P&O Cruises announced on 6th September that it is to take delivery of a new 180,000 tons LNG powered ship in 2020. This nextgeneration ship will be the largest cruise vessel to be built specifically for the British market. The 5,200 guest capacity (lower berths) ship will offer an extensive range of dining, entertainment and relaxing features and is to be built by Meyer Werft at its shipyard in Papenburg, Germany. The newbuild will feature the company’s exclusive “green cruising” design as one of the first generation of cruise ships to be fully powered by LNG, shipping’s most advanced fuel technology, which will significantly reduce air emissions. 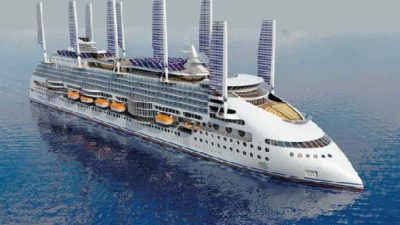 Peace Boat, the Japan-based international non-profit NGO, and classification society DNV GL have signed an MOU forming a partnership that was spawned in 2014 to develop the Ecoship cruise ship. The agreement will see the partners work together on the design, construction and operation phases of Peace Boat’s Ecoship and the promotion of the Ecoship as a flagship for climate action, the Sustainable Development Goals and for sustainability in shipping. Peace Boat aims to create a vessel design and a set of specifications that incorporates the latest environmentally friendly technologies is at the forefront of incoming regulations and offers a transition model towards a lowcarbon economy.

On 16th August the production of a new generation of Mein Schiff ships began at the Meyer Turku shipyard, Finland, with the steel cutting ceremony. The new Mein Schiff 1, NB-1392, will be around 20m longer than the previous Mein Schiff ships and will have space for an additional 180 cabins. Based on double occupancy, this means up to 2,894 guests will be able to enjoy the TUI Cruises well-being cruise experience. In addition the ship will feature various other guest experience and technical improvements. The 111,500gt and 315m long Mein Schiff 1 will be delivered in 2018 and will replace the existing Mein Schiff 1 and Mein Schiff 2 will replace the older ship in 2019. The first two TUI Cruises ships will be handed over within the TUI Group to Thomson Cruises. Meyer Turku shipyard has further enlarged it’s investment package with a new steel storage and pre-treatment facility. This is the third large scale investment announced this year following on from the new Gantry crane and building of a new modernised Cabin Factory on the original Piikkio Works cabin factory grounds. The new steel storage and pre-treatment facility will increase the steel pre-treatment capacity of Meyer Turku, improve dimensional accuracy and increase productivity. The production of the new Steel storage and pre-treatment facility starts in the autumn of 2016 and will be ready in the spring of 2017.

Various news for P&O, TUI Group, Hurtigruten amongst others