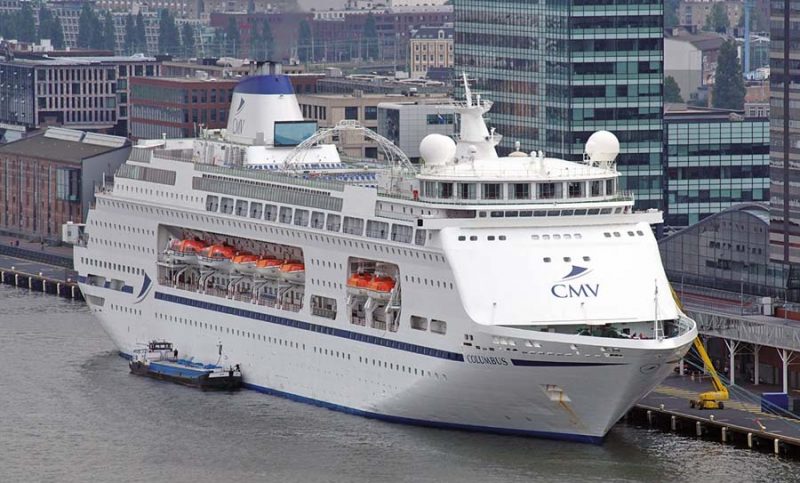 Cruise & Maritime Voyages has cancelled the vast majority of its calls to Amsterdam in summer 2019 and 2020 following a recent announcement by the City Council of Amsterdam to levy a new €8 head tax on ocean cruise tourists (but not river cruise passengers!) from January 2019. CMV becomes the second line to drop Amsterdam, following MSC Cruises, on account of the tax. MSC is also switching to Rotterdam. More than 50,000 passengers from 30 calls of the Columbus, seen in Amsterdam above, and 7 from the Magellan will relocate to Rotterdam. CMV commented that stringent cost controls and long-term planning are key components in achieving the required pricing model. The aggregate lead booking time for passengers is just under a year prior to the departure date with 80% of capacity already sold for 2019. The late introduction of these new charges is therefore not budgeted and simply cannot be absorbed. The local politicians have failed to acknowledge or understand that the cruise industry plans budgets two to three years ahead and have been unwilling to look into a proper implementation schedule. CMV has been a customer of Amsterdam since commencing operations and brought many thousands of cruise tourists to the city. A three-year deal has now been signed with Cruise Port Rotterdam. CMV has launched its 2020 cruise programme ahead of the company’s 10-year anniversary in 2019. Britain’s leading independent cruise line is offering 108 different cruises sailing from 15 UK & Ireland ports in 2020. The classic and ever-popular 16,144gt/1948 built Astoria and 22,080gt/1965 built Marco Polo again feature in the cruise programme alongside the Magellan and Columbus. 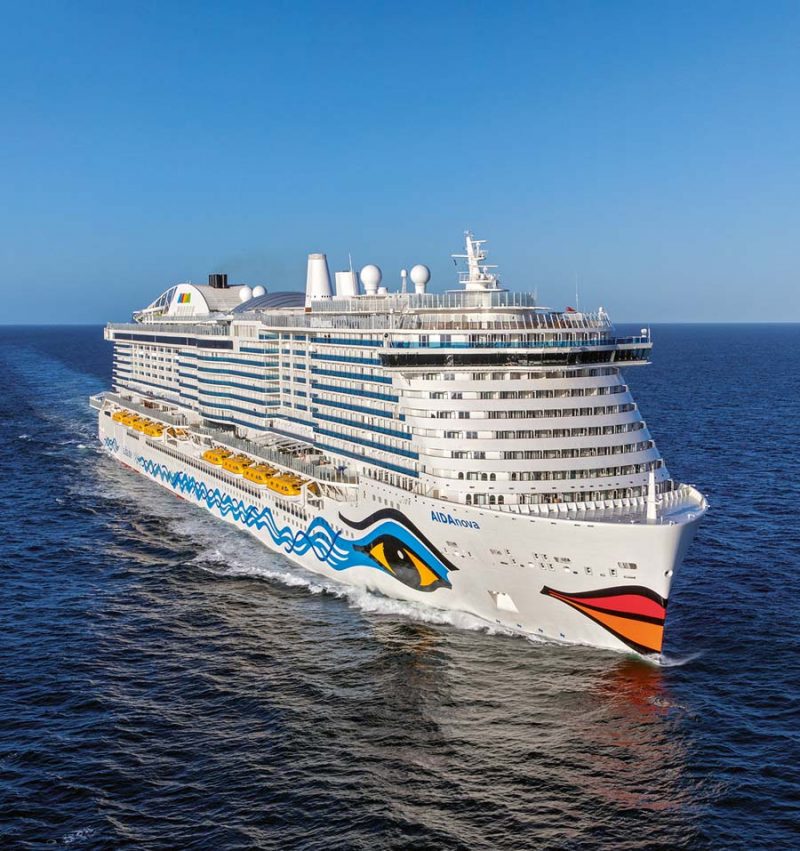 The 183,858gt/2018 built and LNG powered AIDAnova (above) was delivered to AIDA Cruises on 12th December by the Meyer Werft Shipyard during a ceremony at Bremerhaven. The initial delivery, scheduled for November, was postponed in October as the shipbuilder needed more time to thoroughly test all of the ship’s systems in order to ensure smooth operation of the vessel. The first guests were welcomed aboard the 337m long/42m beam/8.80m draught and 6,600 passenger capacity ship at the Santa Cruz de Tenerife Cruise Terminal, Tenerife, on 19th December 2018. Two sisterships will join the fleet in 2021 and 2023. The port is LNG-ready and the first bunkering took place there upon the arrival of the AIDAnova. The new AIDA flagship, which was commissioned on 4th September 2017, has 20 decks, 2,626 staterooms (31 suites/1,655 balconies/1998 oceanview and 312 interior), 17 restaurants, 23 bars and a crew of 1,500. On the occasion of the AIDAnova’s inaugural departure from Santa Cruz de Tenerife the company’s first ship, the 38,557gt/1996 built AIDAcara, was also in port to provide a perfect “then and now” scene. 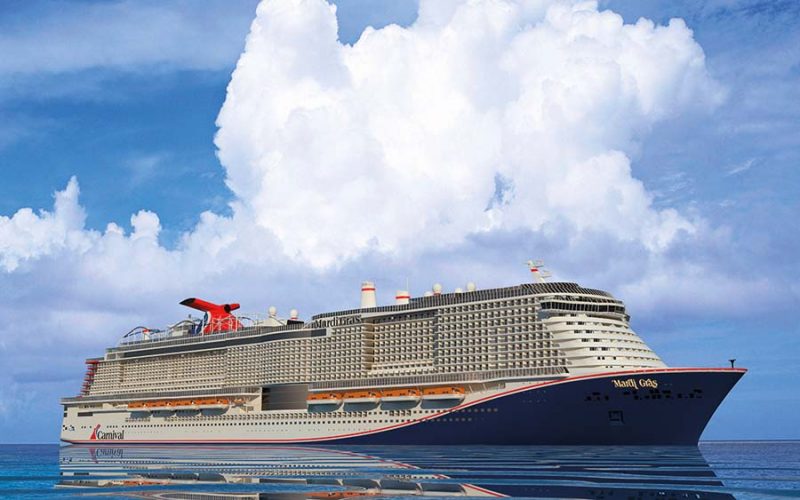 The emphasis for newbuild cruise ships appears to have now shifted entirely from size to guest attractions. As if to underline this, on 13th December Carnival Cruise Line announced yet another cruise industry first, a roller coaster at sea. The XL-Class newbuild Mardi Gras (above) will offer such a unique open-air thrill ride when she is delivered in 2020. Built by Munich-based Maurer Rides, the BOLT™ Ultimate Sea Coaster™ is described as a heart-pounding rush of adrenaline offering nearly 800 feet of exhilarating twists, turns and drops with riders reaching speeds of nearly 40 miles per hour.

BOLT is an all-electric roller coaster that allows two riders in a motorcycle-like vehicle to race along a track 187 feet above sea level, enabling guests to experience the sea in an exciting new way with breath-taking 360-degree views. The ride begins with an action-packed launch where riders can achieve racing car-like levels of acceleration and culminates with a high-powered hair-pin turn around the Mardi Gras’ iconic Carnival Cruises funnel. Riders’ speeds are posted after the race, and just like land-based roller coasters, guests have their photo taken during the ride for a memorable keepsake.

A second XL-Class ship will start construction in 2020 and be delivered in 2022 to mark the 50th anniversary of Carnival Cruise Line’s founding. On 17th December the 133,500gt Carnival Panorama’s exterior completion was celebrated at the Fincantieri shipyard in Marghera, Italy, when a commemorative coin was welded to the ship’s mast in a time-honoured maritime tradition. The coin ceremony (whose origins can be traced back to the ancient Romans who believed that attaching coins to a ship provided divine protection) signifies the successful completion of the 133,596gt Carnival Panorama’s exterior outfitting. The third in the highly successful Vista-class, which includes the 133,596gt/2016 built Carnival Vista and 133,596gt/2018 built Carnival Horizon, is set to debut at Long Beach on 11th December 2019, marking the first new Carnival ship to be based on the West Coast in 20 years. The following day Carnival Cruise Line announced that, for the first time, it will offer a series of cruises from San Francisco, with the 85,942gt.2004 built Carnival Miracle operating a diverse schedule that includes 4-15-day voyages to Alaska, Hawaii and Mexico in 2020. The first-ever schedule from San Francisco kicks off on 19th March 2020 and will include four-day long weekend voyages to Ensenada departing Thursdays and returning Mondays throughout the spring and summer, as well as five-day and six-day cruises to Ensenada, Catalina Island and San Diego in the spring. Carnival Corporation & plc has continued its winning streak as the company achieved record full year earnings. The cruise line’s net income for 2018 was $3.2 billion, rising from $2.6 billion for 2017. Revenues for 2018 were given as $18.9 billion, $1.4 billion higher than the $17.5 billion in 2017. 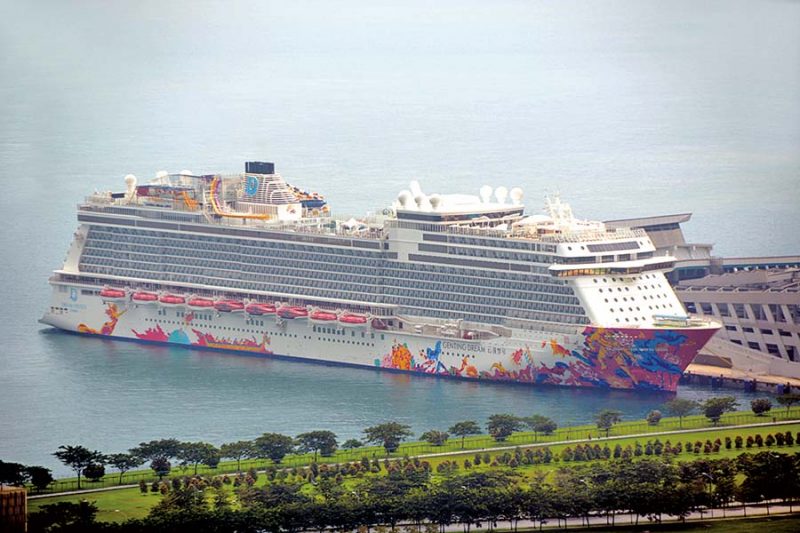 Genting Cruise Lines celebrated its silver anniversary on 14th December with a special event held on board the 150,695gt/2015 built Genting Dream (above) in Singapore to commemorate the very first sailing of Langkapuri Star Aquarius from Singapore in 1993, beginning 25 years of supporting Singapore to become the premier cruise hub in Asia, handling the most international passengers in Asia. The operator was originally founded a quarter of a century ago as Star Cruises. Over the past 25 years, the company has welcomed more than 6.5 million guests on board its fleet through over 7,500 ship calls in Singapore. In the last 12 months, the Genting Dream, the only ship on a year-round deployment in the city, welcomed about 400,000 cruise passengers, of whom 60% were tourists, helping Singapore become the port with the greatest number of international cruise passengers in Asia. The acquisition of Crystal Cruises in 2015 also helped Genting Hong Kong capitalise on the growing global demand in the luxury cruise market. Through significant investment by Genting Cruise Lines, Crystal has embarked on the most ambitious brand expansion in the history of luxury travel and hospitality, introducing two new cruise options (Crystal Expedition Yacht Cruises and Crystal River Cruises) and reaching new heights with Crystal Luxury Air. Looking forward to the next 25 years, Genting Cruise Lines has bought its own shipyards in Germany, MV Werften, and will be building a fleet of technologically advanced cruise ships for its three brands. The first of a fleet of luxurious 20,000gt Endeavor Class expedition vessels will be delivered to Crystal Cruises in 2020, followed in succession by the first of a fleet of 200,000gt Global Class ships for Dream Cruises in 2021, the 67,000gt Diamond Class ships for Crystal Cruises in 2022 and the innovative Contemporary Class ships for Star Cruises in 2023.

In 2018 over 30 new ships were delivered to the industry worldwide and 2019 can expect 24 new deliveries representing 42,488 cruise berths compared to around 34,000 new berths last year.

The biggest project this year, and the biggest dry-dock project ever to take place in the cruise industry, will see the 101,509gt/1999 built Carnival Triumph transformed into the Carnival Sunrise over a two-month period in Cadiz with a budget of $200 million. The ship will debut in Norfolk, Virginia in late April 2019 with additional capacity, and a number of new entertainment and food and beverage features. Royal Caribbean International’s 139,570gt/2002 built Navigator of the Seas will also be “reimagined” with a budget of $115m and then reintroduced into the short cruise market in May 2019. The 111,554gt/2019 built Mein Schiff 2 of TUI Cruises should be the first of the 24 new ships delivered and the largest to be delivered will be the 5,225-passenger capacity and 135,500gt/2019 built Costa Smeralda. Other new arrivals will include the171,598gt/2019 built MSC Bellissima and MSC Grandiosa, the Magellan Explorer, the 16,100gt/2019 built Hanseatic Nature and Hanseatic Inspiration, the 135,500gt/2019 built Costa Venezia plus two luxury 9,976gt/2019 built Explorer Class newbuilds for Ponant.

On 8th January Fincantieri and Norwegian Cruise Line Holdings Ltd. (NCLH) signed a contract for the construction of two new generation Allura Class cruise ships for the Oceania Cruises brand, with delivery scheduled respectively in 2022 and 2025. The agreement has an overall value exceeding 1 billion euros. The ships will be around 67,000gt with capacity for 1,200 passengers and will take the flagship mantle from the 66,084gt/2011 built Marina and 66,172gt/2012 built Riviera that were created at Fincantieri’s Sestri Ponente (Genoa) yard. Besides Oceania Cruises, NCLH also operates the NCL brand, for which Fincantieri is developing the new 6-strong Leonardo Class of ship for delivery 2022-2027. The Group’s other brand is Regent Seven Seas Cruises, for which Fincantieri delivered the 55,254gt Seven Seas Explorer in 2016 from the Sestri Ponente yard and is now building a sister ship, the Seven Seas Splendor, with delivery expected in 2020 in Ancona.

On 5th January the third member of the Meraviglia Class of MSC cruise ships, the MSC Grandiosa (above), was floated out at the Chantiers de l’Atlantique shipyard in Saint-Nazaire, France. When delivered on 31st October 2019, the MSC Grandiosa will become the third in her class but also the first of a Meraviglia-Plus sub-class. The second Meraviglia Class ship arrives in the form of the MSC Bellissima in March. The MSC Grandiosa will showcase an even larger Mediterranean-style promenade (and, at 98.5m, an even longer LED Sky screen), the ground-breaking feature unique to Meraviglia generation ships that serves as the social hub of the ship. Amongst other speciality restaurants it will feature a new bar and lounge, L’Atelier Bistrot, offering lounge seating with a stage and a dance floor, impressionist art on display and terrace seating with Parisian Bistrot tables and chairs. As with the other Meraviglia class ships, the MSC Grandiosa will feature two brand new exclusive shows from Cirque du Soleil at Sea, part of a long-term partnership between MSC Cruises and Cirque du Soleil. 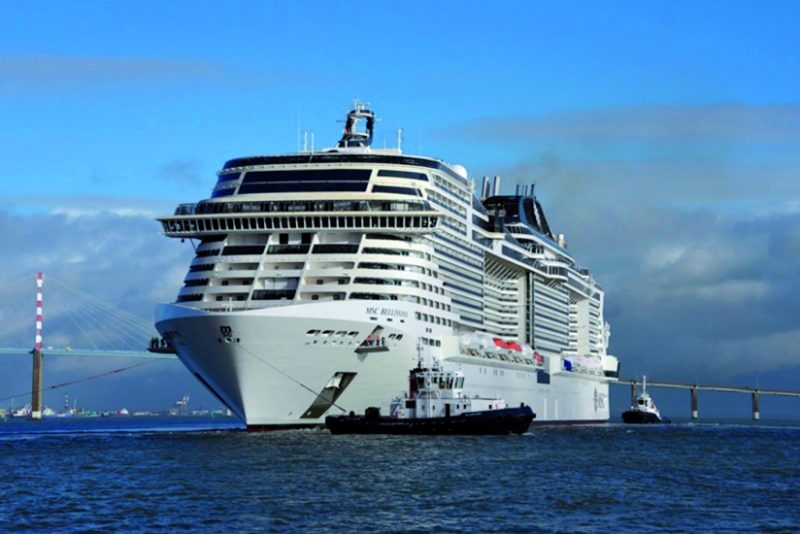 The 171,500gt MSC Bellissima, the second of the Meraviglia generation of cruise ships, being built at Chantiers de l’Atlantique, left the yard on 19th December for her first round of sea trials (above). The ship will be delivered in March 2019.