Aurora Expeditions’ new Polar Class 6 expedition cruise vessel, the Greg Mortimer, had her keel laying ceremony at the China Merchants Heavy Industry (CMHI) shipyard on 12th June. The 104.3m long and 18.4m beam ship is being built for Miami-based SunStone Ships who will charter her to Aurora Expeditions. The ship can accommodate a total of 255 persons, including crew. For expedition cruises in the Polar Regions, the vessel will carry just 120 passengers. The newbuild is named after Aurora’s founder, an Australian mountaineer. Norwegian ship designer Ulstein designed the polar class, X-BOW expedition cruise vessel, and provided the equipment package for one vessel and options for an additional nine units. The company’s 1,753gt/1982 built Polar Pioneer will embark on her final season of sailing the Polar Regions in 2019 as the Greg Mortimer will replace her. The ship was originally built as an ice-strengthened research vessel in Finland before undergoing a significant refurbishment and conversion in 2000 to become a passenger ship able to accommodate 54 passengers.

Fred. Olsen Cruise Lines’ Balmoral, Braemar, Boudicca and Black Watch will rendezvous in Cadiz on 10th September for the company’s long-awaited Captains in Cádiz event. This is the second time that all four of Fred. Olsen’s ocean cruise ships will have assembled together at the same time, anywhere in the world. The 24,344gt/1993 built Braemar made history on 21st June by becoming the largest cruise ship to dock in Murmansk, Russia.

FTI Cruises’ 9,570gt/1980 built Berlin became the first cruise ship to call at the Dutch port of Scheveningen on 5th June. The ship was assisted by the tug Fairplay 1 and local KNRM lifeboat Kitty Roosmale Nepvue performed for the passengers as the ship approached the port.

Hapag-Lloyd Cruises announced on 3rd July that it has ordered a third luxury expedition cruise vessel from VARD Holdings Limited, part of the Fincantieri Group. Developed by VARD in close co-operation with the cruise company, the vessels are specially designed for cruises in Polar Regions in the Arctic and Antarctica, as well as operations in warm water destinations such as the Amazon. The first two 16,000gt, 139m long and 22m beam ships will be delivered in 2019.

Havila requires four ships by 2021 for its new Norwegian coastal service responsibilities. The Norwegian company has entered into an agreement with Barreras of Vigo, Spain, to build two of four vessels with a contract price of around €200 million per 700 passenger capacity/LNG powered ship. 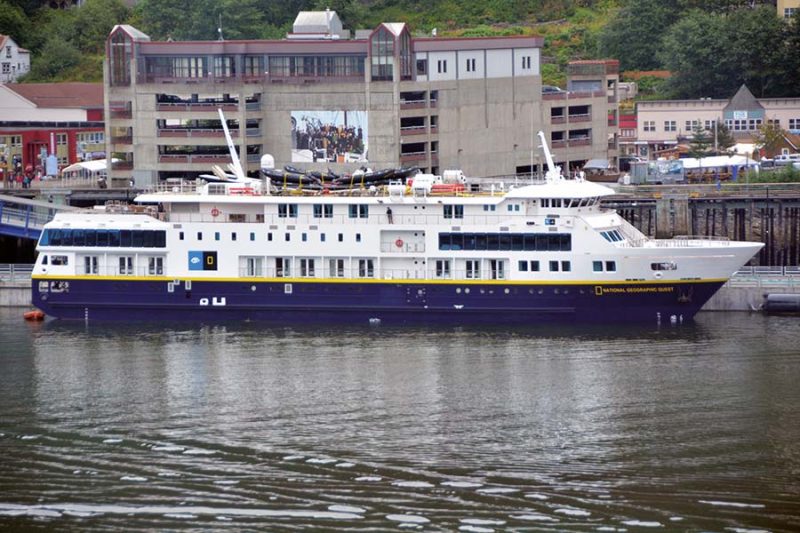 Lindblad Expeditions’ second newbuild and sister ship to the National Geographic Quest (above), the 100-passenger National Geographic Venture, is due for delivery this October. Following inaugural celebrations in San Francisco, the ship will depart on two maiden itineraries on 2nd/7th December that explore the Pacific U.S coast before beginning seasons in Baja, the Pacific Northwest and Alaska.

Cruise ship news from around the world