On 31st August CMV’s 16,144gt/1948 built Astoria arrived at Poole from Le Havre on her maiden call after concluding another charter to French Operator Rivages du Monde. The ship then embarked upon both her first itinerary from Poole and the port’s first UK based cruise departure. The cruise to watch Bournemouth Airshow followed by calls to Honfleur and Rouen was fully booked. When the ship returned on 3rd September Grand Circle Cruises’ 4,077gt/1990 built Corinthian was also in port, a first double cruise call for Poole involving around 1,300 passengers. This same day saw the 1,753gt/1955 built S.S Shieldhall depart back to Southampton, regular calls by the ferries Barfleur (20,133gt/1992), Condor Liberation (6,307gt/2010) and MN Pelican (12,079gt/1999) plus two coasters at the commercial quay with another arriving that evening with a fourth anchored in Poole Bay until the next day. The Astoria had also been part of a CMV double at Honfleur with the 46,052gt/1985 built Magellan two days earlier. After 3 departures from Poole the Astoria moved to Portsmouth and will return to Poole in March 2019, a year that promises a busy cruise season for the port. 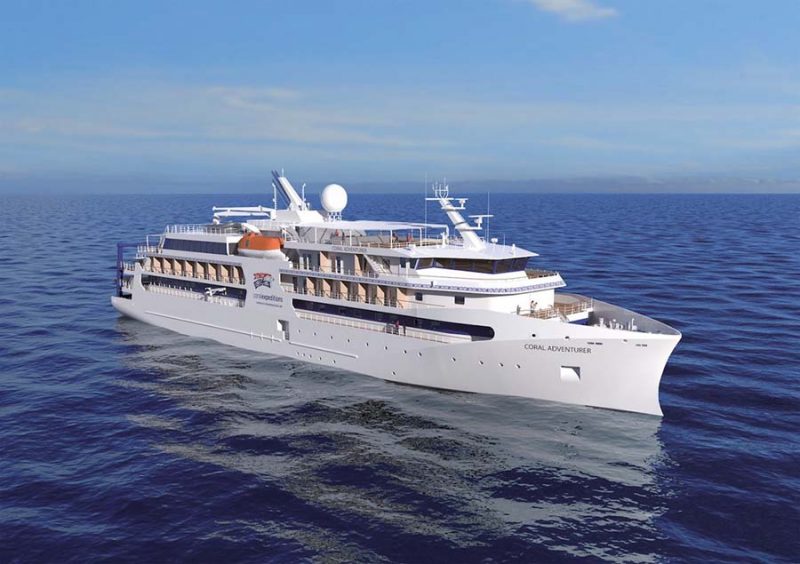 Coral Expeditions released full details in early August of the inaugural season of its newbuild Coral Adventurer (above), which is under construction at the Vard Shipyard in Norway. The vessel will undergo a series of testing and shakedown cruises in March and April 2019 prior to a formal launch ceremony which is scheduled for Singapore on 22nd April. The Coral Adventurer’s maiden voyage has already sold out, and will take 120 passengers on an 18-day expedition through the Indonesian archipelago.

News from various cruise ship companies from around the world