Princess Cruises announced on 17th November the biggest ever season of sailings from the UK for 2018. For the first time, the line will offer over 1 million cruise nights on sailings to northern and southern Europe, a significant increase on recent years. The announcement forms part of Princess Cruises’ 2018 programme, which includes Europe, Alaska, Caribbean, Panama Canal, Canada and New England. Highlightsof the 2018 schedules include: The Sapphire Princess will make her maiden visit to Europe, sailing from Southampton to the Mediterranean and northern Europe and the Royal Princess will return to the UK offering round-Britain cruises. New for 2018 will be late night stays in Belfast and overnight stays in Dublin, Glasgow and Edinburgh. The Pacific Princess will sail from Dover and will offer a new 12-night European capitals cruise, among others, calling at destinations including Amsterdam, Oslo and Copenhagen. For the first time in three years summer Caribbean cruises will be available and Alaska will have its largest ever deployment with seven ships sailing the region from May to September. Also, a longer season of cruises from Southampton will be offered on the Sapphire Princess (16 departures) April-October. The 115,875gt/2004 built ship will sail from Singapore to Southampton on 28th March 2018 on an Indian Ocean and Europe Grand Adventures 38-night cruise. Ports of call include Colombo, Cochin and Dubai. After six months at Southampton she will return to Singapore, providing two opportunities for guests to sail the unique 38-night itineraries. In May 2018 the 142,714gt/2013 built Royal Princess will sail the British Isles roundtrip from Southampton, marking five years since she was named at the port by HRH, the Duchess of Cambridge. The Alaska itineraries total 130 cruise departures in summer 2018. More than 75% of these voyages will sail to Glacier Bay National Park, departing from Seattle, San Francisco, Los Angeles, Vancouver, and Anchorage (Whittier). Also new for 2018, the Island Princess will feature a full season of calls to Icy Strait Point, a unique and remote wilderness experience, on every seven-day northbound Voyage of the Glaciers itinerary. 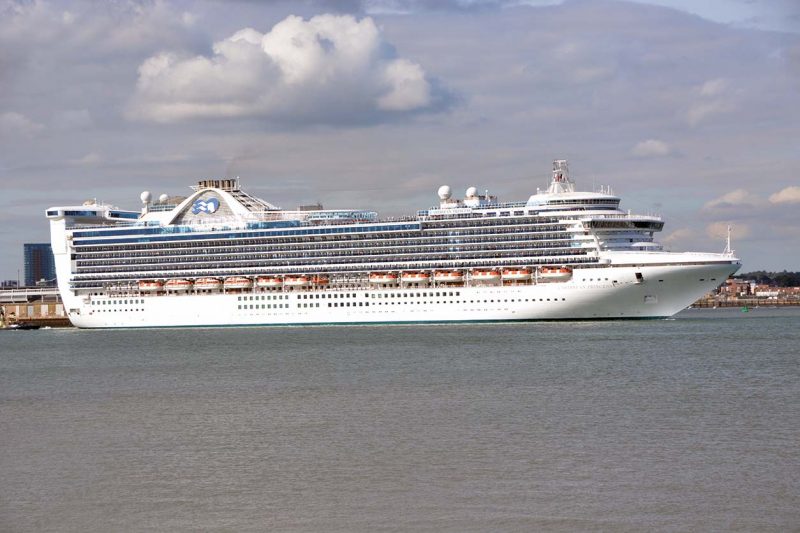 Alas the positive news for 2018 was a little overshadowed by headlines at the beginning of December stating that Princess Cruises had agreed to plead guilty to seven criminal charges stemming from illegal oil dumping at sea and intentional acts to cover it up. The company was ordered to pay a $40 million penalty, the largest-ever such penalty involving deliberate vessel pollution. The charges are linked to the 112,894gt/2004 built Caribbean Princess (above) which visited various U.S. ports. The U.S. investigation was initially launched after information was provided to the U.S. Coast Guard by the British Maritime and Coastguard Agency (MCA) indicating that a newly hired engineer on the Caribbean Princess reported that a so-called “magic pipe” had been used on 23rd August 2013 to illegally discharge oily waste off the coast of England. According to the Justice Dept., after the incident the individual concerned quit when the ship reached Southampton. The chief engineer and senior first engineer reportedly ordered a cover-up, including removal of the pipe and directing assistants to lie. But the MCA shared evidence with the U.S. Coast Guard, including before and after photos of the bypass used to make the discharge and showing its disappearance. The U.S. Coast Guard conducted an examination of the ship upon arrival in New York City on 14th Sept 2013. According to papers filed in court, the Caribbean Princess had been making illegal discharges through bypass equipment since 2005, one year after entering service. Other issues involving other ships in the fleet were also identified. The court penalty is intended to send a powerful message to other companies that the U.S. government will continue to enforce a zero tolerance policy for deliberate ocean dumping that endangers the countless animals, marine life and humans who rely on clean water to survive. Early on 3rd December the 107,517gt/1998 built Grand Princess sustained damage whilst at sea when the starboard side tender platform opened for unexplained reasons. The ship was en-route to Ensenada in Mexico, after leaving Maui on 1st December but subsequently returned to Honolulu in the Hawaiian Islands for the damage to be assessed. The platform could not be closed due to the damage but is not part of the watertight integrity of the vessel so safety was not compromised.

An Ovation Begins After An Encore Is Delivered