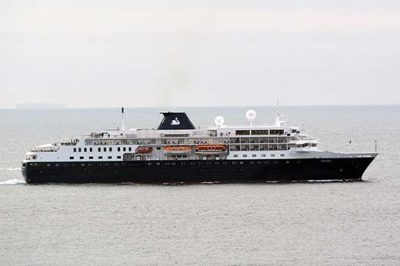 CMV’s 16,144gt/1948 built Astoria (above) will operate her farewell season in Spring 2017 with itineraries from Tilbury to Amsterdam and Antwerp, Springtime Gardens and the River Seine, Land of the Northern Lights, Round Britain and the Majestic Fjords. The forthcoming Columbus will depart on her maiden World Cruise from London Tilbury on 5th January 2018. 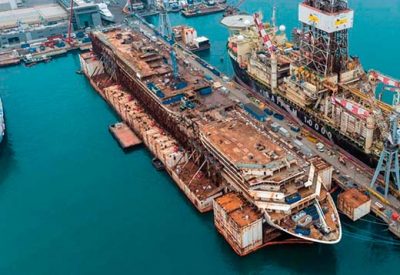 Costa Cruises’ ill-fated Costa Concordia, or what remains of her (above), departed on its final voyage on 1st September from a dry dock in Genoa for final dismantling operations. With the removal of the last two sponsons in late August, preliminary operations for the transfer from the area ex Super Bacino to Dry Dock no. 4, where the vessel will be dismantled over the upcoming months, were concluded.

Crystal Cruises will undertake an historic rendezvous in Sydney Harbour in 2018 when the Crystal Serenity and Crystal Symphony meet up on 17th February as part of their respective world cruises.

Floating Accommodations has been managing the 40,171gt/1982 built former cruise ship Ocean Gala and secured work for her as an accommodation ship. The former Island Escape found this new role in February when Sweden signed a deal to lodge 1,800 asylum seekers aboard the ship in Utansjo, Harnosand, on the Baltic Sea. However, Harnosand municipality vetoed hosting the ship and the Swedish migration board accepted that decision, before scrapping the deal with Floating Accommodation entirely in July, arguing that the necessary requirements had not been met. The Swedish migration agency (Migrationsverket) has refused to pay a 54 million kronor ($6.44 million) bill for the costs of running the ship. The Swedish authority argues that Floating Accommodations defied the initial refusal to have the ship at Utansjo and has been billing Migrationsverket around 800,000 kronor per day since the start of July for the running costs of the ship. The situation rumbles on but the Ocean Gala is now up for sale for around $20 million.