AIDA announced on 29th December that the AIDAperla will be arriving in the Western Mediterranean two months earlier than planned. The ship will enter service from Palma de Mallorca on 1st July 2017, sailing week-long cruises from Palma to Barcelona, also calling on Civitavecchia, Corsica and Livorno. The AIDAperla will be taking over the cruises offered by the 69,203gt/2008 built AIDAbella for July and August, with the AIDAbella moving to Northern Europe. The 125,000gt AIDAperla then moves to Northern Europe for summer 2018, picking up the AIDAprima’s previous itinerary from Hamburg to Southampton, Le Havre, Zeebrugge and Rotterdam. 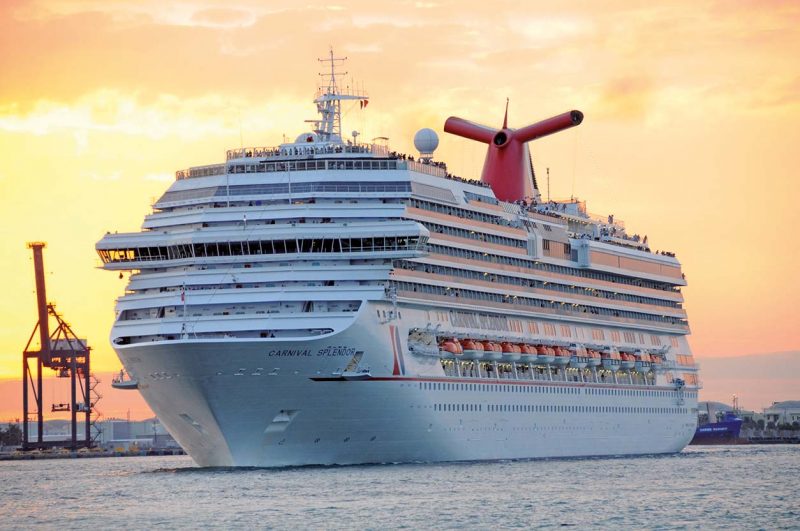 Carnival Cruise Line announced on 15th December that a new 133,500 gt cruise ship, which will be the third vessel in the company’s Vista class series, will join the Carnival Cruise Line fleet in late 2019. The ship, under contract with Italian shipbuilder Fincantieri, was originally designated for the P&O Cruises Australia brand. In conjunction with this change, Carnival Cruise Line’s 113,562gt/2008 built Carnival Splendor (above) will be transferred to P&O Cruises Australia in late 2019. The ship will offer many of Carnival’s most popular guest features, a wide range of accommodation types and a number of new innovations unique to this vessel. The ship’s name, homeport and itinerary details will be announced at a later date but she will follow a year after the Carnival Horizon, due for delivery in 2018. The Carnival Corporation has reported the most profitable year in the company’s history and record fourth quarter earnings. The corporation generated $2.8 billion in net income for the full year 2016, an extra billion on the prior corresponding period. Revenues for the full year 2016 were $16.4 billion, $700 million higher than the $15.7 billion in 2015. On 12th January Carnival Cruise Line announced that it will reposition three of its newest and largest ships to new homeports in 2018. In September 2018 the Carnival Vista will move to Galveston, the Carnival Breeze will reposition to Port Canaveral, and the Carnival Magic will relocate to Miami.

CDF Croisieres’ office in Paris closed by the end of February and the operator’s two ships, the Horizon and Zenith were transferred to Pullmantur’s fleet as they concentrate on the Spanish and Latin American markets.

CroisiEurope announced in December that the construction of a third paddlewheel ship, the MS Elbe Princesse II, has officially begun at the STX shipyard in Saint-Nazaire. Following a four-month design phase, the steel cutting ceremony was held in Saint-Nazaire on 8th December. As a result of the success of the Loire Princesse in 2015 and the Elbe Princesse in 2016, CroisiEurope is building the Elbe Princesse II in order to increase it’s offering between Berlin and Prague on the Elbe and Vltava rivers. The ship will be 101m long with a 10.5m beam. Taking into consideration the navigational limitations of these rivers, the ship has a shallow hull draught, a low air draught and a ballasting system. Powered by paddlewheels, her cruising speed will be 15-16km per hour. The ship’s sleek, contemporary design will be very similar to her sister ship, the Elbe Princesse, with open spaces, large picture windows and modern colours bringing a touch of elegance. The ship will accommodate 90 guests in 45 comfortable, outward-facing cabins of more than 14m2 with French balconies on the upper deck. There will also be a 110m2 restaurant, a 145m2 panoramic lounge at the stern, a patio and a 1000m2 sun deck. The Elbe Princesse II is scheduled for delivery in February 2018. Like the Elbe Princesse, this newbuild will cruise between Berlin and the heart of Prague.

Aida, CDF Croisieres, Hapag LLoyd, MCS Cruises and others are included in this month's roundup