AIDA Cruises: While returning from one of her roundtrip cruises out of Hamburg the 125,572gt/2016 built AIDAprima encountered bad weather generated by Storm Egon on 15th January, with north-westerly winds of up to force 10 off the island of Borkum. Three passengers were hurt. The AIDAprima ran in tandem with the 38,557gt/1996 built AIDAcara in the North Sea on 10th February as both headed for Hamburg (above).

Carnival Cruises’ 85,942gt/2002 built Carnival Legend has earned a unique distinction of calling at two ports which are the furthest apart. This was achieved when she visited Fjordland National Park on New Zealand’s South Island in February. The location is more than 11,000 miles from the Carnival Legend’s northernmost port of call, Reykjavik, Iceland, which she visited in 2013. The ship is also Carnival’s most travelled member of the fleet.

Dream Cruises announced on 19th January that the Genting Dream is to be home ported year-round in Singapore starting from 3rd December 2017. This marks a first for Singapore to host a brand-new and large-scale 150,695gt cruise ship year-round. Prior to this, from 2nd April 2017 the Genting Dream will operate from her dual homeports of Hong Kong and Nansha on 5-night voyages to the idyllic destinations of Naha and Miyakojima in Okinawa, Japan. Continuing through the summer, guests who are looking for a quick escape can also enjoy a two-night weekend cruise sailing from the cosmopolitan metropolis of Hong Kong.

Emerald Waterway’s new ships will nearly double its fleet with the debut of three river cruisers in April and May. The Emerald Destiny will be the company’s fifth Star Ship when she debuts in April and be identical to the Emerald Sky, Star, Sun and Dawn. Also making an entrance in April, the Emerald Liberte will accommodate 138 passengers and sail in southern France. Finally, the new Emerald Radiance will make her inaugural sailing in May. The 112-passenger vessel will operate an 8-day Secrets of the Douro itinerary. 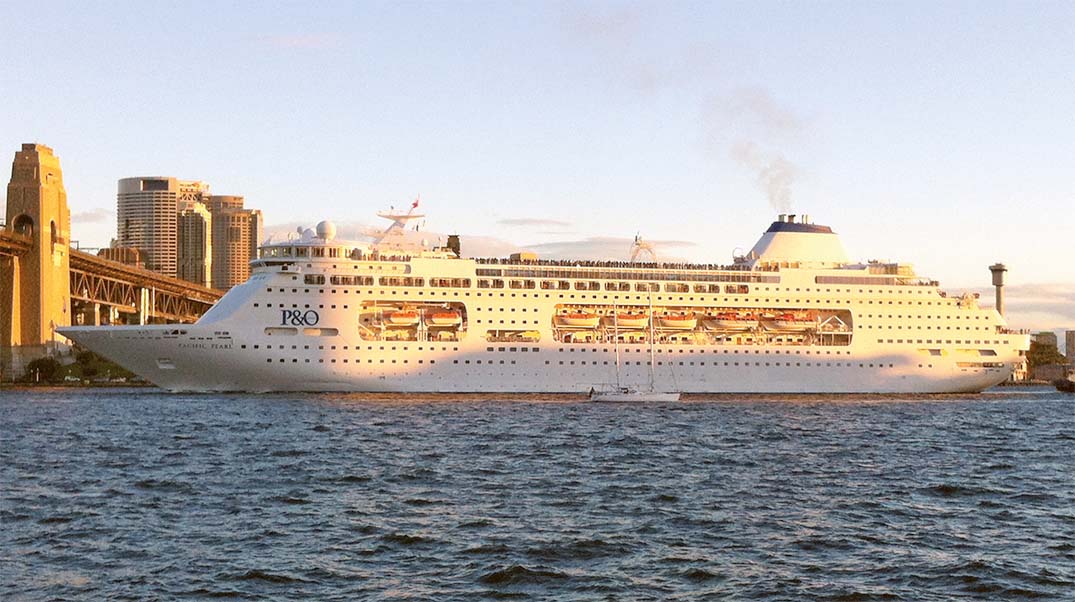 P&O Cruises’ (Australia) 63,786gt/1989 built and 1,800 passenger capacity Pacific Pearl (above) bid farewell to Sydney for the final time during the week beginning 30th January prior to transferring to CMV. The Pacific Pearl joined P&O’s fleet in December 2010 and leaves the fleet in April via a a farewell cruise from Auckland to Singapore, after completing 294 separate voyages with P&O Cruises Australia.

MSC Cruises is to develop an LNG bunkering system for its cruise ships after striking a partnership with ARTA. The two companies revealed their new partnership at the 2017 LNG Bunkering Summit in Amsterdam. With up to four LNG-powered cruise ships scheduled to join the MSC fleet, the company is highly committed to developing the best possible technologies and systems to support the introduction of LNG to cruising. In ARTA, the company has found a partner that matches its focus on innovation and the best maritime technology at sea. The result is a system that features a newly developed coupling and decoupling mechanism and a double-walled hose that will allow MSC Cruises to conduct bunkering operations without disrupting the activities taking place on board the ship. MSC’s first LNGpowered vessel is scheduled for delivery in 2022.

Princess Cruises’ 113,561gt/2007 built Emerald Princess suffered a gas canister explosion on 9th February whilst alongside at Port Otago near Dunedin in New Zealand. Reports indicate that technical work was being done at the time on the hydraulic launching system on a tender vessel. Alas one crewmember was killed in the accident.

Royal Caribbean International revealed on 23rd January 2017 that it is now the only cruise line in the world with onboard PADI (Professional Association of Diving Instructors®) Five Star Dive Centres, allowing guests to become certified scuba divers whilst on holiday. Adventure seekers can dive straight in, exploring hundreds of storied shipwrecks in destinations, like St. Thomas and the British Virgin Islands, and some of the most vibrant and renowned coral reefs across the Caribbean, including the Belize Barrier Reef, the second largest barrier reef in the world. On 4th February RCI confirmed more sailings to Cuba on the 48,563gt/1990 built Empress of the Seas. The company has expanded its Caribbean itineraries sailing from Tampa, to include new 4 and 5-night cruises with day and overnight visits to Havana, along with stops in Key West, Florida, and Cozumel, Mexico. The new sailings are available until 4th November 2017.

Russia will reportedly commence a cruise line that sails to Crimean Ports and The Black Sea. The ship linked with the new venture is the 9,159gt/1971 built Roy Star via a suggested partnership with Sovfracht and Rosmorport. The launch of the cruise line would bring much needed passenger traffic and economic growth to the Black Sea area having suffered since geopolitical issues took place in the Ukraine. The ports of call have been indicated as Yalta, Sevastopol and Istanbul, with the ship based in Sochi. 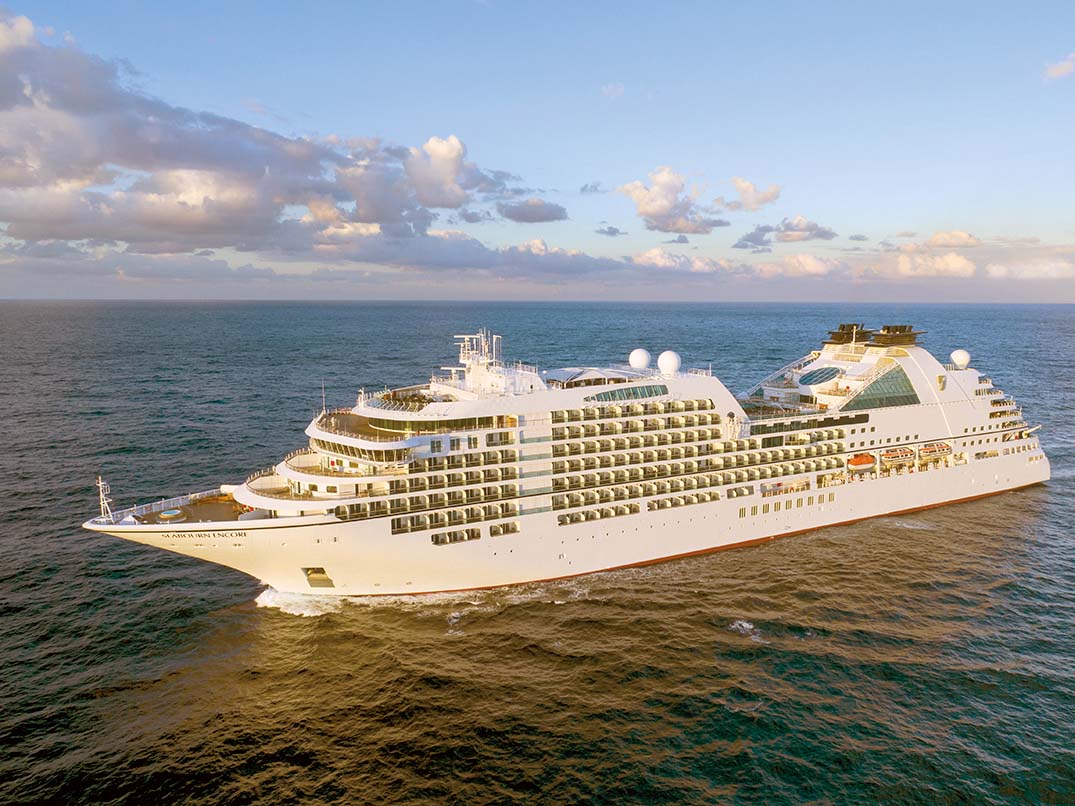 Seabourn’s new luxury 41,685gt/2016 built Seabourn Encore, (above) which was christened in Singapore in January, collided with a ship in the port of Timaru, New Zealand on 12th February. The ‘Encore reportedly broke free from her mooring ropes due to strong winds and drifted across the dock before hitting the 6,200gt/1987 built cement carrier Milburn Carrier II. The cruise ship then became stuck across the dock before being repositioned by tugs. Most passengers were ashore but both vessels sustained damage.

Silversea Cruises’ newest ship, the 40,700gt Silver Muse will arrive at Florida’s Port Everglades cruise port on 12th October 2017 and the facility will continue to serve as Silversea’s winter homeport for the next two years. In addition to voyages operated by the Silver Spirit, Silver Whisper and Silver Wind also from Port Everglades, the 596-passenger Silver Muse is scheduled for five sailings next year. The construction of the Silver Muse began at Fincantieri’s Sestri Ponente shipyard in Genoa in July 2015. Launched in July 2016, the ship is scheduled for delivery in May 2017.

Star Clipper’s 300-passenger capacity newbuild Flying Clipper will be delivered in the first quarter of 2018 after the delivery of the newest fleet member has been pushed back from August 2017.The vessel is being built by the Brodosplit Shipyard in Split, Croatia.