Costa Cruises announced on 3rd August that the 75,166gt/1996 built Costa Victoria will leave the Chinese market and return to Europe for Balearic Islands itineraries as from late March 2018. At that same time the 53,015gt/1991 built Costa neoClassica is to leave the fleet. The Costa Victoria will take over the Costa neoRiviera’s cruise program, while the 48,200gt/1999 built Costa neoRiviera will take over the neoClassica’s programme. The Costa neoClassica is the oldest ship in the Costa fleet but her buyer has not yet been named.

Disney Cruise Line has decided to further expand its fleet by adding a third vessel to its order book. The first two vessels under the company’s next phase of expansion were ordered in March 2016 from the Meyer Werft shipyard in Germany. The new ship will also be constructed by the same yard. The ship names, design plans and itineraries are still in development. The three new 135,000gt ships will be powered by LNG and will offer 1,250 guest staterooms.

Fred. Olsen Cruise’s 28,613gt/1972 built Black Watch returned to Rosyth for another cruising season from 14th August with a sevennight Lochs of Scotland sailing. In total, the company offered eight cruises from Rosyth between August and 14th October, an increase of one turnaround call compared to 2016. New to the Rosyth itineraries this year were two river cruises, German Waterways and French Rivers. The Black Watch has benefitted from an extensive multi-million pound refurbishment, and now offers guests improved facilities on board, including a new informal dining area, Brigadoon, and the creation of a new speciality dining restaurant, The Black Watch Room, as well as an upgraded Glentanar main restaurant and new 3D-enabled Marina Theatre. In 2018/19, Fred. Olsen will be reinforcing its commitment to Rosyth by introducing the 45,437gt/1988 built flagship, the Balmoral, which will make her debut at the port in May 2018. 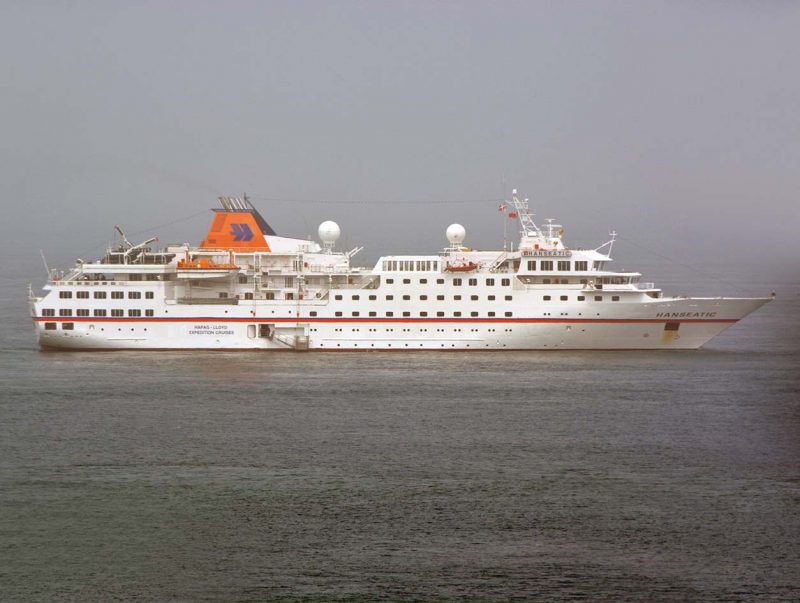 One Ocean Expedition is to expand its capacity by 40-50% in 2019 when another vessel is chartered to operate alongside the Akademik Ioffe and Akademik Sergey Vavilo, a pair of Russian research vessels. The RCGS Resolute is better known as the 8,378gt/1991 Hanseatic (above) of Hapag-Lloyd Cruises. The Canadian operator is chartering the ship with options extending through 2028. The ship will debut for One Ocean Expeditions in the Antarctica market in November 2018 having concluded her final Hapag-Lloyd Cruises season in September 2018. The RCGS Resolute was ordered in 1989 for Society Expeditions for a June 1991 delivery as the Society Adventurer, with a second ship planned to follow a year later. The ship was never delivered to her intended owner and was then saleslisted, finding a charter with Hanseatic Tours of Germany in March 1993. The ship was renamed Hanseatic and Hanseatic Tours was purchased by Hapag-Lloyd four years later.

Various news from Disney, P&O, TUI and much more