Carnival Cruise Line has been given the go-ahead to begin sailing to Cuba as from June 2017. The Carnival Corporation made history in May 2016 as the first U.S cruise company to sail to Cuba in over 40 years with its Fathom brand, using the 30,277gt/2001 built Adonia, which is operating from Miami to Cuba through to May 2017 when she returns to the P&O Cruises stable. Carnival Cruise Line plans to deploy the 70,390gt/1998-built Carnival Paradise for a series of four and five day voyages out of Tampa in the second half of 2017 that will include a daytime and overnight visit to Havana. The first four-night cruise departs on 29th June. The 2,052-passenger Carnival Paradise will become the largest cruise ship in history to sail from the U.S to Cuba’s capital.

The 70,538gt/1993 built Carnival Sensation (above) completed a multi-million-dollar refit at Freeport, The Bahamas, in February and emerged with a variety of popular food and beverage concepts, as well as a new nautical-themed children’s play area. The Carnival Sensation resumed her year-round schedule on 23rd February of four and five day cruises from Miami and is the third Carnival ship to undergo a refurbishment in 2017 after the Carnival Dream and Carnival Ecstasy.

The 113,562gt/2008 built Carnival Splendor experienced technical issues on her cruise that departed Miami on 26th February. She had to sail at reduced speed and therefore missed calls at St. Thomas and Amber Cove to ensure an on schedule return to Miami on 5th March. 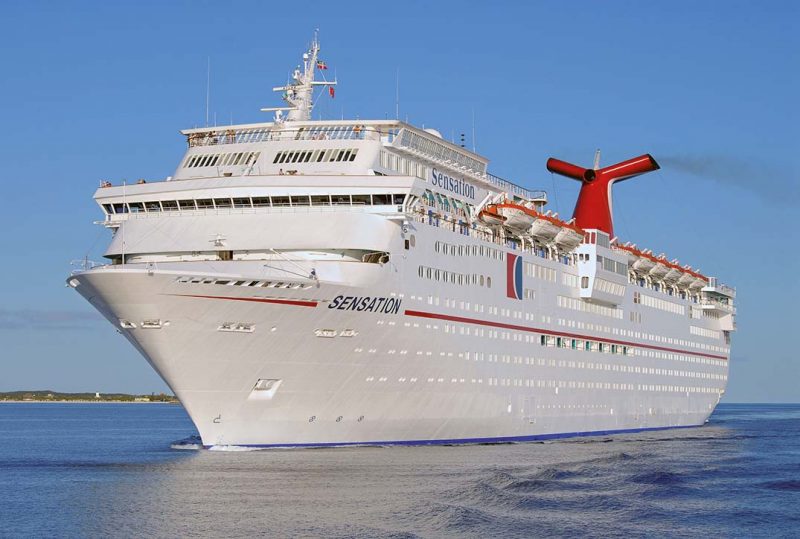 CMV’s 46,052gt/1985 built Magellan sailed into Sydney on 23rd February as part of a two day visit on her world cruise. More than 500 people are taking the whole 120 night cruise which began at the London Cruise Terminal on 5th January and will return to Tilbury on 5th May. 255 people joined the ship in Sydney.

CMV’s new fleet addition, the Columbus, that joins the fleet in June this year, will depart on a similar world cruise in 2018.

CMV have also announced that the 16,114gt/ 1948 built Astoria will be back offering cruises for the company in spring 2018 after strong public demand and excellent passenger feedback. This classic style ocean liner carries just 550 guests. The ship arrived at LICT, Tilbury on 7th March from refit in Lisbon in readiness for her first CMV cruise of the 2017 season two days later.

Crystal Cruises’ 3,370gt/1991 built Crystal Esprit conducted a rescue at sea on 16th February after responding to a distress call in the Seychelles Islands. The ship rescued 12 French nationals and brought them on board. The group’s catamaran was dragged from its mooring buoy and ran aground close to shore. The area was experiencing extremely inclement weather causing fatal damage to the catamaran which the group ultimately had to abandon, and faced potential loss of life.

Cunard Line unveiled plans in March to base the 90,901gt/2010 built Queen Elizabeth in Australia for two months in 2019, marking the longest deployment in Australian waters for any vessel from the company.

Fred. Olsen Cruise Lines announced on 1st March that, in 2018/19, its fleet of four ships, the Balmoral, Braemar, Boudicca and Black Watch, will be visiting no fewer than 228 destinations in 73 countries around the globe, covering 91 areas of scenic cruising, from the UK departure ports of Southampton, Dover, Liverpool, Newcastle and Edinburgh (Rosyth). The new 2018/19 itineraries went on general sale from 9th March 2017. Hurtigruten marked the official start of construction of its new class of Explorer-class ships on 23rd February as company CEO Daniel Skjeldam was on hand to get things underway at the Kleven Shipyard in Norway. Steel was cut for the first of two ships, the Roald Amundsen, which enters service in summer 2018. A sister ship follows in 2019, and the company has an option for two additional 20,000-ton, 600-passenger vessels. The cost of the ships is estimated at $220 million each and they will be the first cruise ships in the world to utilise hybrid power with a battery system capable of propelling the ship for up to 30 minutes at a time.

P&O Cruises Australia’s 70,285gt/1991 built Pacific Dawn commenced a multi-million dollar refurbishment at the Sembawang Shipyard in Singapore. The ship departed from Singapore on 2nd March and arrived in Brisbane on 16th March to begin her year-round season from the Australian port.

Phoenix Reisen’s 28,518gt/1973 built Albatros rescued six fishermen off New Zealand in early February. The fishing vessel from Tonga was described as being in extreme distress because of engine damage and had to be left behind. The position data was sent to the New Zealand Coast Guard, which was also involved in the search. Passengers and crew aboard the Albatros donated €8,134 and $2,143 respectively to the fishermen, and Phoenix Reisen added another €5,000.

P&O Cruises will base the 77,499gt/2000 built Oceana in Dubai in January 2019, the first time that the company has based a ship in the Arabian Gulf. The partial season will run from 10th January to 4th April 2019 with the Oceana sailing five 10-night cruises from Dubai. If the season proves a success, the line will offer a full season of cruises on the 2,000-passenger ship from October 2019 to April 2020.

Ponant’s 10,944gt/2011 built L’Austral has been investigated by New Zealand’s Maritime Authorities after the ship hit an underwater object on 9th February while entering Milford Sound. The vessel was under direction of the pilot and there was a slight hull deformation but no breach of the hull. 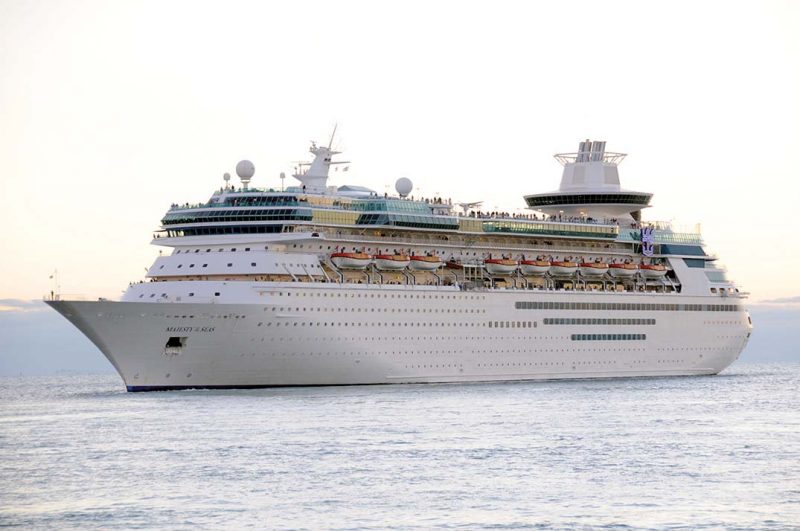 Royal Caribbean Cruises’ 74,077gt/1992 built Majesty of the Seas (above) was detained at Port Canaveral on 13th February following a US Coast Guard inspection. The Inspectors found issues with the condition of some of the vessel’s life-saving equipment and asked that the problem be resolved before the ship was allowed to continue sailing. The replacement equipment arrived the following day, allowing the ship to depart for the Bahamas a day late.

Royal Caribbean has decided to cancel all scheduled stops in Turkey for the 2017 cruise season, citing ‘unpredictability in the country’. As a result, calls in Ephesus (Kusadasi) will be replaced by alternate ports-of-call for the 2017 Europe season. 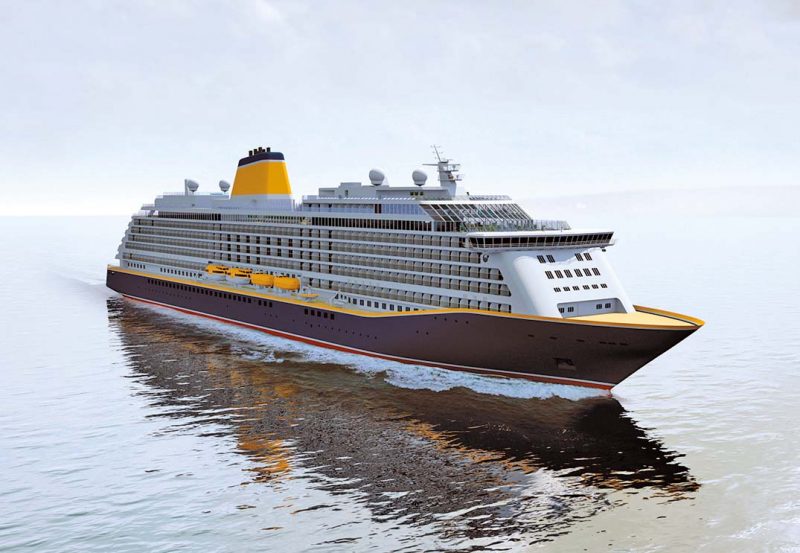 Saga Cruises released an artist’s impression of its new ship on 17th February (above). All 540 cabins will feature a balcony, 20% of accommodation will be for solo travellers and the Britannia Lounge will be a ‘magnificent signature space’. The new ship itineraries will be on sale in September 2017. The thoughts and recommendations of passengers have been incorporated into the design and the sleek ship will carry fewer than 1,000 passengers. Features will include single-sitting dining in a choice of speciality restaurants, a selection of bars, indoor and outdoor pools, a spa, a library, an observation lounge etc. The cabins will be a real showcase, designed to be spacious and modern with a fresh and contemporary twist. The keel laying ceremony will take place in late summer 2018 with delivery following in 2019.

Seabourn announced on 15th February that it will resume itineraries to Alaska in May 2017 after an absence of 12 years. Five separate sailings to Alaska and into Glacier Bay are available aboard the 32,477gt/2010 built Seabourn Sojourn during the 2017 season. The cruise schedule includes a 21-Day Kuroshio Route & Alaska cruise from Kobe, Japan to Seattle, an 11-Day Ultimate Alaskan Sojourn from Vancouver to Seward. Additional itineraries include 26th June, 21st July and 15th August.

Silversea’s 40,700gt Silver Muse successfully completed her sea trials from her shipyard in Genoa, Italy, at the beginning of March ahead of her formal christening in Monaco on 19th April. The ship underwent extensive speed, vibration, noise, endurance and propulsion tests.

Viking Cruises’ Viking Spirit took a step towards reality on 16th February when the keel laying ceremony for this, the fifth of six cruise ships Viking Ocean Cruises has ordered from Fincantieri, was held at the shipyard in Ancona. The first 11m long, 28.80m wide and 280t building block of the ship is part of the central section of the 47,800gt and 946 passenger capacity Viking Spirit, due for delivery in 2018.

Includes Saga, Cruises, CMV, Cunard Line and P&O amongst others