Another Newbuild For P&O Cruises

On 25th January P&O Cruises confirmed an order for a second LNG powered new ship in a bid to become “Britain’s number one holiday choice.” A shipbuilding contract signed by P&O Cruises’ parent company, Carnival Corporation plc, with leading Shipbuilder Meyer Werft GmbH of Papenburg, Germany, will see the new ship delivered in 2022. Similar to a sister ship due for delivery in 2020, this second newbuild will be the largest cruise ship to be built specifically for the British market. Both new vessels will be registered in the UK. The new ship will be in excess of 180,000gt and will accommodate approximately 5,200 guests. 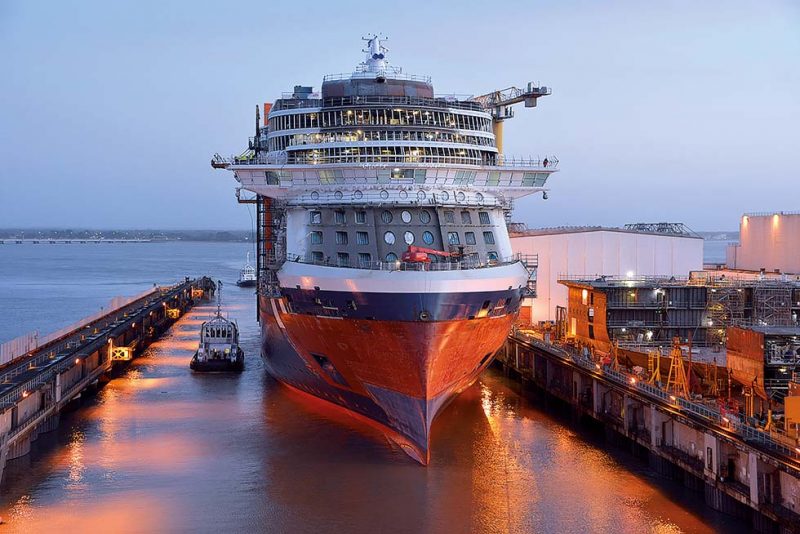 On 23rd January Celebrity Cruises’ innovative new 306m long Celebrity Edge was floated out of her dry dock at the STX France shipyard in St. Nazaire, France (above). The float out process took place 7 months after the keel laying and marked another milestone in the building of the ship with attention now turning to the internal fitting out process. The ship is set for delivery in October before making her debut at Fort Lauderdale on 21st November.

Royal Caribbean Cruise Lines’ Oasis Class ship Symphony of the Seas had her sea trials delayed from 19th January due to bad weather The STX France shipyard originally planned for the Symphony of the Seas’ first sea trials to take place on 19th January but this was postponed by 24 hours. However, prevailing bad weather prohibited departure on that occasion as well. So, due to specific tidal conditions being required to allow the ship to depart the shipyard, the trials were put back a further four weeks. Delivery is scheduled to take place in late March.

Norwegian Cruise Line will base the new Norwegian Bliss in New York for the winter 2019-2020 cruise season after her second summer in Alaska. The ship will be the largest in the market with 18 cruises on offer through early 2020, with itineraries ranging from 7 to 14 days. The Norwegian Bliss will enter service during summer 2018 in Alaska, and will homeport in Miami for winter 2018-2019.

NCL got their ultimate Breakaway Plus Class vessel underway at German shipbuilder Meyer Werft on 31st January when the steel cutting ceremony took place for the Norwegian Encore. At approximately 167,800gt and accommodating 4,000 guests, the ship will offer seven-day Caribbean cruises each Sunday from PortMiami seasonally beginning in the autumn of 2019 and will not be based in China as originally indicated. Once delivered on 31st October 2019, the Norwegian Encore will become the 17th ship in the Norwegian Cruise Line fleet and the line’s fourth and final ship in the Breakaway Plus Class. NCL will also deploy the largest ship to serve San Juan, Puerto Rico, 8th December 2019-15th March 2020. The 155,873gt/2010 built Norwegian Epic is the ship in question and she will operate 7-day Southern Caribbean voyages plus extended 10-11 day itineraries.

Includes P&O, NCL and Celebrity Cruises amongst others