Cunard Line honoured the 50th anniversary of its longest serving ocean liner, the 70,327gt/1969 built QE2, with a special voyage onboard the 90,901gt/2010 built Queen Elizabeth. The 50th anniversary of this much-loved ship was remembered as the Queen Elizabeth departed from Southampton on 8th September for a 17-night voyage. When the QE2 came into service in the 1960s, many critics said she wouldn’t last a decade in the age of the jet but her unique design as a dual-purpose ship meant that she was versatile enough to operate both as a transatlantic liner and a cruise ship. Celebrations during the cruise focused on five special theme days, each of which were accompanied by QE2 inspired menus, talks from special guests, historical snippets in the daily programme, past-passenger gatherings and QE2 quizzes. Themes include Moving in Royal Circles which looked back at the unique and special bond between QE2 and the Royal Family, The Falklands which acknowledged the ship’s service as a troop ship in the 1982 conflict, Triumph of a Great Tradition examining the QE2’s remarkable career achievements and the long history of Cunard ‘firsts’, and World Flagship in tribute to QE2’s 26 world cruises that made her an icon in cities across the globe. The celebrations culmi­ nated on QE2 Day, 20th September 2017, exactly 50 years since the ship was launched by Her Majesty Queen Elizabeth II. Events included a QE2 ball, and a historical retrospective of the ship’sservice life hosted in the Queen Elizabeth’s 850 seat Royal Court Theatre.

BREMEN HEADS FOR THE POLE 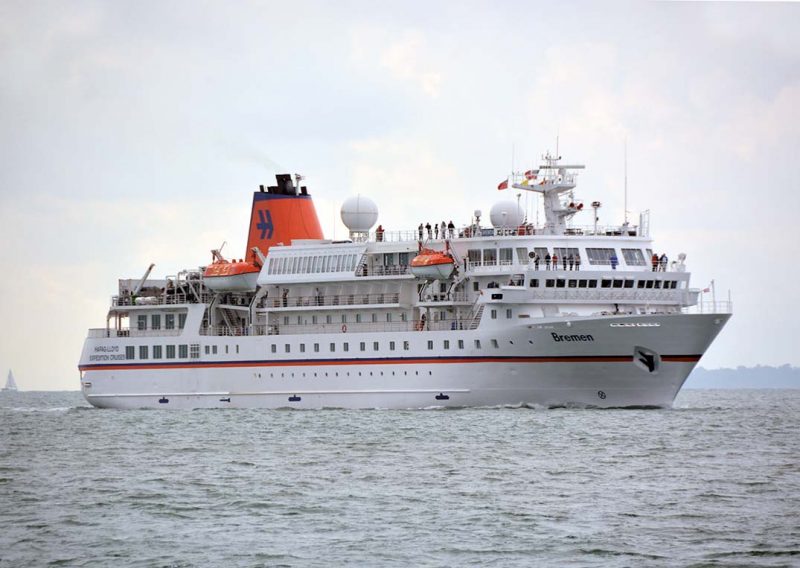 Hapag-Lloyd Cruises’ announced in August that the 6,752gt/1990 built Bremen (above) had become one of the first passenger ships in the world to receive the Polar Ship Certificate, which is mandatory for ships operating in polar regions. The Polar Code will improve the safety of navigation in polar waters significantly and the company had taken a pioneering step in certifying the Bremen, paving the way for the other ships in the fleet to comply by the Arctic season of 2018. 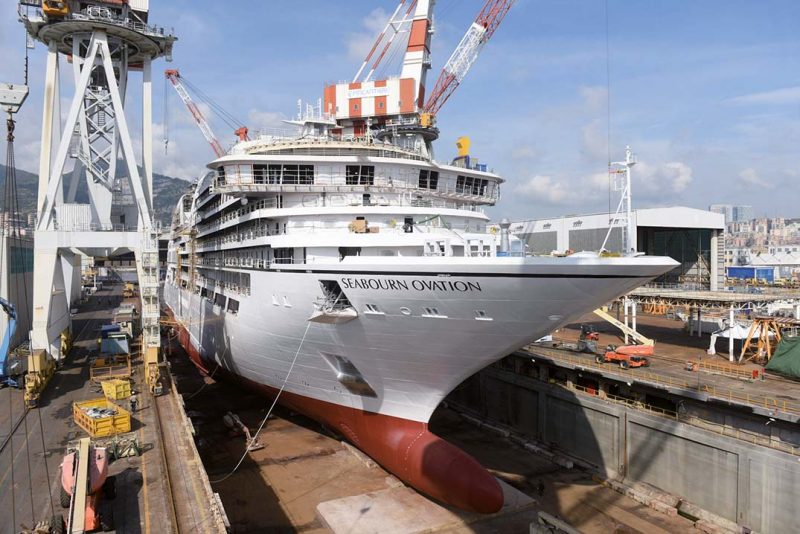 On 1st September the Seabourn Cruise Line newbuild Seabourn Ovation (above), the second of two ultra-luxury cruise ships that Fincantieri is building for this Carnival Corporation brand, was launched at Fincantieri’s shipyard in Sestri (Genoa). The ceremony was attended, among others, for the ship owner by the President Richard Meadows, while Fincantieri was represented by the Director of the Genoa Sestri Ponente shipyard Paolo Capobianco. The 41,865gt, 21Om long and 28m beam Seabourn Ovation, which is due to join the Seabourn fleet in spring 2018, will feature modern design elements and innovations and will be built according to the standards and cutting-edge technical solutions that make Seabourn one of the most prestigious brands in the ultra-luxury segment, containuing the fleet modernisation started in 2009. Her sister ship, the Seabourn Encore, was delivered by Fincantieri at the end of 2016 from the Marghera shipyard (Venice). The ship will be able to reach a cruising speed of 18.6 knots, will carry up to 600 guests (based on double occupancy) and every suite will have a private veranda.

On 6th September German shipbuilder Meyer Werft lowered the first building block into place for the AIDAnova, the first cruise ship in the world to operate solely on LNG, being equipped with four dual fuel engines. The traditional lucky coin was placed under the first of a total of 90 blocks. The event marked the official start of construction for a total of seven next-generation LNG powered cruise ships for four of the ten cruise ship brands owned by Carnival Corporation. The ships will serve Carnival Cruise Lines, Costa Cruises, P&O Cruises and AIDA Cruises and will be built by Meyer Werft in both Papenburg and Turku (Finland) and will be commissioned between 2018 and 2022. The 180,000gt AIDAnova’s premiere season will offer trips around the Canary Islands as from December 2018. Her sistership is set to be commissioned in the spring of 2021. Thanks to their dual-fuel engines, the AIDAprima and AIDAperla became the world’s first cruise ships to operate on LNG whilst in port. The 125,572gt/2016 built AIDAprima was one of the guests at the Hamburg Cruise Festival on 9th September. The 300m long and 37m beam ship lead the grand parade in the evening and was also part of the spectacular Blue Port light show. The AIDAprima arrived at the Steinwerder Cruise Terminal at 08:00 that morning. Other participants included the Norwegian Jade and Europa.

CRUISING AROUND THE STORMS 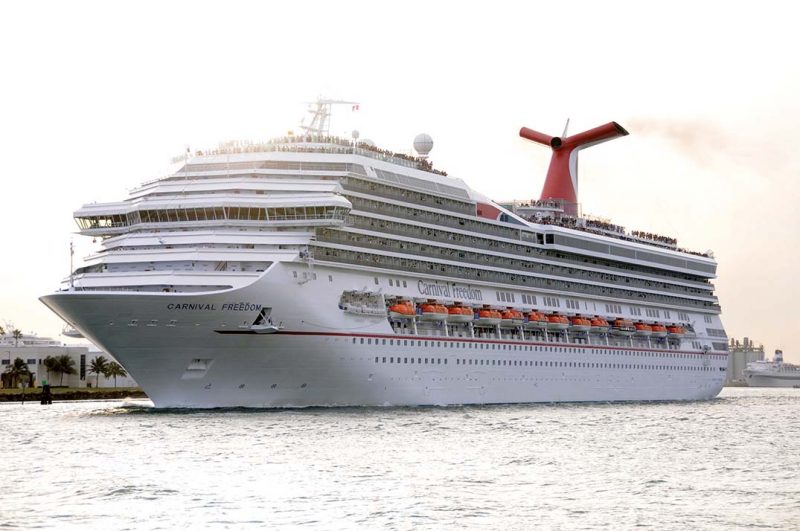 Carnival Cruise Line’s Galveston based Carnival Breeze, Carnival Freedom (above) and Carnival Valor were affected by Hurricane Harvey as was Royal Caribbean’s Liberty of the Seas. The ships were diverted to New Orleans until their home port had reopened. Passengers on all ships received a full refund and around a 25% credit toward a future cruise. Worse was yet to come however as category 5 storm Hurricane Irma rattled across the eastern Caribbean from 5th September with 185mph winds, the strongest such storm ever recorded. Initially Carnival Cruise Line’s itineraries on the Carnival Glory, Carnival Magic, Carnival Splendor and Carnival Pride were revised but then the other operators all followed suit. As the storm neared the Leeward Islands its intensity prompted the governors of Puerto Rico and Florida to declare a state of emergency. Disney Cruise Line revised the ports of call for the Disney Dream and Disney Fantasy whilst the Carnival Valor’s departure from Miami on 2nd September headed westward to name but one revised itinerary. The Allure of the Seas also headed to the western Caribbean with Royal Caribbean subsequently cancelling affected sailings operated by the Grandeur of the Seas, Vision of the Seas, Enchantment of the Seas, Majesty of the Seas, Adventure of the Seas, Anthem of the Seas, Empress of the Seas, Allure of the Seas and Harmony of the Seas.

Friday 8th September was dubbed “the day the cruise ships stopped” as Hurricane Irma was bearing down on Florida Cruise lines cancelled every voyage scheduled to depart from the state of Miami that day with many of the following day’s departures already cancelled. The Friday cancellations included the Enchantment of the Seas, Norwegian Sky, Disney Dream, Grand Celebration and the Majesty of the Seas. On the 9th September five of 1o sailings scheduled to begin in Florida on the Saturday were cancelled or delayed, including all departures scheduled for Disney Cruise Line, Royal Caribbean, MSC Cruises, Carnival Cruises and Norwegian Cruise Line. How quickly Florida’s cruise ports resumed business depended upon the post-storm condition of the ports, facilities and shipping channels. Needless to say, all affected cruise ships gave the storm as wide a berth as possible.

Ships returning early to Miami to beat the storm on 7th September generally encouraged guests who did not drive to Port Miami, and were unable to secure a flight back home, to remain aboard the ship for their own safety. The affected ships then put to sea and headed away from the storm’s path to ride it out. One such example was the MSC Divina, which arrived back at Miami on 7th September to beat the impending port closure and, as soon as the disembarkation was completed, she sailed to Cozumel (Mexico), beyond Irma’s reach, allowing those guests that wished to remain on board to continue their cruise. The ship remained alongside there until it was safe for her to return to Miami. Guests who disembarked on the Thursday received a refund for the two days shortening of their cruise holiday and, in addition, were also given a voucher for a 25% discount on the price of a future MSC Cruises holiday. Guests who continued the cruise after the call to Miami also received the same voucher. Due to the timing of Irma’s likely arrival to the South Florida coast, it was impossible to complete the turnaround operation scheduled for 9th September. For this reason, that cruise was cancelled. 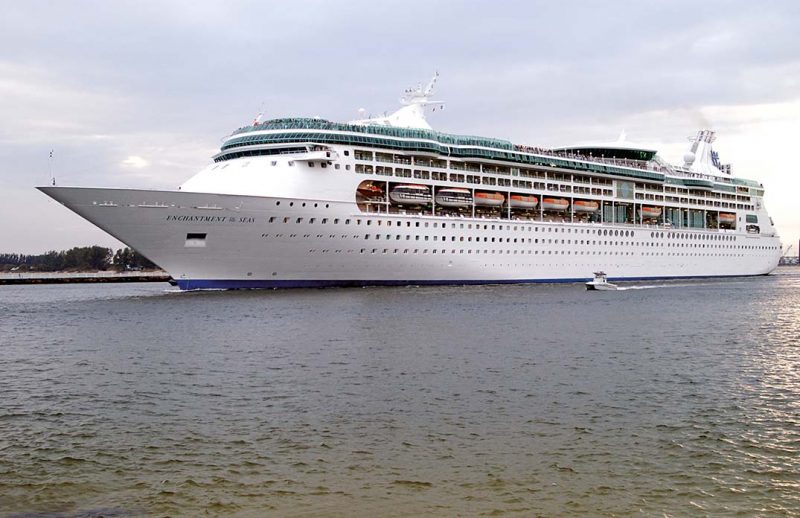 Royal Caribbean Cruises’ Enchantment of the Seas (above) took RCI employees out of Miami to safety on 7th September. The planned Bahamas cruise for that weekend had been cancelled so the company offered employees and their families the option of evacuating on the ship. The company’s Adventure of the Seas made a stop in St. Maarten on 1oth September to drop off supplies and embark 300 evacuees following Hurricane Irma. The company also announced it has committed to match donations up to $1million to aid Hurricane Irma relief efforts. The Majesty of the Seas made humanitarian calls in St. Thomas and St. Maarten to provide supplies and also assist in transporting evacuees in St. Maarten to safety. The 15th September cruise aboard the Majesty of the Seas was cancelled and the ship was instead utilised for rescue efforts in the Caribbean. The Empress of the Seas and Enchantment of the Seas were also on standby to assist Key West and Tampa at the time of writing. Carnival Cruise Line also joined the humanitarian efforts after Hurricane Irma with the Carnival Facination delivering supplies to St. Kitts. Carnival ships were also due to call at Grand Turk and other Caribbean Islands to assist with supplies on a longterm basis. Meanwhile, NCL sent the Norwegian Sky to St Thomas to help evacuees. In all the cancelled cruise count as a result of Hurricane Irma was a minimum of 19 sailings. The Carnival Elation’s scheduled near-month-long dry docking at the Grand Bahama Shipyard was aborted ahead of the storm’s arrival so that she could proceed to a safe area under tow.

Bahamas Paradise Cruise Line opened its ship for use as temporary accommodation at the Port of Palm Beach, whilst also offering free hot meals to first responders following Hurricane Irma. The ship remained in port, once Hurricane Irma had passed, until 16th September with the ship open to those individuals and families who had experienced hardship as a result of the hurricane. The cruise line charged a modest all-in fee of $39 per person per night for onboard accommodations and meals.