Former Jubilee To The Breakers 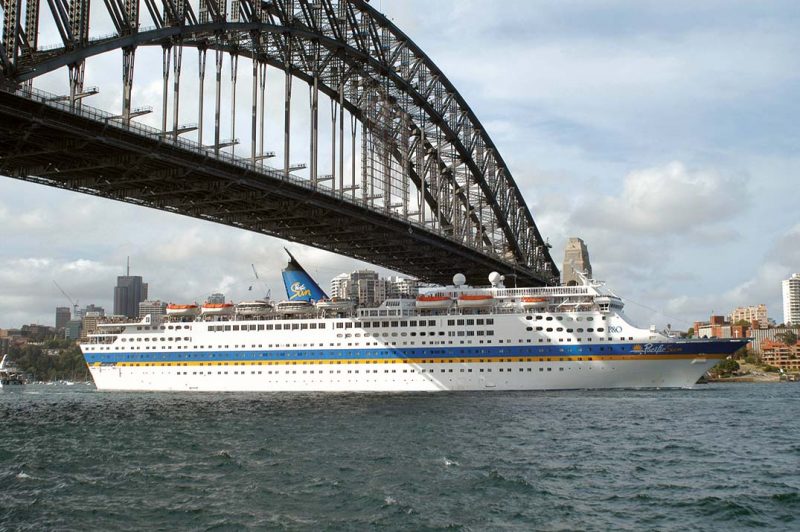 The Hen, previously the Henna/Pacific Sun passed through the Singapore Straits on 9th April bound for Bhavnagar in India and the scrap beaches. The once fine ship was delivered in 1986 by Kockums Varv, Malmö, Sweden, for Carnival Cruise Line as the Jubilee, along with near-sister ship Celebration. The other near-sister ship of the class, the Holiday, was built earlier by Aalborg Værft in Aalborg, Denmark. In 2004, the ship was transferred to P&O Cruises Australia and renamed Pacific Sun (above). The Pacific Sun arrived in Sydney, Australia, on 9th November 2004 and was the only one of the aforementioned trio of ships to lose her iconic funnel “wings” upon leaving Carnival Cruises. On 18th December 2011 P&O announced that the Pacific Sun would leave the fleet in July 2012 and on 13th September 2012 new owner HNA Cruises renamed the ship Henna. Her maiden voyage under Chinese ownership followed on 26th January 2013 from Sanya to Vietnam but in September 2013 the ship was detained at a port on the South Korean island of Jeju after Chinese shipping service company Jiangsu Shagang International applied for a seizure. The Henna’s owners ceased trading in November 2015, leaving the ship laid up and for sale for $35m. By 1st May the ship was beached for scrapping. The former Saga Ruby succumbed to the beaches on 12th April and the 40,171gt/1982 built Island Escape also looked set to follow having been renamed from Ocean Gala to Ocean Gala-1 and re-registered to St.Kitts and Nevis.

On 18th April Viking Ocean Cruises and Fincantieri signed a memorandum of agreement for the construction of two additional cruise ships, with an option for another two. The newbuilds will be sister ships to the six already ordered and will enter the Viking fleet in 2021 and 2022, respectively. The final contracts will become effective upon the fulfilment of financing and other customary closing conditions. The new ships will follow the same successful and award-winning design as the current 47,800gt/930 guest capacity ships, of which the Viking Star was the first, ordered and in operation. The Viking Star was delivered in Marghera in spring 2015, the Viking Sea and Viking Sky were delivered from Ancona, respectively, in early 2016 and early 2017 and the Viking Sun will arrive in late 2017, plus the fifth ship, Viking Spirit, in 2018. A sixth, yet-tobe- named ship will be delivered in 2019.