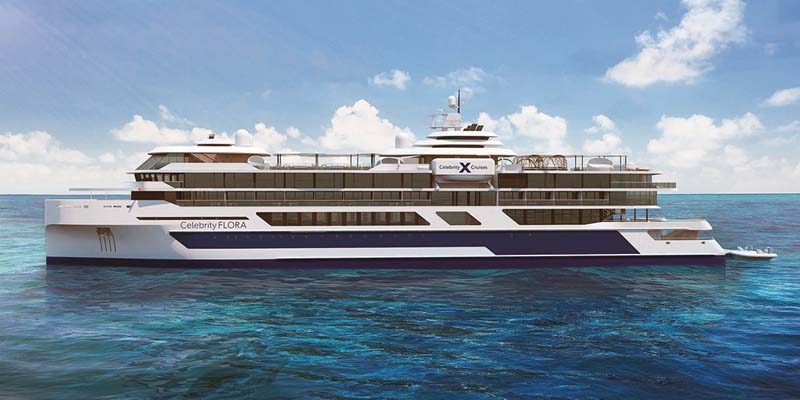 On 16th November Celebrity Cruises unveiled another ship design in the form of the Celebrity Flora (above) which has been meticulously designed to cruise the Galapagos Islands. The energy-efficient and 100-guest capacity ship will offer seamless sea-to-shore transportation and she also employs anchorless technology (Dynamic Positioning) that maintains the ship’s position while protecting the sensitive seabed. The innovative outward-facing design gives guests 360-degree views of the islands, while personal suite attendants, new dining venues, an open-air stargazing platform, and expert-lead ecological seminars make time aboard the ship a memorable experience. The Marina aboard the ship will be the primary point of access and can accommodate up to three Zodiacs at once, reducing transport time to and from land and allowing more time for guests to explore. Whilst aboard, guests can relax in the Sunset Lounge or in The Vista, an open-air hideaway with 360-degree views, cocoon-style loungers and private cabanas, plus enjoy the views in a floor-to-ceiling glass walled Observatory. Meals will be served in the Seaside Restaurant while The Ocean Grill will offer a casual dining space, panoramic views and Dinner Under the Stars. The Celebrity Flora’s two Penthouse Suites will be the largest among the Galapagos cruise vessels with separate indoor and outdoor living areas. Also on offer are Royal Suites, Ultimate Sky Suites with Infinite Veranda, Premium Sky Suites with Infinite Veranda and Sky Suites with Infinite Veranda. The Celebrity Flora will be equipped with an advanced propulsion system, hull configuration and specially designed diesel engines. Celebrity Cruises will also reduce the need for plastics on-board by introducing in-room water filtration stations and by converting sea water and air conditioning condensation into pure, fresh water. Any materials that can be recycled, reused or donated will be as part of a strict waste management system. The Celebrity Flora will sail from Baltra year-round offering two unique 7 night itineraries, undertaking her first sailing on 26th May 2019.

A Double For MSC 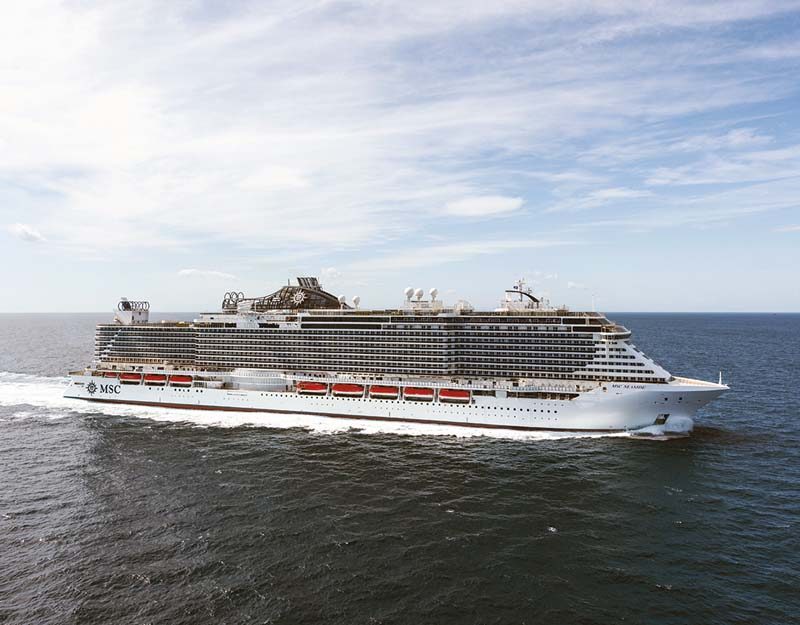 On 15th November MSC Cruises held a double ceremony at STX France as the company commemorated the coin ceremony for the MSC Bellissimi (delivery March 2019), and the steel cutting for the first Meraviglia-plus ship, to be named the MSC Grandiosa (delivery November 2019). The MSC Grandiosa will feature the very first fine art museum at sea, a Carousel Lounge (custom designed to host Cirque du Soleil at Sea) plus a host of innovations including hybrid power systems, state-of-the art waste management and emission-reducing energy and heat recovery systems.

On 29th November at the Fincantieri shipyard in Monfalcone, MSC Cruises officially took delivery of its new flagship, the 153,516gt, 323.30m long and 41m beam MSC Seaside (above). The delivery ceremony took place in the presence of Sergio Mattarella, President of the Italian Republic, Graziano Delrio, Italy’s Minister of Infrastructure and Transport as well as other authorities and dignitaries.

The event also saw MSC gain their second newbuild of 2017 plus the company also signed firm orders with Fincantieri for the construction of two Seaside EVO ships, a further evolution of the Seaside Class prototype, for a total investment of €1.8 billion. The MSC Seaview will follow her sister into the fleet in six months’ time. The newbuild agreement will see the slot reservation for the third Seaside Class ship, for delivery in 2021, succeeded by the first of two Seaside EVO ships. The second ship is set to come into service in 2023.

The 150,695gt/2016 built and 3,352 passenger capacity Genting Dream has moved to Singapore where she undertook her first round-trip cruise departure on 16th November. Her itinerary features 2,3 and 5 night cruises to Indonesia, Malaysia, Thailand and Myanmar. To promote Genting Dream to these markets, the Singapore Tourism Board (STB), Changi Airport Group (CAG) and Genting Cruise Lines have all signed a partnership worth $28 million. This partnership will continue till 2020, and is estimated to bring in 600,000 visitors and more than $250 million in tourism revenue. This is the first time that Singapore has served as the home port of a cruise ship of this size. Meanwhile the 150,695gt/2017 built sistership World Dream was named in Hong Kong on 17th November. Ahead of the naming, Dream Cruises launched a #TogetherWeBuildDreams campaign, which engaged cruise enthusiasts from around the world to build a large-scale replica of the World Dream, in an attempt to break the current world record of the largest LEGO ship held by DFDS Seaways. After two months, the giant ship model, collectively built by over 1,000 cruising guests, members of the public, as well as Andy Hung and Legend Creative, the first Lego Certified Professional in the Greater China region and his team, was officially unveiled at Kai Tak Cruise Terminal on 15th November. Prior to verification by the official Guinness World Records adjudicator, VIP guests completed the model by placing the final Lego blocks onto the ship. The 8.44m long replica of the World Dream contains over 2.5 million Lego blocks and was placed on public display at the cruise terminal. The real ship commenced her cruising schedule from Hong Kong on 17th November and from Guangzhou, Nansha, on 19th November on two weekly alternating 6-day/5-night itineraries to destinations including Boracay and Manila in the Philippines and Ho Chi Minh and Nha Trang in Vietnam, as well as 2-night weekend cruises from Hong Kong.