The 2M Alliance (Maersk Line & MSC) has announced that it will not be deploying any additional capacity into the market during an upgrade to the 2M Alliance network. The two carriers have revealed changes to services across the major trade lanes between Asia, Europe and North America, and include slot swaps with Hamburg Süd and Hyundai Merchant Marine. The new network comes into effect on 1st April when the new alliance structures come into place. HMM and Hamburg Süd will provide cargo, but will not operate vessels in the 2M network.

Vessel sizes, up to 13,000 TEU capacity, on the various routes are unlikely to change. New services will be introduced, branded by Maersk as AE7 in the Asianorthern Europe trade, and the TP16 on the Pacific. The AE7 loop will upgrade the line Asia to Europe services, reducing the transit time from Shanghai to Rotterdam and Hamburg by three days. On the Pacific, the TP16 will reduce transit times between Asia and the US east coast by eight days. In addition, Maersk Line will merge the TP8 and TP3 services between Asia and the US west coast into one service, the TP8. MSC will operate five services on the Asia-US west coast, five on the US east coast and six between Asia and Europe. 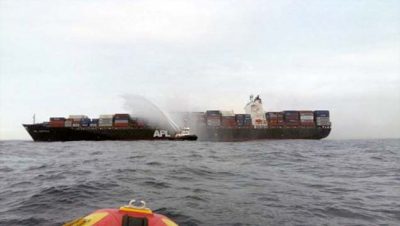 APL’s 71,867gt/2007 built APL Austria suffered a fire off the Eastern Cape on 12th February. Arrangements were made to take the vessel into the Port of Ngqura, where firefighters were on standby. The ship was 30 nautical miles south-west of Cape St Francis when the fire broke and was carrying several containers of hazardous cargo, none of which were affected. Once the ship was alongside in port efforts were made to remove some of the cargo on board to safety and the 21 crew members were evacuated. The fire itself took three days to extinguish. By the night of 14th February 281 containers had been removed from the ship. The source of the fire was in No.4 cargo hold so all containers on either side of the affected zone were unloaded to create working space and a fire-break on deck. The contents of burnt containers were also deposited into skips ashore.

COSCO (Guangdong) Shipyard secured a contract in early March to build three 1,750 TEU capacity containerships for a European buyer. Deliveries for the ships are scheduled for the fourth quarter of 2019, the first quarter of 2020 and the second quarter of 2020. Industry sources suggest that this trio are an option being exercised by Londonbased Lomar Shipping from an order originally placed in August 2016.

Diana Containerships Inc. has announced that, through a separate wholly-owned subsidiary, it has entered into a time charter contract with Hapag-Lloyd AG, Hamburg, for one of its PostPanamax container vessels, the 66,332gt/2004 built March, for a period of 9-14 months. The gross charter rate is $1 per day for the first 15 days of the charter period and $6,850 per day for the balance period of the time charter, in each case minus a 1.25% commission paid to third parties. The charter commenced on 23rd February. The March is a 5,576 TEU capacity container vessel. 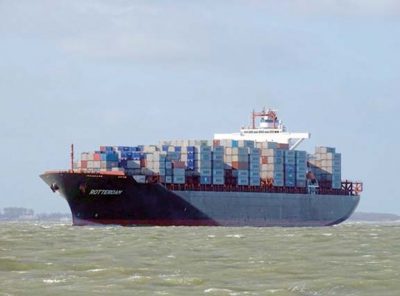 The Shipowner also entered into a contract with CMA CGM for the 71,786gt/2008 built and 6,494 TEU capacity PostPanamax container vessel, Rotterdam (above). The gross charter rate is $6,890 per day, minus a 3.5% commission paid to third parties, for a period of 8-11 months. The charter was expected to commence on 7th March. 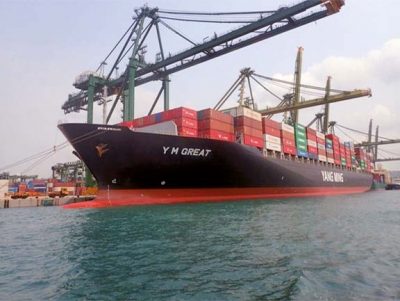 On 8th April another Diana owned ship, the 66,332gt/2004 built Great (above), commenced a charter with OOCL. The gross charter rate is $7,300 per day, minus a 3.75% commission paid to third parties, for a period of 9-12 month. This charter is anticipated to generate approximately $1.97 million of gross revenue for the minimum scheduled period of the time charter.