APL has been named the ‘Best Shipping Line in the Transpacific’ at the 2017 Asian Freight, Logistics and Supply Chain Awards, in Singapore. Determined through votes cast by industry stakeholders, customers, global shippers and readers of Asia Cargo News, the Award recognises APL as the preferred shipping carrier for the Transpacific market with outstanding leadership, service quality, innovation, customer relationship management and reliability in this segment category.

CMA CGM signed a binding deal with Danish counterpart Maersk Line in June to acquire Mercosul Line that operates in Brazil’s domestic container shipping market. The acquisition of Mercosul Line allows CMA CGM to strengthen its service offering to and from South America, most notably in Brazil, which was seen by the operator as a market with a strong potential for development. The transaction is subject to Brazilian regulatory approval and the closing of Maersk’s Hamburg Süd acquisition. At the earliest, the integration of Mercosul within CMA CGM will start at the same time as the Hamburg Süd integration, which is expected in the fourth quarter of 2017. Until then, Mercosul Line will continue business as usual. Launched in 1996 and acquired by Maersk Line in 2006, Mercosul Line has a fleet of four ships that operate in Brazil and South America. The company employs 92 land based staff and 160 seafarers and reported revenues of $128 million in 2016 and offers strong profitability.

CMA CGM has also purchased the 75,752gt/2010 built and 6,589-TEU Maule for $20.3 million. The ship was constructed by CSBC in Taiwan and previously operated for NYK Line in THE Alliance’s MD3 service between Asia and the Mediterranean. 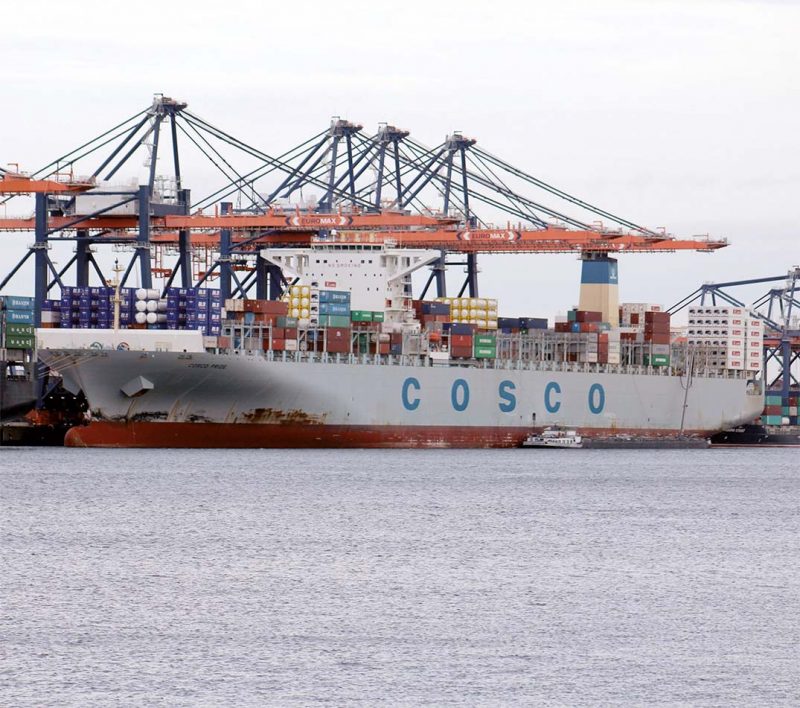 COSCO’s 141,823gt/2011 built COSCO Pride (above) departed from Felixstowe on the 27th June on a routine sailing to Southampton but suffered an engine failure en-route. She anchored clear of the shipping lanes off Eastbourne for around 36 hours before being towed to the Nab Anchorage off the Isle of Wight by the 484gt/2009 built Smit Tiger. After undergoing repairs, the ship sailed back to Felixstowe late on 3rd July, arriving the next morning before departing again that lunchtime bound for Piraeus. On 16th June Shanghai Waigaoqiao Shipbuilding (SWS) launched the largest containership ever built in China, the 148,386gt/2017 built and 20,000 TEU capacity COSCO Shipping containership Taurus. The ship is 400m long with a beam of 58.6m and is equipped for 1,000 TEU of refrigerated capacity. Stateowned Cosco Shipping ordered a total of eleven 20,000 TEU capacity containerships, of which three are being built by SWS, a subsidiary of China State Shipbuilding Corporation (CSSC). The ship is designed by Waigaoqiao Shipbuilding Company and China Shipbuilding Industry Corporation’s (CSIC) number 80 Research Institute. The previous largest Chinese-built containership was the 18,000 TEU CMA CGM Vasco de Gama delivered in 2015 by Shanghai Jiangnan Changxing Heavy Industry, an affiliate yard of SWS.

Hapag-Lloyd held the naming ceremony for the 118,945gt and 10,500 TEU capacity newbuild Guayaquil Express, the fourth of five newbuildings, at the Altenwerder container terminal in Hamburg on 16th June. Ordered in 2015, the Guayaquil Express will ply between Europe and South America. With a length of 333m and a beam of 48m, the ship is designed for the new locks of the Panama Canal. The ship will operate in the SWX service, calling at Hamburg, Antwerp, Le Havre, Caucedo, Cartagena, Manzanillo/PA, Buenaventura, Callao, Puerto Angamos and Valparaí­so. The Guayaquil Express, which was built by Hyundai Samho Heavy Industries in South Korea, and her four sisters are named after ports in South America. Homeported in Hamburg, the ships can carry a maximum of 19 rows of containers side by side on board, which each have a maximum capacity of 123,500 tonnes. The eight cargo holds and decks, offer a total capacity of 10,590 TEU. In July the container operator agreed to sell and lease back eight 8,000 TEU-9,000 TEU containerships to China’s Bocomm Financial Leasing for $320m. All vessels involved are between four and five years old and the deal is part of a $500m strategic agreement signed between the two companies in late June. The leaseback contracts mark the first time that Hamburg-based Hapag-Lloyd has ever borrowed from a Chinese lessor.