Anthony Weder’s latest newbuild, the 15,000gt, 164m long and 18,000m³ capacity Coral Energice, the first LNG carrier holding the Ice Class 1A Super, was named on 25th January by Aino-Maija Luukkonen, Mayor of Pori, Finland. The naming ceremony took place at the Port of Turku, Finland. The 18,000cbm LNG vessel had been delivered by Neptun Werft in Rostock, Germany. The ship is specially designed and constructed to operate in the Baltic Sea and is operationally managed by Skangas.

Erik Thun AB’s newbuild Ice Crystal (Yard No. 446) was launched at the Ferus Smit Shipyard in Westerbroek on 20th January. The Ice Crystal is the second ship in a series of two from a new design that was developed for Erik Thun AB of Lidkoping, Sweden. Both vessels are replacing the Snowstar and Ice Star. Ice Crystal is 15.6m longer than her sister Snow Crystal and both are classed as mini bulkers. Their design is dedicated to some specific trades in the Baltic region. The breadth of the ships is limited to 13.35m to allow them to fit into the locks of the Trollhattan Canal. However, her greater length will prohibit the Ice Crystal from using these locks. The ships are characterised by their extremely high deadweight of 5,680/6,550 tons and are propelled by a 1,950kW Wartsila main engine driving a nozzled CP propeller.

Grimaldi Group took delivery of the 62,134gt/2018 built Grande Halifax on 10th January at the Jinling Shipyard in Nanjing (China), a Pure Car & Truck Carrier and the last of a series of three sister units. The ship has a length of 199.90m, a width of 32.26m and a cruising speed of 19 knots. Italian-flagged, the vessel can carry 6,700 CEU (Car Equivalent Units) or alternatively 4,000 lanemetres of rolling freight and 2,500 CEU. The Grande Halifax is deployed on the Mediterranean-North America weekly service operated by the Group, joining her sister vessels Grande Baltimora and Grande New York.

HS Shipholding AB, part of Nordic Tankers Group, has finalised an agreement to sell Danish tanker operator Herning Shipping to ANE Shipping AS, a newly established Norwegian partnership between Camillo Eitzen & Co AS, Castel AS and Seahorse Maritime AS. Herning Shipping will now be renamed Christiania Shipping AS. Herning Shipping operates a fleet of 19 vessels, 12 of which are owned. The vessels range between 3,000-11,000dwt, operating primarily in Northern Europe and West Africa. The announcement followed on from the sale of Crystal Nordic to Essberger Tankers.

Schulte Group of Germany has acquired the LNG ship manager PRONAV. The Group owns in the region of 100 vessels (mainly container, tanker, bulk varieties) and manages 600 vessels in all segments. PRONAV, based in Hamburg, is an internationally renowned ship manager specialising in large LNG tonnage. 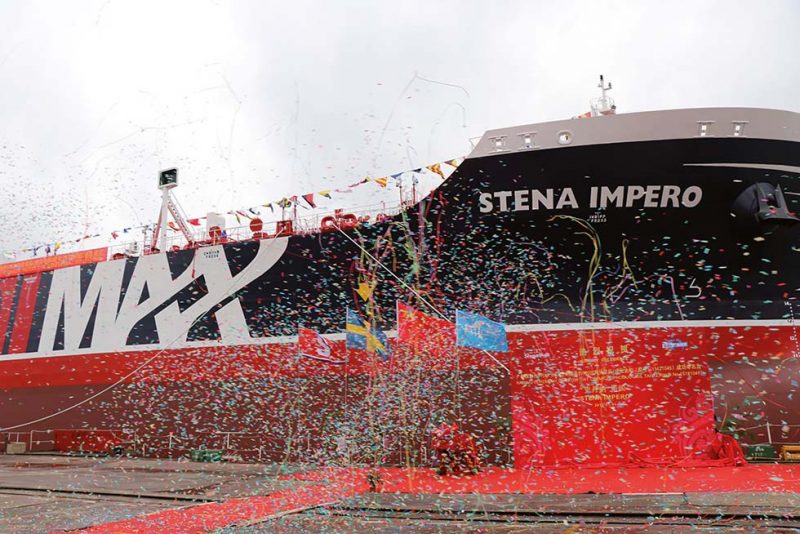 Stena Bulk’s Stena Immortal was named digitally on 17th January at Stena’s new office in Hellerup in the north of Copenhagen. Some 200 guests gathered to attend the naming ceremony and watch godmother Jane Olsson Thorburn digitally swing the bottle of champagne against the Stena Immortal’s bows. On 31st January sister chemical and product tanker Stena Impero was named in Guangzhou (above). She is the last in the series of 13 sister ships ordered by Stena Bulk at the GSI shipyard in 2012 and represents an investment of SEK 4 billion. 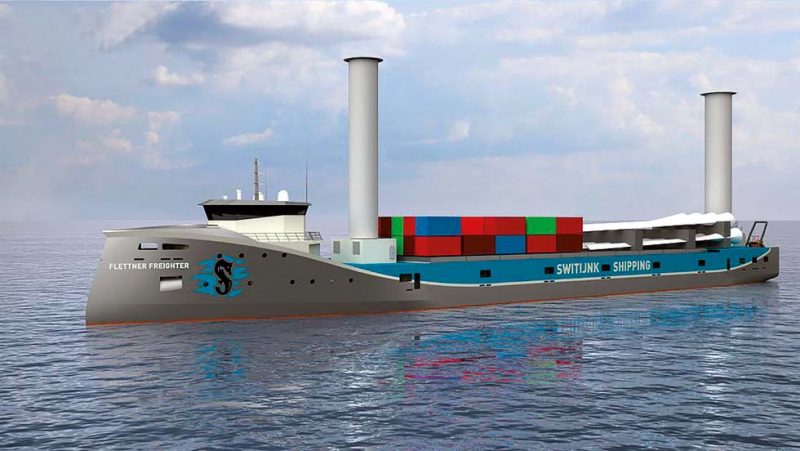 Switijnk Shipping has engaged C-Job Naval Architects to deliver a concept design for a wind-assisted general cargo vessel, otherwise known as a Flettner Freighter (above), which is expected to achieve fuel savings of approximately 14%. The 8,500dwt vessel will be equipped with two Norsepower Rotor Sails that will supplement the main engines, representing a hybrid solution. Rotor Sails are the most viable choice compared to other wind assisted propulsion systems and two larger Rotor Sails are the most effective for this project. This is because these will yield a comparable propulsive force to four smaller units. Also, with two Rotor Sails, one on the bow and one on the stern, there would be no chance of wind shadows affecting performance. Rotor Sails are deck-mounted rotating cylinders that utilise the Magnus effect to create a propulsive thrust. The Magnus effect is a force that acts on a spinning body in a moving airstream. Because the Magnus effect acts perpendicularly to the direction of the airstream, the optimum wind direction for Flettner ships is at 90 degrees to the direction of the sailing. The Flettner Freighter design also has space reserved for LNG engines, although their use will be dependent on LNG bunkering infrastructure along the sailing routes of such a vessel. Switijnk Shipping wishes to use the FF8500 Flettner Freighter concept to work towards the sustainable future of freight shipping by leading the field on the subject of wind assisted propulsion.

TORM of Denmark has named its 65,000gt LR2 product tanker newbuilding TORM Hermia, the second of four LR2 newbuilds ordered by TORM from GSI. The first vessel was christened TORM Herdis with two sisterships to follow. The naming ceremony for the 250m long, 44m wide and 114,000m3 vessel took place at the GSI Nansha Shipyard in China on 6th February.

Wisdom Marine Lines of Taiwan has taken delivery of two eco-ship newbuilds. The 35,308gt/61,950dwt Amis Miracle joined the company’s fleet on 12th January. Built at Oshima shipyard, the Ultramax bulker is 200m long with a beam of 32.3m. The 180m long, 29.8m beam and 23,239gt/37,600dwt Bunun Kalon was also delivered from the Imabari Shipyard on 15th January. The latest additions bring the company’s fleet to 126 vessels.