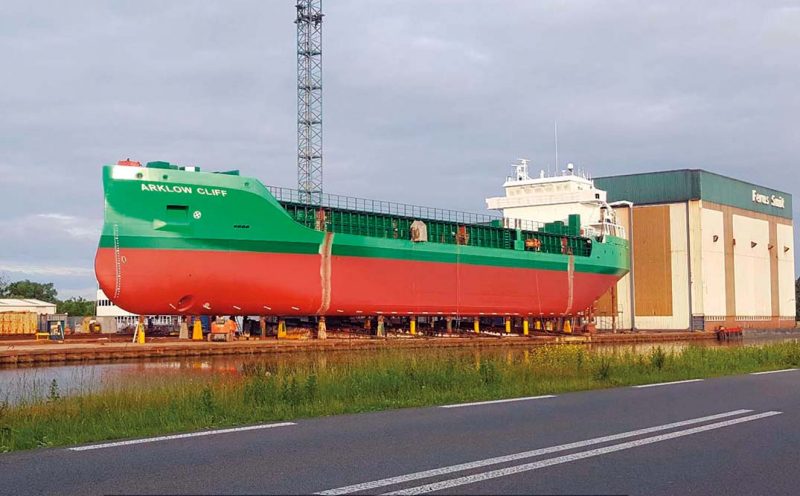 Arklow Shiping’s newbuild Arklow Cliff (above), Yard No. 428, was launched on 30th June at the Ferus Smit shipyard in Westerbroek , The Netherlands. The launching was completed without ceremony as the christening will take place at a later date. The Arkow Cliff is the fifth in a series of 10 ships to be built of a new design for Arklow Shipping. With a maximised hold volume of 220.000 cubic feet and a carrying capacity over 5,000dwt, this class of vessel still falls under the 3,000gt limit. The ship has one single hold and a 1A ice class notation. Propulsion is provided by a 1740 kW MaK engine with a single ducted propeller. Delivery was scheduled for July 2017.

COSCO Shipping Energy Transportation (CSET), the oil and gas shipping sector of China Cosco Shipping Group, has banked $543.9m in loans from China Exim Bank for 10 tanker newbuildings. The transactions, which were completed via 10 single-ship owning companies, will be used to ensure the delivery of seven VLCCs and three LR1 tankers that are on CSET’s orderbook. The financial transaction is part of a larger deal that Cexim signed with Cosco Shipping in May, in which the policy bank agreed to offer $4.2bn in pre-delivery loans to the state-owned conglomerate for 59 newbuildings ordered after the second half of 2014. CSET has nine VLCCs on order, of which seven were contracted in 2015 and scheduled for delivery between July 2017 and September 2018. It also has five long range one tankers on order, with delivery expected between November 2017 and December 2018.

Eagle Bulk Shipping has taken delivery of the 35,812gt Groton Eagle, the sixth of nine Crown-63 Ultramax dry bulk sister vessels that it purchased from Greenship Bulk Trust in March 2017. With the addition of the 63,500 dwt ship, previously named JS Narmada, Eagle Bulk’s fleet increased to 46 vessels on the water. The bulk carrier was constructed in 2013 by China’s shipbuilder Dayang Shipbuilding. Following the delivery of the remaining eight Ultramaxes, which are scheduled to join Eagle Bulk Shipping’s fleet over the coming months, the company’s pro-forma owned-fleet will consist of 49 Supramaxes and Ultramaxes. Eagle Bulk purchased the ships, which will be renamed after Connecticut coastal towns, for a total of $153 million.