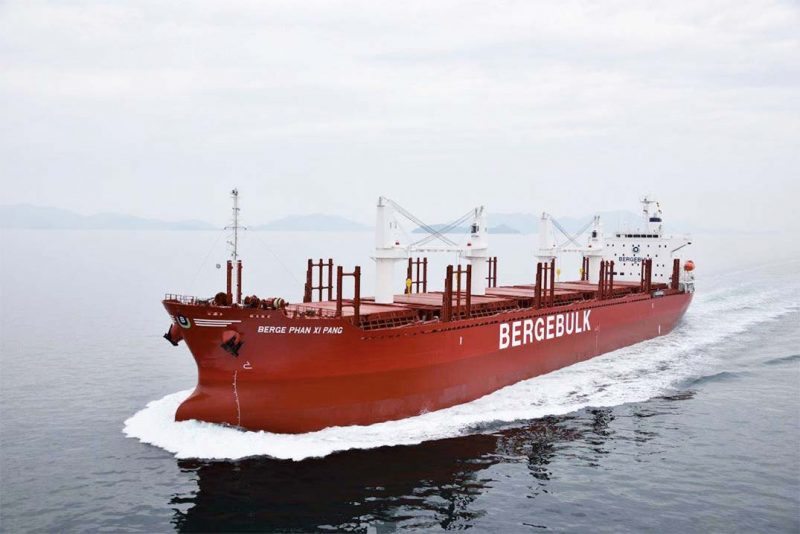 Berge Bulk has welcomed the Berge Phan Xi Pang (above) to its fleet Berge Bulk after delivery by the Imabari Group’s Imabari Shipyard. She was delivered on 30th May 2017 and is sailing under the Isle of Man flag. The maiden voyage involved carrying steel pipes from Kimitsu, Japan for discharge in Batam, Indonesia.

COSCO (Dalian) Shipyard delivered the 44,027gt bulk carrier Flag Lama to a European buyer in May. The bulk carrier measures 229m in length with a 32.26m beam and a 20.05m hull depth.

Eagle Bulk took delivery of the 35,812gt/2012 built Stonington Eagle in May, the third of 9 Crown-63 Ultramax dry bulk sister vessels the company has acquired from Greenship Bulk Trust. With the addition of this 200m long ship, the current Eagle Bulk fleet consists of 43 vessels on the water, including 5 Ultramax vessels, with another 6 Ultramaxes set to be delivered over the coming months. Eagle Bulk owns one of the largest fleets of Supramax/Ultramax dry bulk vessels in the world. Supramax/Ultramax vessels, ranging in size from approximately 50,000 to 65,000 dwt. 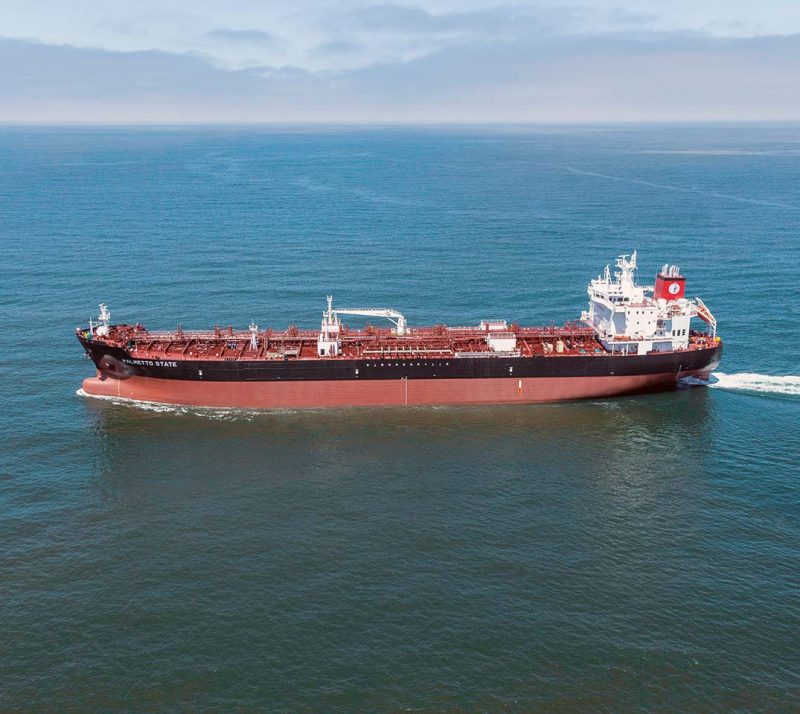 General Dynamics NASSCO delivered the final of eight ECO Class Tankers on 7th June. The 29,923gt/2017 built Palmetto State (above) was handed over to American Petroleum Tankers (APT) during a signing ceremony at the NASSCO shipyard in San Diego. In 2013, NASSCO entered into agreements with two companies, APT and SEA-Vista, LLC, to design and construct a total of eight such vessels. The LNG-conversion-ready product tankers are the most environmentally friendly tankers to enter the Jones Act trade.

Golden Ocean Group Limited of Norway has taken delivery of another second-hand bulker bought in March 2017 within a 16-vessel contract. The ship in question is the 106,368gt Q Gayle, a Capesize ore carrier which will be renamed Golden Gayle. The 206,600dwt ship was built at the Japanese Universal shipyard in 2011. Of the 16 vessels acquired, 14 bulkers including Q Gayle were bought from subsidiaries of Quintana Shipping, while two ice class Panamax vessels were purchased from subsidiaries of Seatankers, an affiliate of Hemen Holding, the company’s largest shareholder.

Navig8 Chemical Tankers took delivery of the Navig8 Spica, a 25,000dwt stainless steel chemical tanker, from Fukuoka Shipbuilding in Japan towards the end of May. The 15,600gt/2017 built Navig8 Spica is the first of two vessels contracted at Fukuoka to be delivered to the company and is the first of two vessels to be delivered under the sale and leaseback arrangements entered into with subsidiaries of SBI Holdings Inc. (SBI) earlier in May. Navig8 Product Tankers took delivery of the Navig8 Gratitude, a 113,000 DWT LR2 tanker from China’s Guangzhou Shipyard International Company Limited (GSI) in the second half of May. The 63,965gt Navig8 Gratitude is the last of eight vessels contracted at GSI, formerly CSSC Offshore & Marine Engineering (Group) Company Limited, to be delivered to the company. 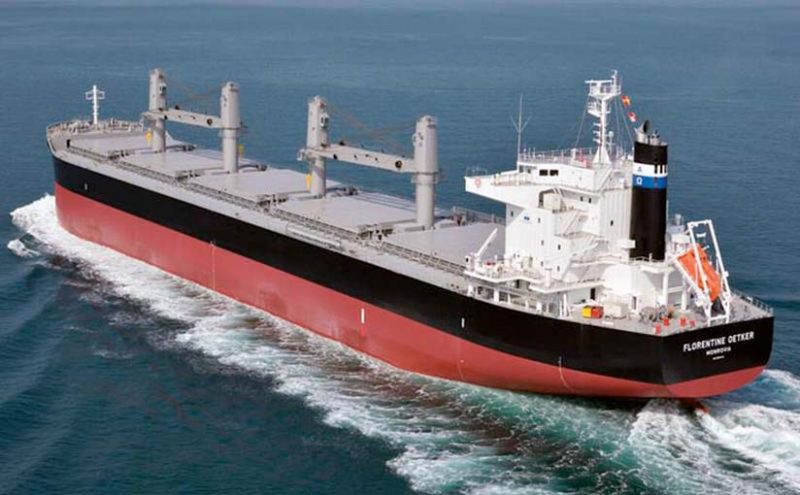 Oetker, one of the most respected names in the maritime world, is to retain an industry presence despite the imminent $4bn sale of the German family’s Hamburg Süd group to Maersk. Although the Danish line is to keep the brand, the Dr. August Oetker group is withdrawing from the shipping industry. However, a new generation is now starting to make its mark, with Alexander Oetker’s AO Shipping (estd. 2003) taking delivery of a newbuilding Ultramax from the Imabari Shipyard in Japan and, in so doing, ensuring that the Oetker name lives on in shipping. The 63,000dwt bulker has been named Florentine Oetker (above), the first ship to retain the family name since the 1950s, when the late Rudolf Oetker, grandfather of Alexander, started to build up Hamburg Süd. The naming ceremony was attended by members of the Oetker family including advisory board chairman August Oetker, father of Alexander who is the founder and managing director of AO Shipping.

Scorpio Tankers and Navig8 Product Tankers have signed merger agreements to create the world’s largest product tanker player. As part of the agreements, Scorpio Tankers will first acquire four Long Range One (LR1) vessels from Navig8 for $42.2m. These funds will then act as bridge financing to form part of the balance sheet of the combined company. For the remaining 23 vessels of the Navig8 fleet, Scorpio Tankers will issue 55m shares to Navig8 shareholders with the latter indicating a total equity value for Navig8 of $228.8m and an enterprise value of $1.1bn, including debts. On a fully delivered basis, the combined fleet will consist of 105 owned or finance leased product tankers, including 38 LR2s, 12 LR1s, 41 medium range and 14 handymax ships plus 19 time or bareboat chartered-in vessels. In addition, Scorpio Tankers has an orderbook of six MR vessels.

Skangas’ 5,921gt/2017 built LNG bunker/distribution vessel Coralius, the first European-built vessel of her type, was named on 22nd May. The ship was commissioned by owners Anthony Veder and Sirius Shipping in 2015 and was built by Royal Bodewes. The Coralius will offer LNG bunkering services for Skangas, a subsidiary of Gasum, mainly operating in the North Sea, the Skagerak area and the Baltic Sea.

Sovcomflot (SCF) Group’s first ice-class LNG carrier designed to serve the Yamal LNG project in the country’s Far North, the 128,806gt/2016 built Christophe de Margerie, was named in Port Bronka, St. Petersburg, on 3rd June. The ship is named after the former CEO of Total, and guests of honour at the naming included his widow Bernadette de Margerie, and his brother Jean-Marc de Margerie. The 172,000m3 vessel is ice-class Arc 7 and the first in a series of 15 such LNG carriers.

Includes news for Eagle Bulk, Navig8 and others