American Petroleum Tankers (APT), a subsidiary of Kinder Morgan, Inc., took delivery on 30th November of the 50,000dwt product tanker American Endurance, the first of four next generation ships. This delivery was the 25th vessel built by the Philly Shipyard (formerly known as Aker Philadelphia Shipyard, Inc.). The tanker is based on a proven Hyundai Mipo Dockyards (HMD) design that also incorporates fuel efficiency features including flexible cargo capability. The vessel has already received LNG Ready Level 1 approval from the American Bureau of Shipping (ABS). The shipyard is constructing another three 50,000 dwt tankers for APT and two 3,600 TEU containerships for Matson Navigation Company, Inc. 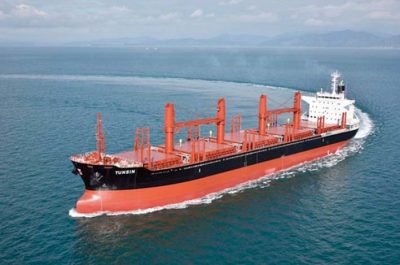 China Navigation Company (CNCo), a deep sea shipping arm of the Swire Group, christened the Tunsin (above), the last of four Handysize bulk carrier newbuildings at Imabari Shipyard in Japan on 16th November 2016. The Tunsin is part of the four-vessel order placed in June 2014. The deliveries of the first three Imabari38 vessels, Taiyuan, Tientsin and Tsingtao, took place between July and October 2016. The company said that the christening of the Tunsin marked the completion of CNCo’s newbuilding program of 41 vessels which include 12 multipurpose vessels, 28 handysize bulk carriers and an 8,745gt cement carrier. The latter was named Aotearoa Chief in New Zealand on 15th October.

CNCo, Mitsui OSK Lines and Scorpio Bulkers amongst others