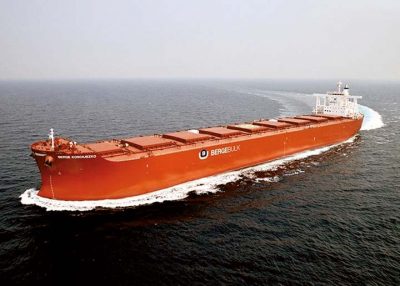 Berge Bulk took ownership of the 92,732gt/2014 built Berge Kosciuszko on 22nd February 2017. The vessel was originally time chartered for a period of 10 years with options to purchase commencing from the end of the third charter year. She was managed by Shoei Kisen Kaisha and sailed on one of Berge Bulk’s contracts for Rio Tinto. Berge Bulk then made the decision to purchase the vessel. With a capacity of 181,394dwt, the Berge Kosciuszko is capable of carrying enough iron ore to construct three Sydney Harbour Bridges. She is named after Mount Kosciuszko, located in the snowy mountains of Kosciuszko National Park in New South Wales, Australia. At a height of 2,228m above sea level, Mount Kosciusko is regarded as the highest mountain in mainland Australia.

Berge Bulk has since added two Capesize newbuildings to its fleet, namely the 93,500gt Berge Sarstein and the 133,500gt Berge Cho Oyu. The 182,000dwt and 292m long Berge Sarstein was delivered on 1st March and undertook her maiden voyage to Newcastle, Australia, from where she transported coal to Map Ta Phut in Thailand. The 262,000dwt and 327m long Berge Cho Oyu was also handed over to Berge Bulk on the same day, the third in a series of four very large ore carriers (VLOCs) built at GSI Long Xue Shipyard in Guangzhou, China.

Concordia Maritime has signed a third sale & leaseback agreement, this time for the 29,666gt/2015 built IMOIIMAX tanker Stena Important. The ship has been sold to a large Japanese financial institution and delivery took place in March. Under the agreement, the vessel will be chartered back on a bareboat basis (i.e., without crew) for 9 years, with a purchase obligation in year 9. The sale price of $36 million and the transaction’s other conditions bring both strategic and financial values.

Golden Ocean Group Limited of Norway reached an agreement with shipyards in March to defer the delivery of its six vessels currently under construction from the first quarter of 2017 to the same period of 2018. This brings the total number of deferrals to ten newbuildings, as the company achieved aggregate price reductions of $15.3 million. These agreements are subject to final acceptance from the yard’s refund banks. Golden Ocean also reported that it had returned to profit during the 4th quarter of 2016 as its net income for the period stood at $6.5 million, compared to a net loss of $69.2 million seen in the same 3 months in 2015.

Mitsui Engineering & Shipbuilding Co., Ltd. (MES) delivered the Neo60BC bulk carrier Indigo Breeze on 22nd February. The 60,000dwt ship was built at MES’s Tamano Works for Arist Maritime S.A. of Panama. The 34,578gt, 199.99m long and 32.25m beam ship is the 22nd ship of the Neo60BC Eco-Ship class. The Indigo Breeze is powered by a Mitsui-MAN B&W diesel engine with a service speed of 14.5 knots. She has four cranes, five cargo holds and is designed for loading various cargoes such as coal, ore, grain, as well as project cargo such as steel pipe and hot coil. The new bow and stern form makes it possible to maintain good performance in rough sea conditions as well as calm and provides enhanced manoeuvrability.

Toisa, a Greek controlled ship owner, which filed for Chapter 11 Bankruptcy protection in the U.S.A at the end of January, managed to regain control of an arrested ship, the 62,571gt/2010 built United Journey via a negotiated court order with Citibank, which seized the tanker in the Caribbean on 24th December 2016 and detained her at St. Eustatius. At the time of this agreement, all 46 of Toisa’s vessels remained free to undertake all business already contracted, and were available to enter into further deployments.

UECC has announced the launching of a new Atlantic service between Scandinavia and the North of Spain. This service is the quickest way to Scandinavia, connecting Vigo (Spain) with a direct service into Drammen (Norway) and Wallhamn (Sweden). The new service deploys three Breeze class vessels and there are two loops as follows:

Wagenborg’s new EasyMax vessel, build number 850, was launched in February at the Royal Niestern Sander shipyard. This ice-strengthened multipurpose vessel, commissioned by Wagenborg and affiliated partners, with a cargo capacity of over 14,000 tonnes, measuring 149m in length and 15,90 in beam, is the largest vessel ever built at a yard situated on the landside of the dikes in the North of the Netherlands. The vessel will be delivered by the yard in April 2017.

News from around the world including Toisa, UECC and others