AVIC International Leasing and SDTR Marine have signed an agreement for the construction of ten 85,000dwt bulk carriers with Dalian Shipbuilding of China. Under the deal, signed on 15th January, the Kamsarmaxes are scheduled to commence deliveries in 2021.

The China Navigation Company (CNCo) is to acquire the bulk shipping activities of Hamburg Süd, which includes Rudolf A. Oetker (RAO), Furness Withy Chartering and the bulk activities in Alianca Navegacão (Aliabulk). Hamburg Süd’s bulk business operates from Hamburg, London, Melbourne and Rio de Janeiro with a chartered fleet of approximately 45 vessels in the segments: Handysize, Supra/Ultramax and Kamsarmax/Panamax. However, the company’s liner shipping activities, involving transporting cargo in containers, will continue. CNCo, headquartered in Singapore, is the wholly owned deep-sea ship owning and operating division of the multinational Swire Group. The company today employs around 2,500 employees globally and owns and operates about 135 vessels consisting mainly of dry bulk carriers and multipurpose liner vessels. Swire Bulk, its dry bulk trading business, was established in 2012 and trades a modern fuel-efficient fleet of over 100 Handysize and Supra/Ultramax vessels comprised of owned and long term/short term-chartered tonnage. Closing of the agreement is expected by the end of the first quarter of 2019, subject to regulatory approval.

Glovis Europe, Hyundai Glovis’ German subsidiary, and Stena Rederi, part of the Stena AB, have filed an application with the EU seeking approval to form a joint venture. The two companies wish to create a new joint venture company to operate short sea services for pure car and truck carriers in Europe. Hyundai Glovis is based in Seoul, South Korea and is part of the Hyundai Kia Automotive Group. The company operates a fleet of 34 car carriers.

Maersk Tankers held a naming ceremony for its latest newbuilding on 11th January, the MR tanker, the 29,816gt/2019 built Maersk Cebu (Yard No. SHA-119), at a Samsung yard in Ningbo, China. The 50,000dwt ship is the 15th of nineteen vessels in the company’s ongoing fleet renewal programme.

Mitsui O.S.K. Lines Ltd. has announced the naming of a newbuilding LNG Carrier ordered by a MOL/JERA Co., Inc. joint venture called Trans Pacific Shipping 5 Ltd. The ceremony was held at the Nagasaki Shipyard & Machinery Works of Mitsubishi Heavy Industries, Ltd. in mid-January. The 151,500gt/2019 built newbuild will serve JERA and was christened Nohshu Maru, the second vessel for MOL to feature the MHI-developed Sayaringo cargo tank. The vessel will transport LNG that JERA purchases from the Freeport LNG Project in the USA and from other suppliers.

Oldendorff has sold its three remaining self-discharging vessels operating in the CSL Pool, namely the 41,428gt/2000 built Sophie Oldendorff, 42,033gt/2005 built Harmen Oldendorff, and 28,747gt/2000 built Alice Oldendorff to Algoma which is also a partner in the pool. Algoma has paid $100.5m for the trio, which will be delivered by mid-2019. Following the sale Algoma will have eight vessels operating in the CSL Pool and CSL will have 10, with Oldendorff effectively exiting the same pool. After the sale, Oldendorff will have 10 self-unloaders in its fleet plus two newbuilds destined for a 25-year contract for NSPC2 in Vietnam. Oldendorff took delivery of a new bulk carrier built by Samjin Shipbuilding Industries in late January, with a second expected in April 2019.

The 22,918gt/2019 built and 36,000dwt Christine Oldendorff, charter name Midland Trader, was built at Weihai in Shandong, China, where sister Christopher Oldendorff (to be known as the Hansa Baltica). Both vessels were ordered in June 2012 but financial difficulties caused delays and Oldendorff cancelled the contract in 2015. The yard was later saved by the Shanghai Zhouji Group and Oldendorff bought the ships once again from the new entity as resales. The two eco handy-size ships are of the Korean FESDEC eco design and are equipped with four 35 tonne Masada cranes as well as a Wärtsilä 5RT-flex 50-D main engine, a 25t/m2 tank-top strength, Erma First ballast water treatment system plus an energy-saving Mewis duct in the hull form. On 5th February came the news that Oldendorff Carriers had also taken delivery of a further four eco-newbuildings in the form of the 61,400dwt Ultramaxes, the Jan Oldendorff, John Oldendorff and Julius Oldendorff, which were delivered by Nantong Cosco KHI Engineering, plus the 81,242dwt, Kamsarmax vessel Kai Oldendorff, which was also delivered by Hantong Shipyard and will be retrofitted with an exhaust scrubber in 2020.

Pacific Basin of Hong Kong held a naming and delivery ceremony for the 23,232gt/2019 built Iwagi Island, the latest Handysize bulker to join the company’s fleet in mid-January. Constructed at Imabari Shipyard in Japan, the 180m long/29.8m beam and 37,600dwt vessel was ordered by the company back in 2015. The 47,000cbm capacity ship was christened by Nadine Knight, the godmother of the ship.

SailCargo’s newbuild Ceiba had her keel laying ceremony on 8th January 2019. The next goal is to begin framing the Ceiba as soon as possible. The entire project is being funded as it happens, which is only possible thanks to investors buying shares of stock in the company, Sailcargo Inc. These shares are offered from $1,000 and around 23% had been sold as 2019 began. 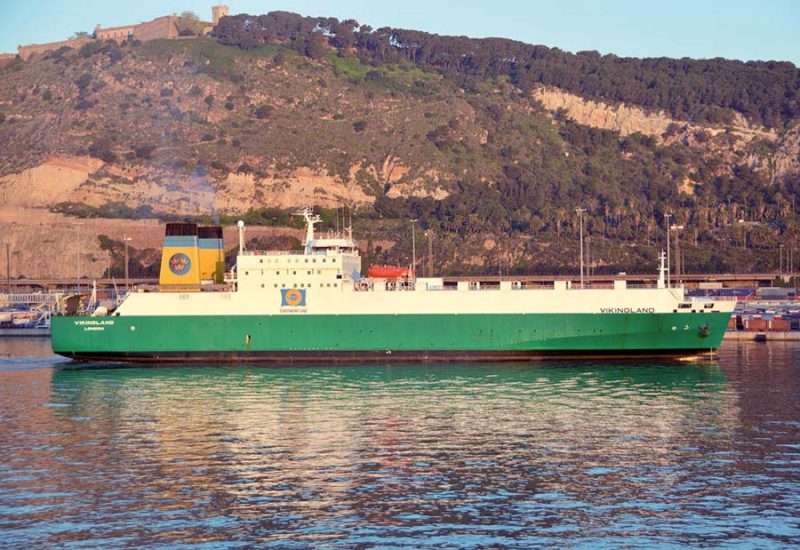 Salamis Lines of Cyprus has signed an agreement to acquire a 20,831gt Ro-Ro vessel in April 2019. Local reports suggest that the vessel in question is the 1982 built Vikingland (above), previously known as the Aurora. The new acquisition will join the company’s two existing ships, the Ro-Ro 21,195gt Alexo and the containership Alasa. The Alexo operates between Lavrio, Limassol and Haifa.

Spliethoff Group of Amsterdam has expanded its fleet with five multipurpose (MPP) tweendeck vessels. The quintet of 2008-2011 built ships were taken over from German-based Hansa Heavy Lift.

The vessels are the 9,627gt/2008 built and 12,750dwt HHL Elbe, the 9,627gt/2009 built HHL Tyne, 9,611gt/2009 built HHL Amur and the 9,611gt/2009 built HHL Mississippi. Their respective new names will be Hudsongracht, Humbergracht, Heerengracht, Houtmangracht and Prinsengracht. The Spliethoff Group, which comprises Spliethoff, BigLift Shipping, Transfennica, Sevenstar Yacht Transport, Wijnne & Barends and Bore, currently has a fleet of 103 vessels. Hansa Heavy Lift’s vessel disposals follow on from the company filing for insolvency at the Hamburg District Court in December 2018.