American Cruise Lines’ newbuild American Constitution successfully passed her set of sea trials in the first half of April in Chesapeake Bay. The 175 passenger capacity vessel’s maiden cruise departed from Baltimore on 18th April, a new 10 night cruise around Chesapeake Bay. For the remainder of 2018, the new ship will stay on the East Coast, where she will run a series of trips in the summer and autumn from Boston and New York. 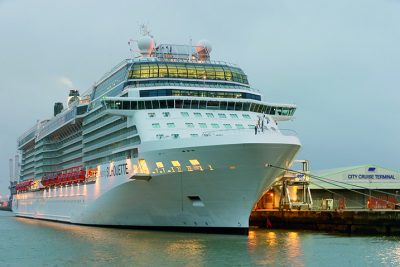 Celebrity Cruises’ 122,210gt/2011 built Celebrity Silhouette arrived at Southampton on 28th April to begin her first season at the port (above). The 2,886 guest cruise ship replaces the popular 121,878gt/2010 built Celebrity Eclipse which sailed from Southampton for eight summers since her launch in 2010 and has moved to Dublin for summer 2018. Following a two-night sailing to Le Havre the Celebrity Silhouette offered 8-14 night holidays to the Canary Islands, Spain, Italy, the Norwegian Fjords and Iceland.

CMV’s 16,144gt/1948 built Astoria made her maiden call to the Highlands (Fort William) on 25th April as she embarked on a 14-night cruise itinerary visiting the Scottish lochs and islands before heading to Ireland. The occasion was marked with an exchange of plaques between Cruise & Maritime Voyages, and local councillors. The Astoria also visited the Orkney Islands, Stornoway, Belfast, Dublin and the Holy Loch before returning to Tilbury on 5th May.

Fred. Olsen Cruise Lines commenced its 2018/19 cruise season from the ports of Newcastle and Liverpool on 26th April. The 1,350 guest flagship Balmoral departed Newcastle on a seven-night ‘German Cities & the Kiel Canal’ cruise whilst the 28,613gt/1972 built and 804 guest Black Watch departed from Liverpool on an eight-night ‘Fjords, Mountains & Glaciers’ itinerary around Norway.

The 43,537gt/1988 built Balmoral has a record 15 voyages from the Port of Tyne, Newcastle in 2018, an increase on the 13 departures offered in 2017. The Black Watch will be offering a record 18 departures from Liverpool between April and November 2018.