Winter in the North Atlantic

The Crystal Sapphire and the Loadline

Back in the 1860s there were numerous losses of British ships due to overloading and so the MP, Samuel Plimsoll, took up the cudgels on behalf of the British seafarer and managed with some difficulty to get a legal requirement for ships to be provided with a loadline which was included in the Merchant Shipping Act of 1894. Yes, the first time that a loadline was required was when this law was enacted, and this was the law which controlled the activities of ship-owners. The loadline is a white or yellow disc required to be 12 inches in diameter, with an 18 inch horizontal line through the centre, and this line indicates the level to which it is lawful to load the ship.

Of course it was not possible just to have a single line. This would be the level at which the ship would float when fully loaded in salt water in summer. And it was quickly perceived that ships would be loaded in ports, some of them in rivers, and harbours where the water would be fresh and therefore less dense than seawater, and so maybe the ships could be loaded to a deeper point than the summer seawater loadline, and so a second line was drawn labelled F, and then if the ship was to sail in, or start off in the tropics there would be a certain amount of time when it could very reasonably be at a deeper draught and so on. And then there was the possibility of the ship sailing into temperate latitudes in winter and so an additional and lower line was added, designated W, and lowest of all if a ship was due to sail out into the North Atlantic in winter it could only be loaded to WNA.

The mates of bulk carriers in particular became used to juggling the loadline requirements, typically if they started out at a tropical port in winter and the port was in a river, there was a lot they could do, and so they would have the Third Mate take a water density reading and then calculate the number of days they were going to be at sea before leaving the tropical zone and hence what the fuel and water consumption was going to be, so that when they entered the new zone the ship would be at the right draught. On occasions they would consult with the captain and the company and would decide whether fuelling, known in the business as taking bunkers, might be carried out during the voyage, therefore allowing more cargo to be carried. I was once on a ship which was loaded with grain in Duluth at the head of Lake Superior, and took on fuel at Seven Islands in the St. Lawrence, the Cape Verde islands in the Atlantic and Durban in South Africa before it reached its destination which was Beira, then in Portuguese East Africa. This all in the interests of carrying a couple of hundred tons of extra grain. 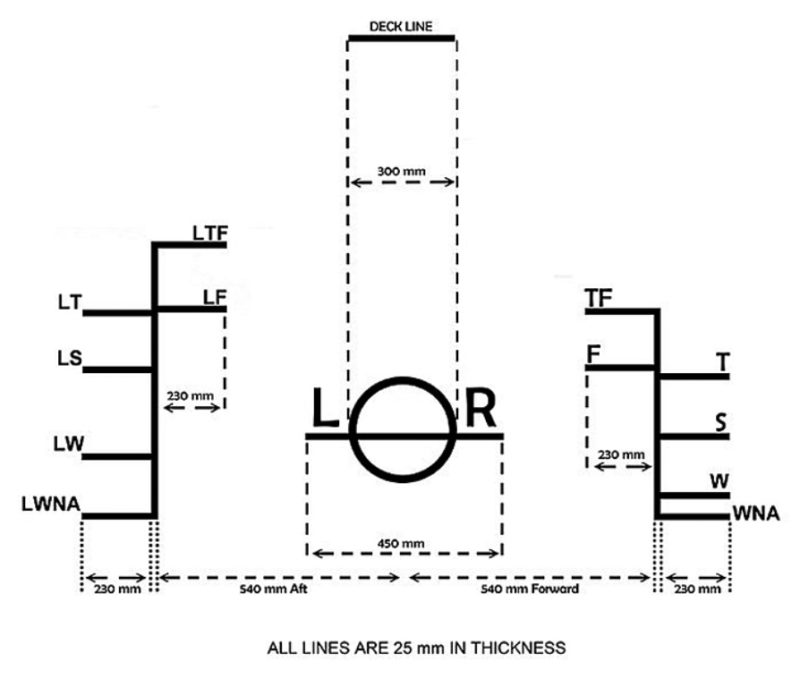 But back to the WNA line which is a bit below the W line maybe a foot below the S line. What difference does it make? Probably those who have been out in a winter storm in the North Atlantic would say, “not a lot”. Meteorologically the northern North Atlantic is prey to the Icelandic Low which moves south at that time of year, as does the Azores High, allowing depressions to develop somewhere near the coast of Canada and dash across towards Europe at about the latitude of the Shetland Islands. The winds process anticlockwise around the depressions and sometimes secondaries develop in the tails of the main weather patterns. The strength of the wind depends in part of the barometric pressure of the centre of the low, or more correctly on the pressure gradient and so in the lower quadrant of the secondaries hurricane force winds are not uncommon.

So, back in about 1964 I was Third Mate on the Crystal Sapphire which was the flagship of the Sugar Line fleet, owned by Tate & Lyle. It was a midships and aft geared bulk carrier. We, the mates, lived in the midships section, with the bridge on the top, and the engineers lived down aft with their engines and the funnel. It was a five hatch ship, later apparently to have a sixth hatch added. Each of the hatches was secured by a set of MacGregor hatch covers, and the derricks were powered by steam winches.

One of our voyages was from the UK to Philadelphia for a cargo of coal which we were to take to Rotterdam, starting off in late December and arriving in Philadelphia at Christmas. On Christmas Day we were swinging round the pick (at anchor to non seafarers) waiting for our berth to be prepared, and at each change of tide we seemed to be altering our position. On one of the captain’s occasional visits to the bridge I told him what I thought, and suggested that at the next swing we were going to demolish a derelict jetty on the riverside. He accepted this information with some equanimity, and in retrospect I imagine he was turning over in his mind the relative problems which he would have to face, firstly if the ship knocked the jetty down, or alternatively the difficulties of hiring a pilot, changing our position and finding a better anchorage, all of it at some cost. So on the next swing we did knock down the jetty.

Later we were moved under the coal loading system, which was a pretty primitive device. The coal trucks were lifted up to a height and upended with the intention that the coal would cascade down a chute into the hold. But the very first truck to be lifted did not deposit any coal into the ship, nor the second, and we were to find that due to a bit of rain followed by a deep freeze all the coal was frozen into the trucks. It took a few days for the shippers to rig up steam hoses and stuff necessary to free the coal and eventually around New Year we were loaded with about 10,000 tons. And so we left the port and started out on the way back to Europe.

The Sugar Line masters were quite experienced North Atlantic guys, and even I, as the lowly Third Mate had done the transit a few times, so it was probably just overconfidence in the ship which caused the captain to start off on a great circle. In a few days we were north of a deep depression with the barometer reading 936 mb. The pressure in the eye of a hurricane is usually said to be less than 990 mb. The Crystal Sapphire was not the most powerful ship in the world, but even so we necessarily had to slow down, fearing that the forepart would be damaged by wave action. And so we made our way slowly towards Europe.

There were significant moments during the voyage which I remember. One day we saw another ship, which seemed to be a substantial general cargo vessel, going the other way, towards North America running before the precipitous seas. One moment the ship was high on the top of a wave, and the next it had disappeared, right up to the top of the masts.

Here's how MP, Samuel Plimsoll set about a legal requirement for ships to be provided with a loadline which was included in the Merchant Shipping ...