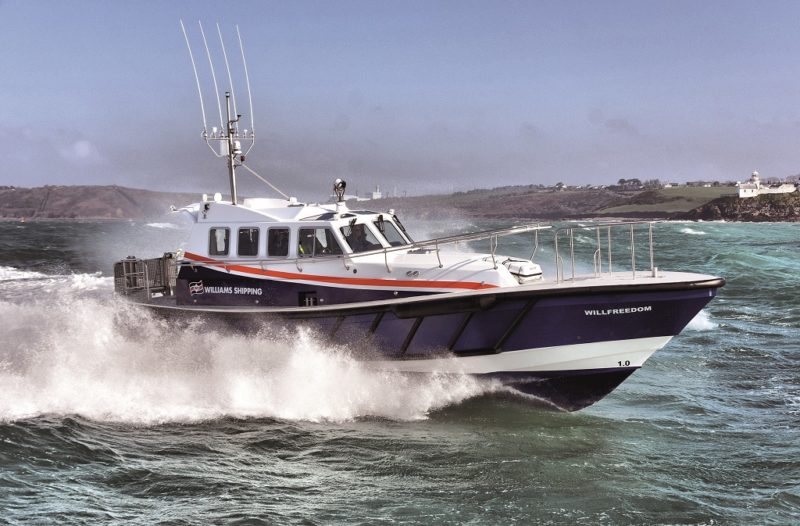 The working craft that are a constant feature of our harbours, ports and waterways are often disregarded in favour of the larger sea-going vessels that share these environments. However, these working vessels are actually a major piece in the jigsaw that is today’s shipping industry. Crew transfer and Pilot Launches provide a frontline role to keep the bigger ships moving to/from ports and have to go out in all weathers. Williams Shipping of Southampton now has (at the time of writing) a fleet of four launches for various work including personnel transfer, safety patrols and surveying plus three RIBs (Willnip/Willzip and Tigershark). The launches are the Willing, Willfetch, Willventure II and the new Willfreedom. The latter is a 15m long Interceptor 48, a Pilot vessel built by Safehaven Marine in Ireland. The June 2021 edition of Shipping Today and Yesterday featured a Newbuild on the Neptune Marine-built Eurocarrier 2209, Willchallenge, and now it is the turn of the Willfreedom. Originally this was intended to be a joint feature with ABP’s new Pilot Cutter Mayflower but the required information on the latter did not arrive in time.

From Speculation to Accumulation

Southampton-based Williams Shipping operates a fleet of blue work vessels and tugs that can be seen in operation around Southampton, Southampton Water and the Solent area. This company was founded in 1894 when George Williams gave up his career working on windjammers to set up his own business. Aged 30, George acquired a small pinnace which was being sold by the Royal Navy. This pinnace was a small open boat which had been used for rowing crews out to Naval Vessels moored in Portsmouth Harbour. He rigged a sail and brought the vessel to Hythe on the banks of Southampton Water and set to work, converting it into a small sailing barge which was able to carry up to 20t of cargo. Upon completion, the barge, now named Spec (reflecting this speculative venture) was moved down river to the small creek of Ashlett. It was not long before George was successful in acquiring his first cargo, collecting a consignment from the Isle of Wight for delivery to Southampton. Once his first voyage was completed, he soon gained a reputation for delivering the reliable service which has become the cornerstone of Williams Shipping‘s development. George’s son Jim took over the reins eventually and it was not long before he acquired more modern and larger barges which became a regular sight on the Solent, Southampton Water and River Medina in the Isle of Wight. With the building and development of the oil terminal at Fawley, the business diversified into providing services to the increasing number of tankers arriving with crude oil from the Middle East. After the outbreak of World War 2, the firm was requisitioned by the Government providing a range of important services to the many ships involved in a variety of roles as part of the war effort.

The Exxon Valdez - An Environmental Disaster