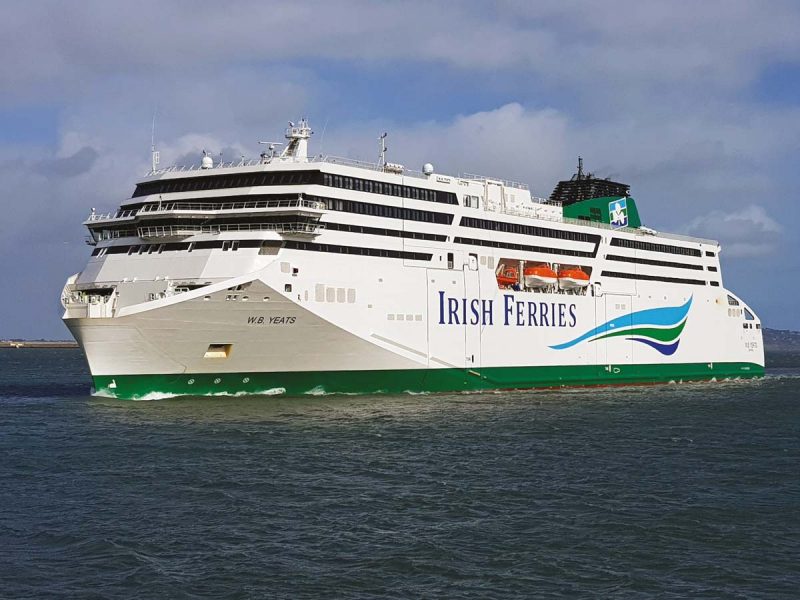 A new era in the history of Ireland-France ferry services began on 30th May 2016 when the Irish Continental Group (ICG) placed a €144 million order with Flensburger Schiffbau-Gesellschaft (FSG) in Flensburg, Germany, for a new ship to operate Irish Ferries’ Dublin-Cherbourg service March-September and Dublin-Holyhead over the winter months. For the time being, the winter service to Cherbourg will be handled by the chartered 26,375gt/2011 built Epsilon, a Visentini built Ro-Pax ship that also operates Dublin-Holyhead in the summer (until another newbuild is delivered in 2020).

ICG secured €75 million in financing from The European Investment Bank (EIB) towards the capital cost of the new ship with a further €80 million made available for the second newbuild project, which has commanded a price of €162.5 million. These long-term loans were made under the EU’s Green Shipping initiative, aimed at supporting newbuild or retrofit projects regarded as having particular merits as to emission-reducing and energy-saving elements.

The present-day ferry service between the two countries can trace its roots back to 1973 when Irish Continental Line was formed as a joint venture between Irish Shipping, Fearnley & Eger and Swedish company Lion Ferry. The first route was Rosslare-Le Havre using the 7,819gt/1973 built Saint Patrick. This vessel was renamed Saint Colum I in 1982 and ended her operating life as the Express Poseidon in the Greek Islands in 2005. When Irish Shipping went into liquidation in 1984, Irish Continental Line was the subject of a management buyout and re-emerged as Irish Continental Group.

In 1992, ICG took over the British and Irish Steam Packet Company Limited, which traded as B+I Line, and operated services on the Dublin-Holyhead and Rosslare-Pembroke routes. The new trading name was announced as Irish Ferries Ltd. and a 10 year/€500 million fleet renewal programme followed. When the new ferry operator was unveiled, the Rosslare-Cherbourg/Le Havre services were in the hands of the 10,256gt/1973 built St. Killian II (enlarged in 1981) and the 7,984gt/1973 built St. Patrick II. In 1995 the Le Havre calls were replaced by Roscoff and the ageing ships were themselves replaced in 1998/1999 by the 25,745gt/1982 built Normandy (the former St. Nicholas/Stena Normandy). This ship was then replaced when ICG acquired Color Lines’ 31,914gt/1987 built Kronprins Harald and renamed her Oscar Wilde for a debut on the Rosslare-Cherbourg/ Roscoff schedule in 2008. The christening of the Oscar Wilde heralded the start of the Irish literary themed naming policy for Irish Ferries, which was followed by the 5,992gt/1999 built Jonathan Swift and the 50,938gt/2001 built Ulysses.

The steel cutting ceremony for Yard No. 771, Irish Ferries’ first newbuild since 2001 and the first new Ireland-France service newbuild since the Saint Patrick in 1973, took place at FSG on 7th April 2017 and the keel laying followed on 11th September 2017. The ship’s name was announced in October 2017 as W. B. Yeats, the result of an online naming competition that attracted 100,000 entries. The winning name suggestion was made by Lee Maxwell, who won free travel for life from Irish Ferries. Continuing the literary naming pattern, the ship takes her name from William Butler Yeats who was born 13th June 1865 and died 28th January 1939. He was an Irish poet and one of the foremost figures of 20th-century literature. In his latter years he served as a Senator of the Irish Free State for two terms and was a driving force behind the Irish Literary Revival. W. B. Yeats was born in Sandymount, Ireland and educated there and in London. His earliest volume of verse was published in 1889.

The W. B. Yeats was named by Ms Rikki Rothwell, daughter of ICG Chief Executive Eammon Rothwell, at FSG on 19th January 2018 and the ship’s hull was subsequently launched from the covered shipbuilding hall at 1200 local time. The shipyard has regularly subcontracted the construction of the superstructure sections to Marine Projects Ltd. in Poland and, on this occasion, the forward and aft segments were built via this routine. Due to the volume of work, Marine Projects then subcontracted Stoczina in Gdansk to fabricate the flat steel sections and Gdansk-based Holm Construction Ltd. to build the middle section of the passenger accommodation. The superstructure sections were each transported by barge from Poland to Germany and had already been partially fitted out with the majority of the ceilings, walls, floors, ducting etc. On 20th January the forward and middle sections arrived at FSG, followed by the aft section two days later. The three modules, the heaviest of which was 2,000t, were lifted onto the hull in a bow to stern sequence by the heavy lift cranes Matador and Taklift on 6th/7th/8th February. Unfortunately, it would appear that this routine method of sectional construction encountered difficulties and the associated work to correct the problems triggered a series of delays to the ship’s delivery, which became a very sorry tale indeed. The original maiden voyage was scheduled for 6th July 2018 but on 20th April Irish Ferries had to announce that all sailings 12th-29th July had been cancelled. Then, on 6th July all 2018 France-Ireland bookings on the W. B. Yeats were announced as cancelled due to delays with deliveries and the fitting out process. Around 8,500 bookings were affected and costs to Irish Ferries reportedly exceeded €7 million. Some 88% of affected passengers were still able to travel via the Epsilon, Oscar Wilde or via a land-bridge alternative to Wales and then onward travel from Plymouth/Portsmouth. News reports later suggested that the mid-section of superstructure had wrongly positioned deckheads, requiring all walls, fixtures and fittings to be removed and refitted once the ceilings had been realigned with the rest of the superstructure. A weight issue with this same section was also reported locally. Either way, FSG endured extreme pressure to right the situation and faced considerable financial implications. Ironically, FSG had expanded its ferry building ambitions from Ro-Ro to Ro-Pax to boost profitability but the latter is a far more complex field. Indeed, FSG has endured very public problems with the completion of CalMac’s 8,680gt/2014 built Loch Seaforth, the 51,388gt W. B. Yeats and now the 42,500gt Honfleur. Hopefully the TT Line and second Irish Ferries build will avoid such complications.

Flensburger Schiffbau-Gesellschaft was founded in 1872 and the yard has built over 750 ships, including Offshore and Ro-Ro vessels, passenger ferries, and naval vessels. The company takes pride in tailor made designs and solutions for both ship-owners and operators alike. FSG’s first newbuild was the Doris Brodersen in 1875, followed a year later by the cargo ship Septima. In December 2008 FSG was the subject of a management buyout from the previous Owner, the Oldendorff Group in Lübeck, and in 2014 the shipyard became a subsidiary of SIEM Industries following a further rocky period financially. Losses of around €7.5 million were recorded in 2017 but still the shipyard battled on to win contracts and complete existing orders. The issues with the W. B. Yeats was a severe blow that FSG simply did not need and it got to the point in late January 2019 when the company’s debts could not be serviced. As can happen, the yard’s orderbook totals in excess of €1 billion but the cashflow was not sufficient for the day-to-day requirements. Sadly, on 29th January, FSG and Brittany Ferries reluctantly announced a delay to the delivery of the newbuild Honfleur from July 2019 to late 2019 as a result of the difficulties. The presiding CEO of FSG was removed and replaced by Alexander Gregg-Smith from the Siem Group on 31st January and, on 12th February, Siem Europe announced that it had signed an agreement with an external investor, Sapinda Holding B.V., for the purchase of 76% of the shares of the business of Flensburger Schiffbau-Gesellschaft mbH & Co. KG. This investment provided a €33 million cash injection for FSG and thus ensured the continuation of the shipyard’s business operations. Siem Europe remains an active shareholder and holds the majority of the Supervisory Board of FSG. The financial rescue plan had also involved intensive talks with the regional state government of Schleswig-Holstein. Once the various construction issues had been addressed, progress could then be made towards the landmark stage of sea trials and, ultimately, delivery to Irish Ferries. On 17th October an alleged act of sabotage took place when a valve on the main engine cooling system was deliberately closed during engine testing. This caused one of the four engines to overheat with the resultant damage requiring time consuming repairs by MaK, part of Caterpillar Marine. A Police investigation followed and the already deferred sea trials were again set back to 29th October when she ventured out under the cover of darkness. The trials took her towards the Danish Island of Bornhlom and, once everything had been tested successfully, the ship returned to FSG on the morning of 7th November. Despite all the issues faced by FSG in recent times, it must not be forgotten that so many highly successful ships have been delivered from the yard including a quartet of 19,722gt/2011-2012 built Ro-Ros for Seatruck (Seatruck Progress/Precision/ Power/ Performance), UN Ro-Ro newbuilds such as the 34,182gt/2012 built UN Karadeniz and the most recent Ro-Ro newbuilds, the 32,936gt/2018 built Alf Pollak and 32,887gt/2019 built Maria Grazia Onorato. The very latest newbuild, Yard No. 780, also deserves a mention as she was launched on 8th April at FSG. Named Leevsten (meaning Dearest in Lower German dialect), the 209.70m long and 283 trailer/4,076 lanemetre capacity ship will be delivered in September 2019. As per the wishes of the Shareholders and the Managing Director Alex Gregg-Smith, the name of the ship is dedicated to the staff of FSG. An employee’s life partner took the role of Godmother to name the ship.