Newbuild of the Month 9th October 2018 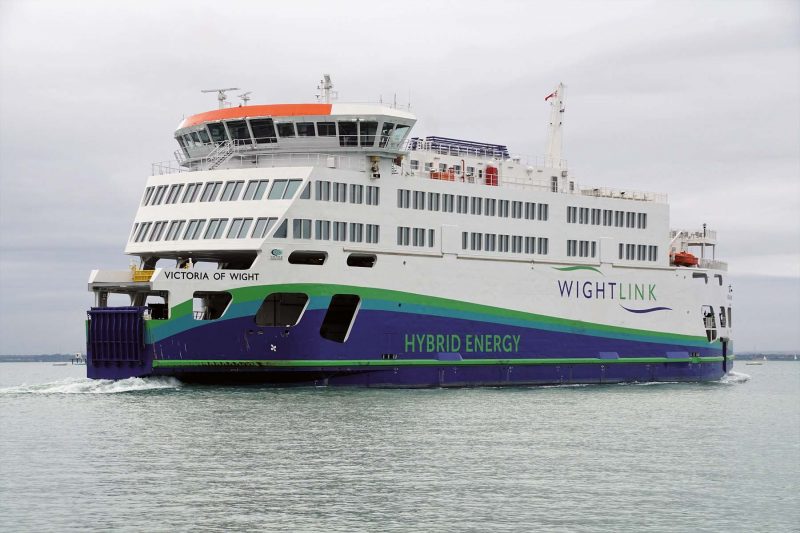 There has been a vehicle ferry service operating between Portsmouth and Fishbourne, Isle of Wight, since 15th March 1926 when the 6-mile route (which is subject to low tide diversions around Spitbank Fort) opened for business. The route was transferred to Wootton Creek by the Operator, Southern Railway, from a berth by Ryde Pier that was subject to considerable tidal restrictions. The primitive tow boat service was transformed into a Ro-Ro service using the small, 15 car capacity Denny built Fishbourne, Wootton and Hilsea built 1927-30. The route went from strength to strength through the Sealink and Sealink British Ferries eras with the Operator changing to Wightlink in 1990. By 2001 a dozen vehicle ferries had been built for the service.

On 28th April 2016 Wightlink signed a contract in the region of £30 million for the building of a new ship that would be the most environmentally friendly ever to serve the Isle of Wight with delivery scheduled for 2018. Designed by Houlder, the new flagship was to be larger than the 5,952gt/2001 built St. Clare and built to the maximum footprint possible for a ferry using the confines of the Camber Docks in Portsmouth. Hybrid battery technology would also be used on a cross-Solent ferry for the first time as well as conventional marine gas oil for a diesel electric system to reduce emissions and make the vessel quieter. The newbuild was part of an overall £45 million project to upgrade the company’s gateway route to the Island and included the provision of two-tier linkspans at both terminals, an upper level marshalling area and new customer services building at the Portsmouth Gunwharf terminal, new mooring technology and the conversion of the routes incumbent flagship, the St. Clare, to double deck loading/unloading, something her design had cried out for from delivery. The contract to build the new ship was awarded to the Cemre Shipyard in Yalova, Turkey, an establishment known for ferry, Ro-Ro and specialised newbuilds.

More than 50 shipyards around the world, including the UK, were invited to bid for the building contract. Wightlink received 22 tenders and shortlisted five yards from Turkey, Spain and Croatia before choosing Cemre on the Sea of Marmara, at Yalova, south of Istanbul. The decision was made on the grounds of value for money and the capacity to deliver the vessel within two years. No U.K based Shipbuilder was able to build such a ferry in the timescale or to the required budget. Indeed, there was little home-grown interest in the contract but of course there was an outcry as to why Wightlink did not use a British yard, something that rattled on even beyond the arrival of the ferry at her new home. Cemre was established in 1996 as a site for repainting works, ship repair and scraping activities. In 2005 Cemre leased an area from the Pendik Military shipyard in order to develop the company and subsequently entered the shipbuilding industry. The first ship to be built was the Havila Mars and she was delivered to the Havyard Grup A.S. in 2006. In 2008 Cemre’s own shipyard was founded in Yalova in the Altınova shipyard region, which is the hub of the Turkish shipbuilding industry. A 10,000m2 workshop was established 500m away from the shipyard and the general shipyard site grew to an area of 70,000m2. The first ship to be delivered from the new site was the Havila Jupiter. A 7,000m2 indoor hangar was added in 2011 and in 2012 two new slipways were completed in order to increase annual shipbuilding capacity. In 2015 a further 65,000m2 was added to the shipyard site.

The steel cutting ceremony to signal the start of the construction process for Yard No. NB52 took place on 4th October 2016 in Yalova. The new ship was initially dubbed the G-Class by Wightlink but this was later modified to H-Class as in H for Hybrid. Sections of the ship were then fabricated with the keel laying taking place in November 2017. NB52 quickly took shape and, at 1150 local time on 7th February, the new ferry was launched down the slipway to cheers from Wightlink staff and hundreds of shipyard workers. Wightlink’s Project Manager, John Burrows, cut the ribbon to signal the launch. By this time Wightlink had held a competition for staff to decide on the name of the new ferry.

Five suggested ‘Victoria’ in honour of Queen Victoria who loved the Isle of Wight, with her Island residence of Osborne House being just along the coast from Fishbourne at East Cowes. As the name Victoria was already in use on another ship, the variant Victoria of Wight was chosen instead. So, complete with a striking “Hybrid Energy” variation of the company livery, the Victoria of Wight took to the water draped in the national flags of Turkey and Great Britain. The fitting out process continued and, on 12th June, it was revealed that the ship had impressed during her first 3 days of sea trials in the Sea of Marmara. Tests completed included the hybrid system, full speed trials, manoeuvring, the deployment of one of the ship’s four marine evacuation systems and the car deck drenching system.

The new ferry from Wightlink is this month's featured newbuild