The many British tourists disembarking at the Ogden Point Cruise Terminal, a mile from downtown Victoria, often remark that the city is ‘More British than Britain’, due largely to the imposing large Empress Hotel, opened in 1908 in the Edwardian ‘French Chateau’ style to a design by Francis Rattenbury. This is a smaller version of the Frontenac Chateau opened in 1893 on the Frontenac Heights above the Port of Quebec for Canadian Pacific Hotels. After purchasing the Canadian Pacific Navigation Company in 1901 to form the British Columbia Coast Steamships division, the Canadian Pacific Railway (CPR) company, through its Canadian Pacific Hotels division, then built the Empress Hotel overlooking the Inner Harbour at Victoria. The Canadian Pacific Steamship Company operated ferries out of Victoria on a triangular route between Victoria, Vancouver and Seattle, with passengers then able to board deep sea Canadian Pacific three funnelled liners for the Far East. However, the creation of BC Ferries in 1960, based in the Parliament Buildings at Victoria (BC), put the CP Ships western passenger trade on a downward trend.

The Fairfield built CP ferry Princess of Nanaimo 6,787grt/1950 was transferred to the eastern Bay of Fundy CP service in 1963, and the iconic twin funnelled Fairfield built sisters Princess Marguerite and Princess Patricia, both 5,911grt/1949, later ended their triangular service between Vancouver, Victoria and Seattle. Princess Patricia was chartered out from the summer of 1963 for Alaskan cruising, with winter in lay-up, while Princess Marguerite continued to serve Victoria until the CP passenger service was withdrawn in September 1974. However, there was a need for the route and to avoid a subsidy she was purchased by the British Columbia Steamship Company (1975) Ltd. and operated by the Province of British Columbia Department of Transportation until the service was cancelled on 31st December 1979. 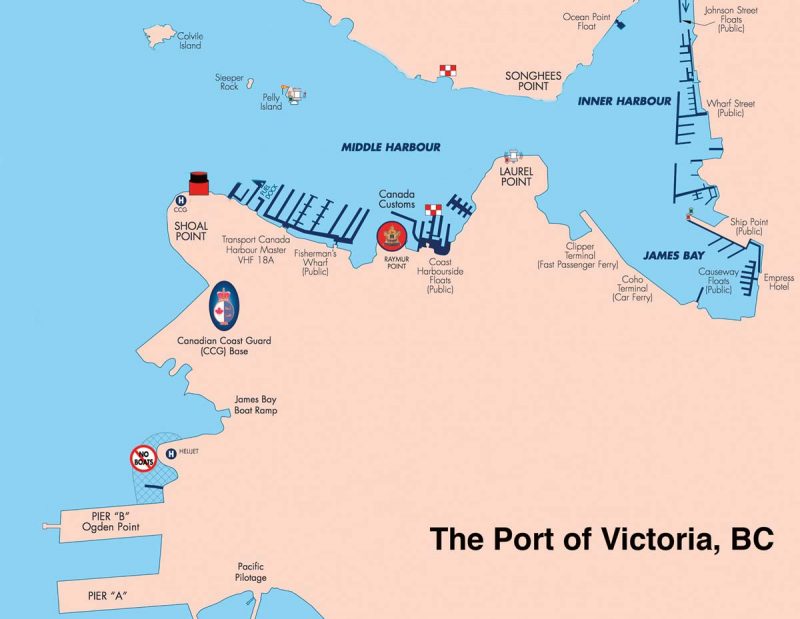 History Of Victoria (BC)

Victoria lies at the south eastern tip of Vancouver Island about 100 kilometres to the south of Vancouver and to the north of Seattle, and is bordered by the eastern end of the Juan de Fuca Strait after rounding Cape Flattery at its western end from the wild Pacific Ocean, and also the Haro Straits. It is the capital city of British Columbia with the current population of Victoria at 85,792 (2016), and it has an outer Capital Regional District (CRD) that takes in many neighbouring towns. The Native American tribes of the Coast Salish Songhees lived in settlements to the east of Victoria harbour, and the Esquimalt tribe lived to the west of it. The tall, colourful totem poles at Thunderbird Park in downtown Victoria at the entrance to the Royal British Columbia Museum are a testimony to these two tribes and the many other Native American tribes living along the Juan de Fuca Strait. Tourists can watch their descendants carving new handsome totem poles, which show and preserve the legends of the many different tribes from the aboriginal peoples of the North West Coast.

The Spanish explorers Manuel Quimper, Gonzalo Lopez de Haro and Juan Carrasco arrived in the summer of 1790 aboard their flagship Princesa Real in the Juan de Fuca Strait, where they claimed Esquimalt harbour for Spain, naming it Puerto de Cordova. However, James Douglas of the Hudson’s Bay Company in 1843 built Fort Victoria, named of course after Queen Victoria, on a site overlooking Victoria Harbour, rejecting Esquimalt harbour to the west because of its dense undergrowth. Douglas was based at a fort on the Columbia river, and his employer wanted an alternative fur trading post after the 49th parallel border settlement between Canada and the United States in 1846. The twin funnelled paddle steamer Labouchiere exported the furs for the Hudson’s Bay Company.

A beautiful walk through the forest links the two harbours today, with a seventeen gun salute fired in Victoria Harbour on 11th March 1850 by a Royal Navy frigate to witness Richard Blanshard being installed as the first Governor of the newly formed Colony of Vancouver Island. James Douglas succeeded Blanshard as Governor and concluded eleven treaties with the indigenous North American tribes between 1850 and 1854 to secure title to the land near Victoria. These today are principally the Songhees and Esquimalt First Nations, and the Tsawout and Tsardip tribes living on the Saanich peninsula. They only represent 4% of the current Victoria population, with Canadian English having 84%, and Chinese and South East Asian peoples having 12%.

During 1859/60, the Fisgard Light and Race Rocks Light were built on islands outside of Esquimalt and Victoria harbours as the first lights on the long coastline of British Columbia and still serve in that capacity today. The Fraser Canyon Gold Rush had just taken place in April 1858 with the local population of 450 people, whose lives centred around the Hudson’s Bay Company, boosted to five thousand in a few days and to more than 20,000 in a month, all living in tents around Fort Victoria and across the bay. This gold rush was followed in 1860/61 by the Cariboo Gold Rush, with prospectors struck by ‘gold fever’ arriving in ships from California and Australia in the harbour to further swell the tiny local population, with their town of Victoria becoming a city on 2nd August 1862. Prospecting lots outside Fort Victoria went up in price from $25 to $3,000 within a week.

A Classic Long Trip With The Bank Line

Victoria, British Columbia, Canada is our featured port this month