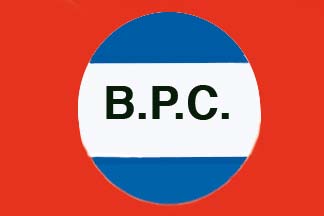 Vessels owned or chartered by the British Phosphate Commission (BPC) voyaged in the Pacific well off normal trade lanes to the remote islands of Nauru and Ocean Island to load phosphates for Australia and New Zealand. These twin circular shaped islands were topped with a thick crust of phosphate and lay just south of the equator in the Gilbert Islands Group.

Nauru has a coastline of 18.6 miles with no harbour, and thus vessels were loaded by barges inside the reefs, and later at cantilever loading cranes, the first of these was commissioned in 1930. Mining commenced at Ocean Island in the year 1900 by the Pacific Islands Company Ltd. with principals of John T. Arundel (1841-1919) and Lord Stanmore (1829-1912), the financiers that negotiated with the German company that controlled the licences to mine on the two islands.

The Gilbert Islands are scattered over a vast area of the Pacific of five million square kilometres, and consist of four groups of atolls, circular or horse shoe shaped masses of coral enclosing a lagoon. The groups are the sixteen Gilbert Islands including Tarawa atoll, the eight Phoenix Islands, the three Line Islands, and Nauru and Ocean Island. Spanish explorers had first sighted the islands in the sixteenth century, but the first Europeans to land were British in 1764. The Polynesians were converted to Christianity by British missionaries, and the Gilbert Islands joined with the Ellice Islands in 1902 to form a British protectorate, to which Ocean Island had been added in 1900.

A start in the shipping of phosphate was made in 1901, with a few thousand tonnes shipped in 1901 and some 13,350 tonnes shipped in the following year. These totals would have been higher if the fully loaded chartered vessel Moonstone had not been lost on Ocean Island’s reef in July 1901. In 1902, the interests of the Pacific Islands Company Ltd. were merged with Jaluit Gesellschaft of Hamburg to form the Pacific Phosphate Co. Ltd. (PPC) to mine both Nauru and Ocean Island. Germany had annexed Nauru in 1888, and under a policy established by the German administration, royalty payments were made to the landowners. Nauru had been taken by Australian forces during World War I, and thus the British Phosphate Commission (BPC) could be formed on 1st July 1920 by a Board of Australian, New Zealand and British representatives to purchase the assets of the PPC for £3.5 million, and began to manage the assets from 1st January 1921. In 1921, the royalty payments to Nauruans were fixed at 1.5% per tonne of phosphate extracted. This increased to 7% in 1927 and in the 1930s to 9% of the phosphate revenues. Significant profits were made by the BPC during their sixty year extraction tenure, running into millions of U.S. dollars per year.

Chartered vessels were used by the BPC at first, including vessels of the Union Steamship Company of New Zealand and Tasmanian Steamers (Pty) Ltd., as well as larger tramps e.g. Luciston 5,017/24, and the unlucky Ooma 3,991/05 lost at Ocean Island on 8th February 1926, and Hartfield 4,661/15 dragging her moorings inshore and damaging herself at Nauru in the same month. Ocean Transport 4,643/13 of Houlder Brothers was lost at Ocean Island on 30th January 1928 after her propeller had fouled the lines of the mooring buoy. Nauru Chief 2,934/21, completed by the Nyland Verft yard at Oslo, was purchased while fitting out for Norwegian owners, and was the first owned vessel for the BPC, with the fleet managed for many years by A. H. Glaze, the General Manager of the BPC in Melbourne. Cantilever number 1 was completed at Nauru in September 1930 with a loading rate of one thousand tonnes per hour, followed by Cantilever number 2 in 1961, after having been designed and built in Australia with a greater loading capacity of 1,500 tonnes per hour.

The first vessel to have a ‘Tri’ prefix to her name (to signify the tripartite agreement of Australia, New Zealand and Britain) was the new steamer Triona 4,413/31 completed by the Govan yard of Harland & Wolff Ltd. She was followed by the motorships Triaster (1) 6,032/35, and the sisters Triadic and Trienza, both 6,378/38, all fitted with bow sheaves to handle the mooring lines. The permanent moorings off Nauru were anchored in 160 fathoms of water, and ships loading at the island had to tie up at these mooring buoys. Periodically, the cables anchoring the buoys were taken up for inspection or replacement, and this work was done by one of the four pre-war ships, all fitted with mooring laying gear to run over the cable sheaves at the bow. Several Bank Line ships were chartered for the phosphate trades in pre-war and post-war years.