The Port For Beijing 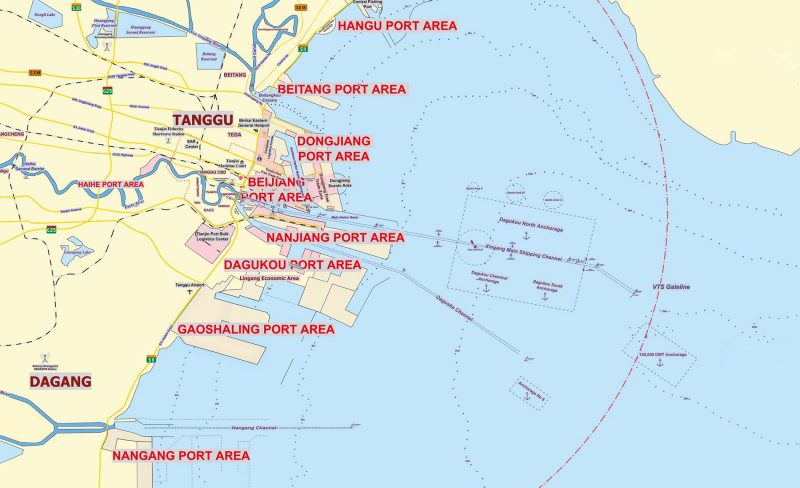 Tianjin (Tientsin) is one of the three great cities of China, the others being Beijing, eighty five miles west of Tianjin, and Shanghai. All three cities have administrations that report directly to the Central Chinese Government, whereas the 23 provinces and 5 autonomous regions of China do not report directly to the Government. The Tianjin to Beijing region is heavily populated with a density in excess of two hundred persons per square kilometre, and Tianjin having a population of around 15.5 million. Tianjin is in North Eastern China, and borders Hebei province and the Beijing municipality, and is bounded to the east by the Bohai Gulf of the Yellow Sea. The main industries are the manufacture of seamless steel pipes, oil refining, textiles, electrical products, steel rolling mills, copper refining, salt production, machine tools, chemicals, tobacco, food processing, shipbuilding and ship repair, and the handling of over 20 million containers and over 600 million tonnes of cargo per annum in the busy Port of Tianjin. The top 20 container lines in the world call at Tianjin, with 115 regular container services operated by 60 liner companies.

History Of The Port Of Tianjin

The Tianjin area where the Hai river empties in Bohai Bay was marshy and poorly drained for many centuries until a customs post was set up in mediaeval times. The port was formally established during the early era of the Tang Dynasty (618 AD to 907 AD), and increased in scope during the Ming Dynasty (1368 to 1644) and the Qing Dynasty (1644 to 1912). The first ever British mission to the Chinese emperor was in September 1793 when Viscount George Macartney arrived in Tianjin with two ships. The first was a 64 gun warship and the other was the largest and fastest ship in the fleet of the East India Company. They had taken a year to reach this port in North Eastern China, from where the goods of the mission were unloaded into 85 wagons and 39 handcarts and taken to the capital of Beijing. This was one of the greatest missions ever despatched by Britain to China. Britain then fought the First Opium War of 1839/42 to preserve its sale of opium to the Chinese in return for silver, after Chinese attempts to supress the trade had led to their loss of Hong Kong to Britain.

During the Second Opium War from 1856 to 1860, Western nations, and particularly Britain and France, demanded access to China. An Anglo-French force stormed Tianjin in 1856 and captured and deported its Governor after the city had quickly fallen. In April and May of 1858, the same force took the Dagu forts at the mouth of the river, and Beijing was again at the mercy of the foreigners, and the Qing Emperor capitulated. The result was the Treaty of Tianjin, which imposed heavy terms on the Chinese. Six Treaty ports were to be opened by the Chinese to Western powers, four of them in the heavily guarded areas of Tianjin and Shandong, with four more on the Yangtze river in the Nanjing and Hankou areas.

Travel in the Treaty ports was to be unrestricted and passports issued to enable travel across the whole of China. The British Ambassador was to be accompanied by his family and retainers, and the import of opium from India was legalised. However, the Chinese did not honour the Treaty of Tianjin with an Anglo-French force repulsed in 1859 at the Dagu forts. A year later, 20,000 British and French troops took Tianjin again after some of their captured colleagues had been executed by the Chinese. The summer palace of the Qing emperor was looted and burned to the ground, with great loss of face to the Qing dynasty and its emperor fled in hiding to the mountains. China was a very poor nation at this point of time and its entire military forces numbered no more than two thousand troops.

Our Port of Call this month finds us in Beijing, China