Every year some of the world’s most horrific storms form over the Pacific Ocean before moving across the Philippines and then reforming in the South China Sea and making a devastating landfall on the coast of southern China. Measuring hundreds of kilometres in diameter, these meteorological super storms can create immense amounts of rain and with severe winds of up to 260 kilometers an hour. Over many decades Hong Kong has learned to adapt and prepare to cope with these typhoons, but the city still comes to a total halt when these significant winds arrive. The Typhoon Season in Hong Kong usually spans the months of May to October, with July, August and September being the most prolific months for Typhoons.

Severe Typhoon Gloria formed to the east of Luzon in the western Pacific Ocean and tracked across the northern Philippines, intensifying as it progressed across the China Sea towards the Chinese mainland. On 22nd September 1957 the Royal Observatory in Hong Kong upgraded it to a ‘Severe Typhoon’ just prior to the system making landfall. It had a devastating effect on the infrastructure of Hong Kong. 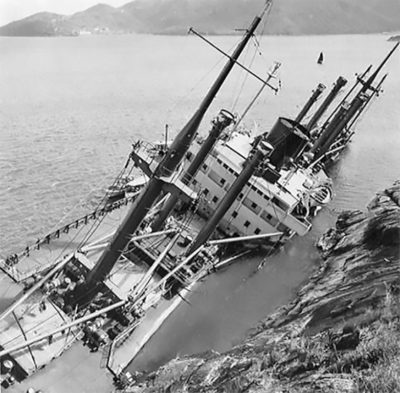 In September 1957 Typhoon Gloria hit Hong Kong causing massive damage and many marine casualties, one of which was the grounding of the 8,249grt Dutch Cargo Liner Tjibantjet on the rocks near Lye Yei Mun (Devil’s Peak area) at the eastern entrance to Hong Kong Harbour (above). The ship had recently completed a voyage from Moji to Hong Kong prior to her being stranded during Typhoon Gloria. The Tjibantjet lost both her anchors near Junk Bay during the Typhoon, and grounded heavily. She was successfully refloated in June 1958 and resumed service with her owners, Royal Interocean Lines, in May 1959 after substantial repairs. Following another 14 years of service, she finally met her demise in December 1973 when she was sent to Taiwan for demolition.

Typhoon Mary arrived on 8th June 1960 and was the worst Typhoon to hit Hong Kong in more than 20 years. Tremendous rainfall (more than 14 inches in 24 hours) together with winds of 119 kmh (64 knots), gusting to 194 kmh (105 knots) at times, recorded at Waglan Island, which gave it the infamous nick name ‘Bloody Mary’, a name which will go down in the history of Hong Kong

Typhoon Mary, also known as ‘Bloody Mary’ was an extremely damaging Typhoon in 1960. It began as a deep trough in the South China Sea. A tropical depression formed on 2nd June. It became a tropical storm on the next day, and received the name Mary. It slowly moved across the sea, strengthening to a typhoon. Mary made landfall in Hong Kong on 8th June, then transitted inland through Guangdong and Fujian provinces on the Chinese mainland. It re-emerged back to sea north of Taiwan and moved in the direction of the Pacific Ocean, south of Japan, where it once again strengthened into a Typhoon temporarily, before weakening and becoming downgraded on 12th June. 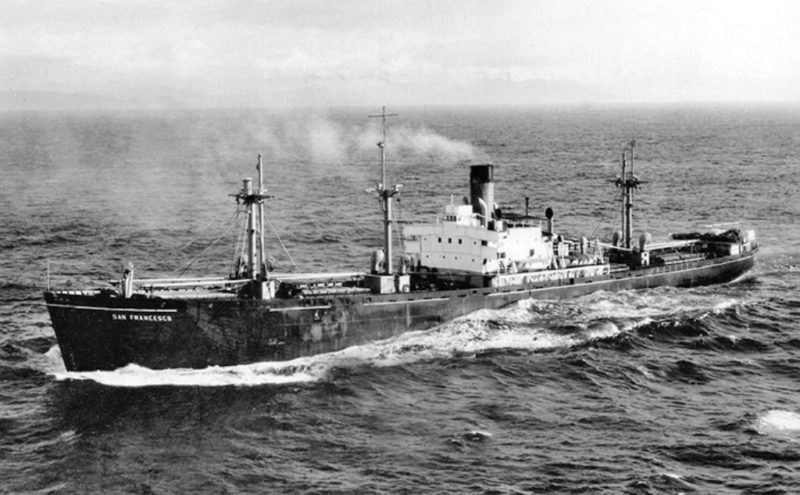 The 7,219grt Italian Liberty ship San Francesco (above), ex Samsylvan, sank in Hong Kong during the Typhoon. She was refloated but subsequently scrapped.

The 3,059grt Hong Kong registered cargo ship Shun Lee was driven aground on one of the Pratas Islands in the South China Sea and was wrecked. Her crew abandoned the vessel and took to the lifeboats.

During the 1960s one of the most serious Typhoons to hit Hong Kong was Typhoon Wanda in September 1962. Not only was substantial damage sustained to the colony’s infrastructure but some 36 ocean going vessels were either driven aground or wrecked in the devastation in locations right across the then colony of Hong Kong. The deep, landlocked indentation of Tolo Harbour and Plover Cove, flanked by high hills that protect the snug anchorage from Typhoons, remained a favoured haven for ships in Hong Kong. Located in the NE sector of Hong Kong’s New Territories, it is usually available for vessels drawing up to 8m draft. Unfortunately, the topography of the area did not always offer the protection sought from the weather, resulting in numerous Typhoon casualties. Some of which are captured below. 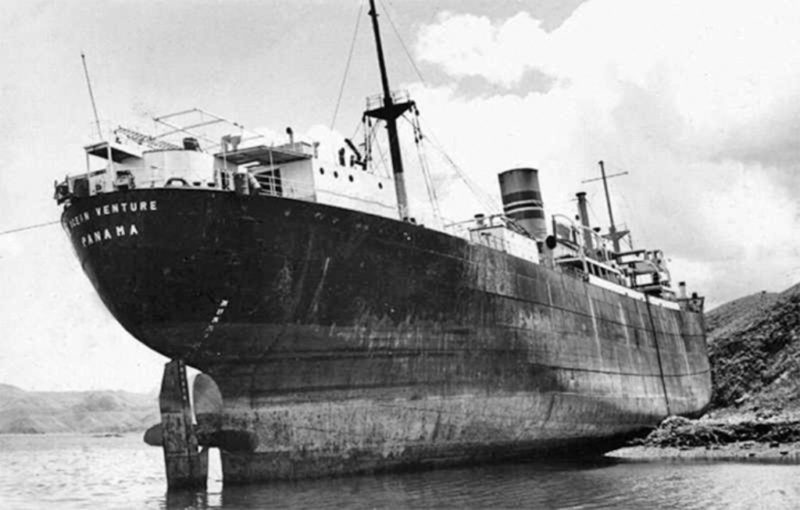 The 7,176grt Panamanian registered formerLiberty Ship Crescent was wrecked in Hong Kong at Tolo Harbour (above) 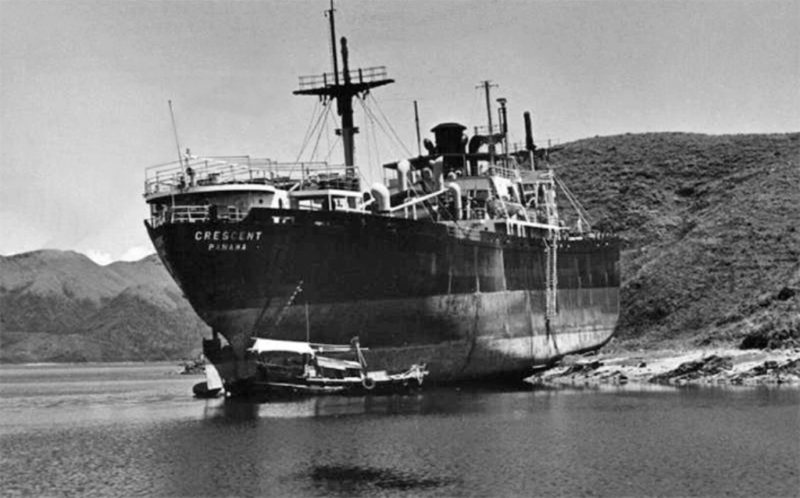 The 7,176grt Panamanian registered former Liberty Ship Crescent was wrecked in HongKong at Tolo Harbour (above) 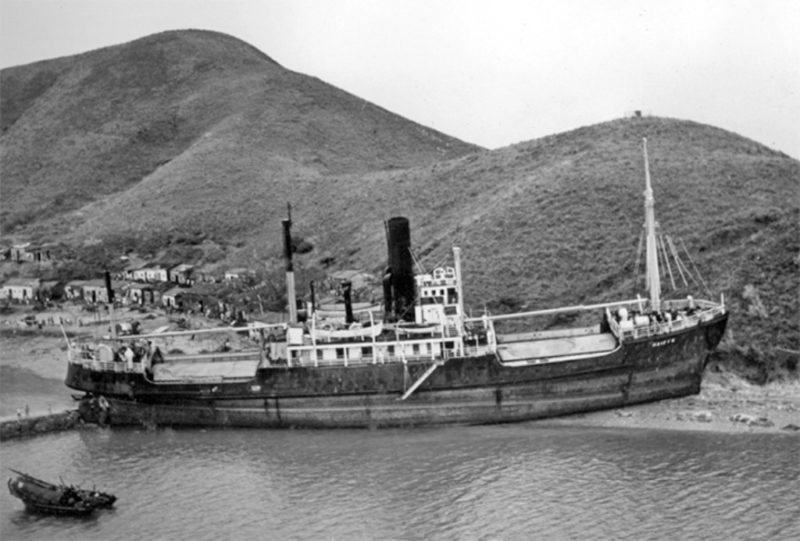 The 1,267grt cargo shipHai Jye hard aground at the east end of Harbour Island,Plover Cove (above) 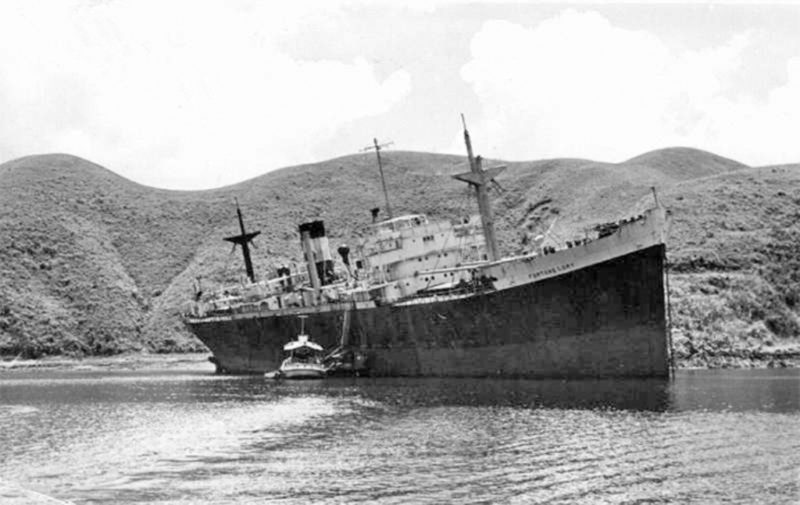 Despite being considered a safe haven, regret-tably not so for the 7,062grt Fortune Lory (ex Stanrealm). Pictured well and truly wrecked (above), again as a result of Typhoon Wanda in 1962

1964 was the most active year on record for the Pacific Typhoon season with 39 storms recorded. Typhoon Ruby was the 2nd worst Typhoon ever to hit Hong Kong. This storm formed north east of Luzon, in the Philippines, on 1st September. It tracked westward across the China Sea, rapidly intensifying as it progressed and was finally categorized as level 4 on the Typhoon scale. It struck Hong Kong on 1st September, with winds peaking at 140 mph (230 kmh) causing catastrophic damage to infrastructure and shipping. 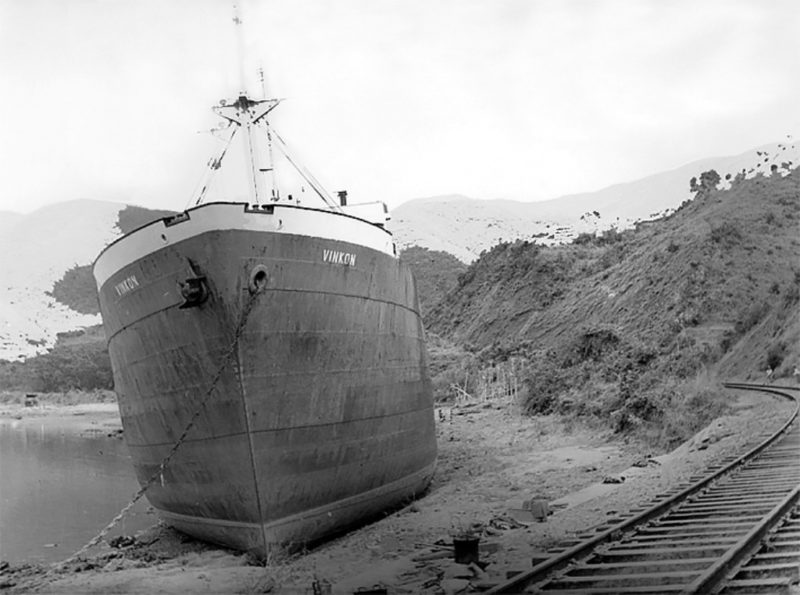 Pictured above high and dry, the 7,150grt Hong Kong managed ‘Park’ vessel Vinkon (ex Champlain Park) in Tolo Harbour. At low water one could walk right around the vessel. A bird’s eye view for passengers on passing trains!

The commencement of a new decade saw Typhoon Rose striking Hong Kong on 17th August 1971. Initially, this was classified as an area of unsettled weather to the west of Guam, later intensifying to a Typhoon on 10th August, before being downgraded to a tropical storm. Having again re-intesified, after only a few hours, it was again classified as a Typhoon and named Rose. The Typhoon then tracked west north westerly towards the Philippines, crossing northern Luzon where it weakened and moved into the South China Sea. The storm gained intensity as it progressed across the waters of the open sea and finally struck Hong Kong on 17th August with winds reaching 278 kmh (173 mph) at Tai Mo Shan in the central New Territories. Typhoon Rose was the most violent and intense tropical cyclone to strike Hong Kong since Typhoon Wanda in 1962. The huge storm surge, coupled with heavy seas proved disastrous to many ships offshore, at least 300 boats sank or were badly damaged by the typhoon and 88 deaths alone occurred after the Hong Kong-Macau Ferry Fatshan capsized and sank. Damage to infrastructure was massive throughout the Colony. 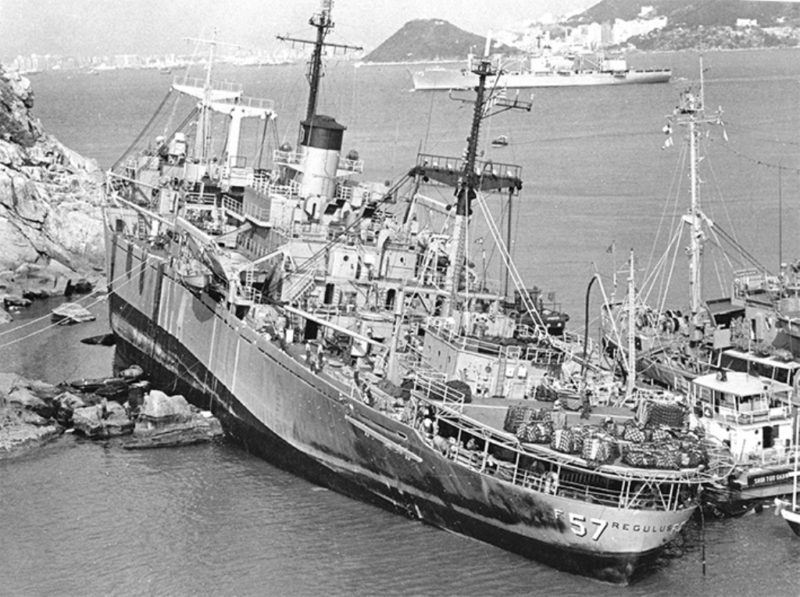 A dramatic image above of the 7,606grt USS Regulus (ex Escanaba Victory) firmly aground on 17th August during Typhoon Rose, at Kau I Chau Island. The grounding caused massive hull damage to the ship and after 3 weeks attempting to salvage her it became obvious it was unviable and she was declared a total loss, subsequently being struck from the USN list. The vessel was progressively demolished in situ.

This weather system formed a tropical depression south east of Guam on 24th July. After a period of uncertainty the storm regenerated on 28th, reaching Typhoon status on 29th. The storm was allocated the name Typhoon Hope, and tracked west north west passing through the Luzon Straits, south of Taiwan, and making landfall only 10 miles to the east of Hong Kong on 2nd August. This was to become the Colony’s most devastating Typhoon since Typhoon Rose in 1971. Winds were recorded in Hong Kong at 205 kmh (125 mph), gusting to 240kmh (150 mph). The Typhoon caused havoc and was responsible for 112 fatalities and 260 injuries. Typhoon Hope quickly weakened over the land while moving westward, but retained its classic formation. Once over the Bay of Bengal the storm re-intensified and moved over India where it finally dissipated. 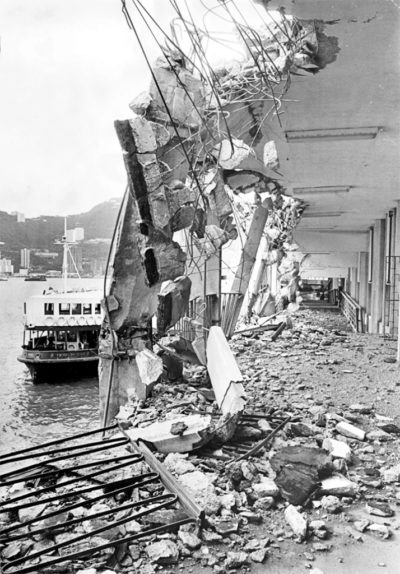 During Typhoon Hope one of Kowloon’s two Star Ferry piers in Tsim Sha Tsui, was seriously damaged when the powerless 10,335grt Greek freighter Argonaut (ex Hazelbank) collided with the piers (above). Reportedly the ship lost its anchors and despite desperate efforts by the crew to avoid the Star Ferry piers, they were unsuccessful in their endeavour. The ship eventually came to rest hard up against Kowloon Public Pier, having sustained serious hull damage on her port side.

Typhoon Ellen was considered the worst typhoon to hit the China Coast since Typhoon Hope in 1979. This Tropical Cyclone formed well out into the Pacific Ocean on 26th August 1983. It strengthened and was upgraded to Typhoon status on 4th September as it tracked west-northwest when it became known as Typhoon Ellen.

Upon making landfall in what is now present-day China, winds gusted to 154 kmh (96 mph) at Stanley. Rainfall totaled 231.8 mm (9.13 in) according to Hong Kong’s Royal Observatory. Twenty-two ships were wrecked, including the 9,539gt freighter Golden Fortune (ex Strathinver, Galway), forcing the rescue of all 40 crew members. Several less serious collisions were reported between ships.

Another casualty was the 225grt barque. Osprey which carried 9 people, 8 of which were lost. The sailing vessel (made famous due to the Jackie Chan movie – Project A) had been at anchor in Repulse Bay on the southern side of Hong Kong Island, when the Typhoon was approaching Hong Kong. Apparently, according to reports, the vessel weighed anchor sometime in the early hours of 9th September, presumably heading into more open water. After that, little is known except she was presumed to have sunk with the loss of 11 lives, 12 miles somewhere to the south of Hong Kong Island. 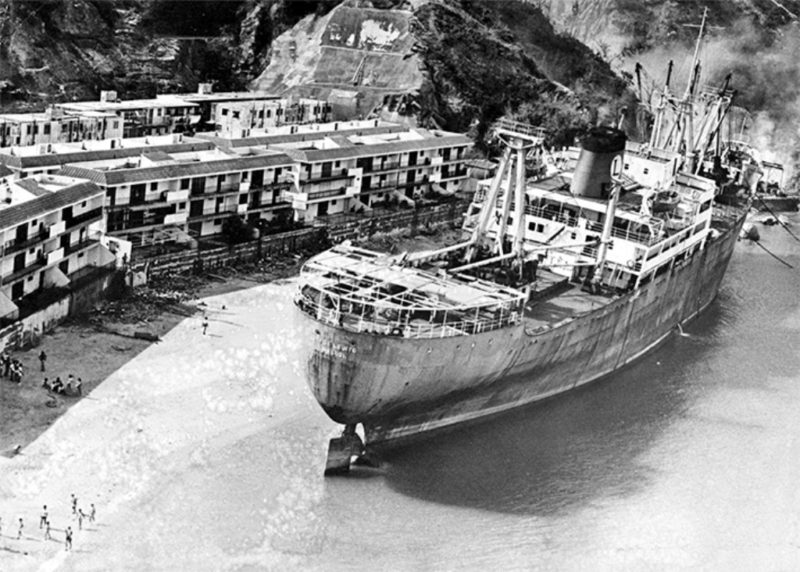 The 6,256grt Cypriot freighter City of Lobito (ex Lagos Palm) well and truly beached on Chung Chau Island as a consequence of Typhoon Ellen (above). The Filipino crew were rescued and cared for by local villagers until the storm had subsided and they were repatriated. The owners of the vessel were reported as having ceased operating soon thereafter.

This short summary by no means includes all the Typhoons experienced during the period covered or marine casualties sustained, but is only a random selection of some that made the headlines. Perhaps this will give an insight into some of the devastation these super storms can create, perhaps nostalgia for others, who may have experienced them.

Over many years the major Hong Kong shipyards obtained much business from ships becoming stranded by Typhoons sustaining damage as a result of grounding in and around Hong Kong’s waters, as well as other vessels salvaged in the South China Sea by the iconic tug Taikoo operated by the China Navigation Company on behalf of the Swire Group’s Taikoo Shipyard.

This feature is covering just some of the victims that have fallen foul of Hong Kong’s Typhoons.