Like many industrial areas, Tyneside must have been an awful place to live in, with so much industry and pollution at the turn of the 19th century. Coal mining, engineering, steel mills, glass, ropes, leather, chemical, lead, pottery factories, salt pans, fish quays, gas works plus numerous other activities. All adding to the unhealthy surroundings, but as the old saying goes ”where there’s muck…”

Tyneside’s wealth had been made from the readily accessible deposits of coal. Conditions endured by generations of miners before mechanisation can only be imagined these days.

The river water was devoid of life, being a dumping ground for coal mining pit slurry, industrial waste etc. it was basically an open sewer. With the population, in the main packed into rows and rows of terraced houses, with insanitary conditions and putrid air quality, public health was poor and infant mortality high.

Employment was never guaranteed, and when the vagaries of trade or stock markets took hold, poverty would not be uncommon.

The area had been transformed by the coming of the industrial revolution, led by enlightened engineers of the era. Stephenson (railways), Armstrong (Armaments and shipbuilding), Parsons (Generators and Turbines), Palmer, Whitworth and Hunter (shipbuilding), Reyrolle (electrical switchgear). For the fourteen miles of river from the bar to a few miles past Newcastle was crammed packed with industry, with no vegetation within a mile on either side of the river banks. Against this backdrop the area’s reputation thrived and grew.

Since 1613 the Newcastle’s city Fathers and Freemen had exacted all dues from trade on the river. Even when sailing ships unloaded their solid ballast onto river banks, prior to loading coal, a tax was imposed. The river was shallow with numerous sand bars and islands, which hindered trade up until the mid 1800s. They were slow to adapt and only changed when the loss of trade threatened their livelihoods. Several factors about mid-century changed the whole landscape.

Firstly the coal mine owners of south Yorkshire found they could supply London with coal via the new railway network faster than the sailing ships trading up and down the East coast. 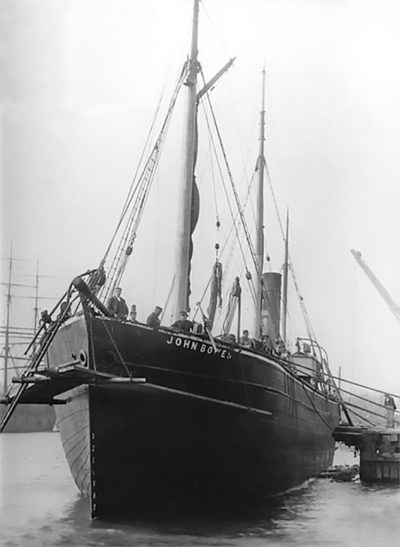 Secondly Charles Palmer’s company had designed a water ballasted steam driven collier John Bowes (above), which would be the game changer.

The Council begrudged the dominance of river trade and river dues etc. to the Commissioners. Up to 1870 they had exacted dues from all coal shipments from the river. In 1901, 458 ships were registered on the river (445,736 net tons) under 141 owners., the largest of which was James Knott’s Prince Line with 41 ships. The majority of the owners were tramp owners or small scale collier operators.

A selection of the shipbuilding scene of 1901 shows that it was going through one of it’s periodical slack times with only 441 merchant ships on the stocks throughout the UK, totalling only 1,300,179 tons. There were almost 80 building berths on the river from trawler size up to 500 feet. Consequently the Company directors of yards were constantly looking of ways of expanding their business. Dr. G.B. Hunter of C. S. Swan Hunter Co. was in Canada looking for more orders for Great Lakes ‘canallers’, and was also looking at starting a shipyard in Halifax, N.S. 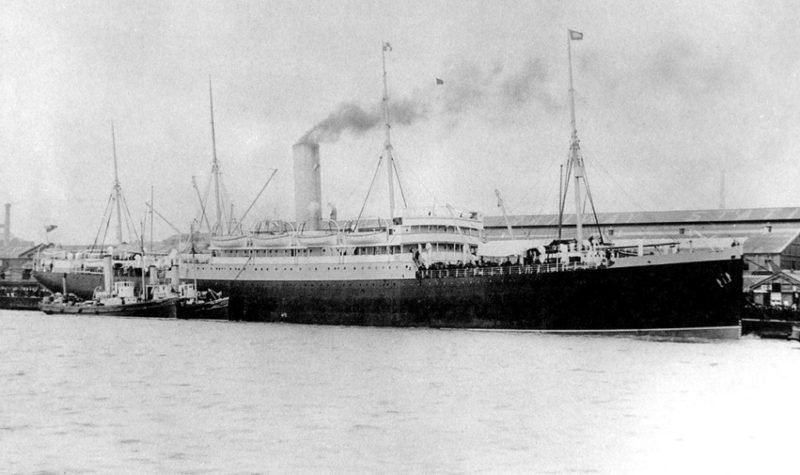 Meanwhile back on the yard, the largest merchant ship built on the river that year the emigrant carrier, Lake Manitoba (above), 9,510grt, for Elder Dempster was completing, with 2 more on order for the same owners. The world’s largest pontoon dock (AFD 1) was in the process of being built at Wallsend, with a lifting capacity of 17,500 tons, for The Admiralty, for use at Bermuda. She was subsequently sold and eventually broken up in Brazil in 1989. 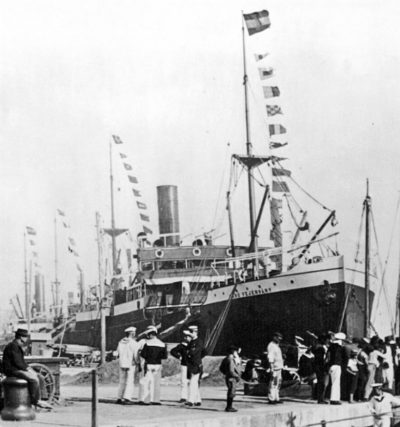 Wigham Richardson at Low Walker were busy with orders for the Baro Fejervary (above) a 3,889 grt freighter Royal Hungarian “Adria” S. N. Co., of Fiume, as well as 4 others for another regular customer D.G. Hansa, who the yard had a long standing business relationship with on cost and reliability.

This month we review The Tyne in 1902 as our Port.