The Story of the Hsu Family’s Shipping Dynasty

Shanghainese shipowners have dominated the Hong Kong shipping industry since the 1950s, shortly after the Chinese Communists took power in the People’s Republic of China, in 1949. Many Shanghainese with shipping interests saw little future under the new regime in China, so relocated their businesses mainly to Hong Kong but also Taiwan. Charles Eddie Hsu was one such shipowner.

Since the 1950s and within this group the Hsu family forged its lineage in the shipping sector and has developed into a multi-generational shipping dynasty. This shipping family can trace its origins back to 1922, when family elder Charles Eddie Hsu, an ambitious businessman with diversified interests ranging from aerated water to ports development, ventured into shipping and bought his first vessel in Shanghai, then went on to establish Eddie Steamship, four years later.

In 1922, Charles bought his first vessel in partnership with fellow Ningpo business mogul, Chu Pao-San and named it Chou Shan (Chusan) after a town in their native Ningbo. In 1926, Charles established Eddie Steamship employing three vessels, SS Yisun, SS Eddie and SS Yitai which were mainly engaged on the Shanghai, Canton, Hong Kong, Amoy, and Swatow service. He also became involved in Port and infrastructure development at Sanmen Bay, but unfortunately, Eddie’s vessels which were engaged in carrying most of the project cargoes were regularly set upon by pirates, whilst on passage to the development location. These debilitating incidents, coupled with the increasing Japanese aggression at the time, caused project investors to withdraw, resulting in significant losses for the family, and the Eddie Group of companies subsequently collapsing in 1935.

The eldest son of Charles, V.K. Eddie Hsu had joined the firm in the 1920s, his focus being on restoring the Eddie Steamship Company to its former glory, following the group’s collapse. The Japanese Navy seized the family’s vessel Kondor in 1941, but after negotiating with the Japanese military, the vessel was released back to the family. Within one week of the end of the War, the Kondor which had been renamed the Tat Fung, resumed servicing the route between Ningpo and Shanghai. When the Communists came to power in 1949, the family relocated their business interests to Hong Kong and Taiwan.

The early 1950s was a buoyant time for shipping companies like Eddie as the Korean War and the post-War reconstruction in Japan and other Asian countries, created a demand for transportation of grains, raw materials, and machinery. By 1959, the year before V.K. parted ways with his brother W.H., and the number of vessels in Eddie’s fleet had increased to eight.

Following the split of V.K. and W.H in 1960, V.K. formed Oak Steamship in 1961, incorporated in Hong Kong, and Sincere Navigation incorporated in Taiwan in 1968 with the support of his family. V.K. was succeeded by his son Steve Hsu Gee-king in 1975. In addition to his sons, V.K. was also aided by his son in law Watson Tang Hua-chien and longstanding lieutenant Fred Tsai.

V.K.’s enterprise progressively expanded Oak Maritime, Continental Mariner and Sincere Navigation while W.H. took over Eddie Steamship and weathered many market upsets, and at one stage turning it into the world’s largest independently owned bulk cargo carrier, before the shipping crisis of the 1980s brought the group to its knees and required bailout from the Taiwanese government.

In the 1980s, the Four Asian Tigers experienced rapid industrialization. Sincere Navigation realizing the Japanese market was limited for further development, decided to expand, and focus more towards the European and American markets, and replace the smaller Handysize bulk carriers in its existing fleet, with larger Panamax, and Capesize, bulk carriers. Due to the rapid transition in its operating strategy and forward thinking by management, the company was successful in surviving the shipping crisis in 1985, which caused such turmoil and the collapse of many other shipowners. The Group concentrates in the transportation of bulk materials such as ore, coal and crude oil. The customers include iron ore suppliers, steel companies and shipping industry operators in domestic and overseas markets. 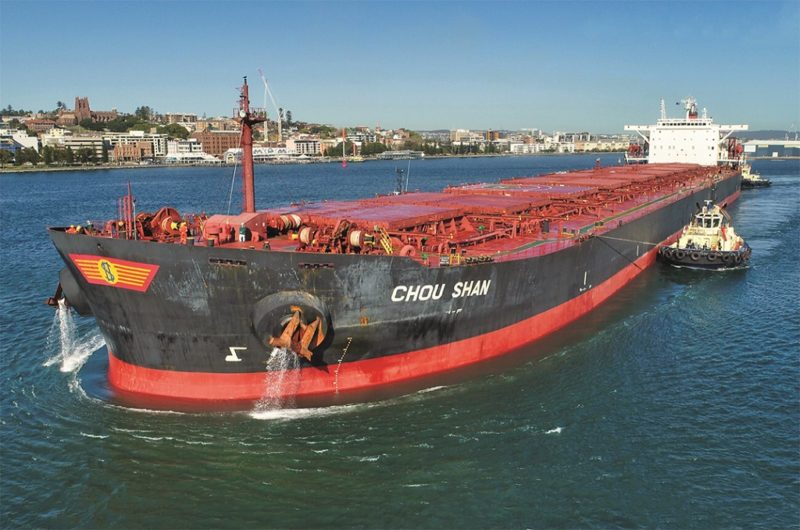 Another ship’s name, that dates back to the fledgling years of Eddie Steamship, is the more recent 2005 built Chou Shan (above) belonging to Sincere Navigation Group. Built in Taiwan, the 175,569 dwt., Capesize, double hulled bulker, has an LOA of 289 meters. 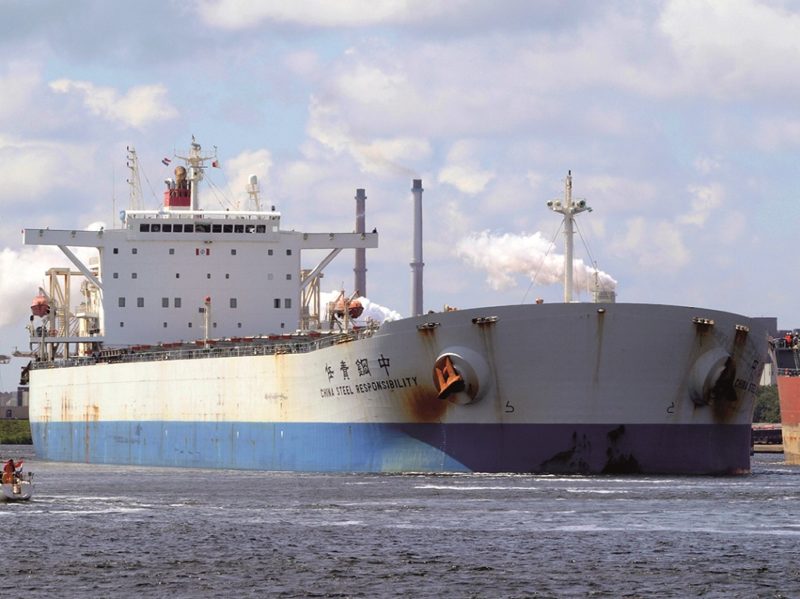 Eddie Steamship also acquired the 2002 built Capesize bulk carriers China Steel Integrity and China Steel Responsibility (above). These vessels are operated under a “Contract of Affreightment” (COA) with Shandong Shipping Asset Management Corporation (SAMC) joint venture, where Eddie Steamship is the owner and operator with SAMC as charterers. Both vessels are close sister vessels of the SAMC Eddie, see next page.

Eddie Steamship is reported to have expanded its fleet with the acquisition of up to 5 Kamsarmax bulk carriers. Kamsarmax are a new innovation in bulk carrier design, larger than Panamax, and which are suitable for berthing at the Port of Kamsar in the Republic of Guinea, which is a major loading terminal for Bauxite, and is restricted to vessels not exceeding 229 meters.

Fourth generation shipping tycoon, Jack Hsu, managing director of the Oak Maritime Group, (Oak Steamship established 1962, and renamed Oak Maritime 1992), assumed control of the company upon his father’s retirement, and has become one of Asia’s best-known names in shipping. The group is also represented through its affiliated offices in Vancouver, Canada, but the principal office of Sincere Navigation Corporation, is a publicly listed company, based in Taiwan. General management is co-ordinated through Oak Maritime’s office in Hong Kong where Jack Hsu is based. The group currently operates a fleet of over 20 modern vessels, predominantly bulkers, with some tankers. The combined fleet has an average age of just 8.2 years. Jack Hsu is also the chair of the Sincere Navigation Group.

The professional operation and progressive growth achieved by this dynamic maritime group, has been successful in retaining the confidence and support of international and institutional investors, as well as those within the global shipping community, which has been instrumental in it receiving numerous accolades from the universal shipping sectors of industry in general.

As of June 2022, their fleet consisted of 14 vessels, including 8 Capesize bulk carriers, 2 Kamsarmax bulk carriers, 1 VLOC carrier and 3 VLCC tankers.

A special feature on the Hsu Family’s Shipping Dynasty