The Pride Of Wales

When the wooden built three masted barque ‘Pride of Wales’ came off the stocks at Borth y Gest in 1868, she really did make an impact in the north Wales shipping fraternity, because with a gross register of 298 tons and the ability to carry 500 tons of cargo, it made her by far the largest vessel that was ever built in the area, with the normal size of the many slate carriers being around the 100 gross ton mark. 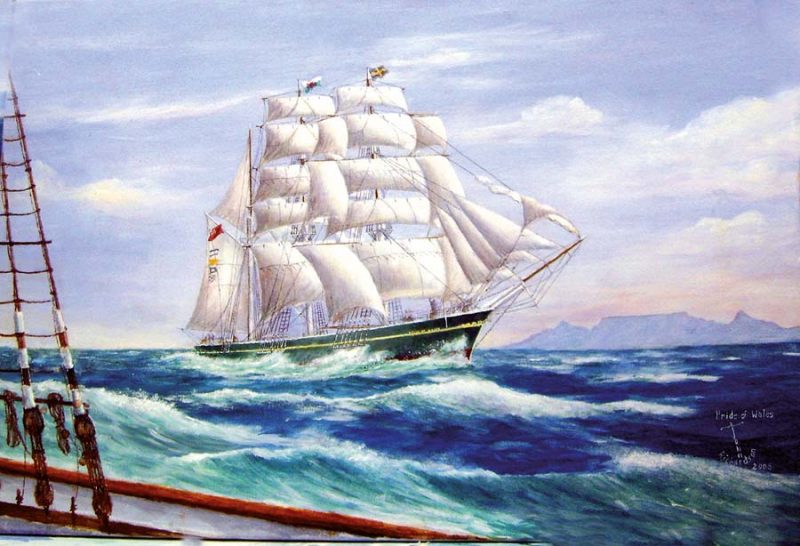 The barque had been designed by Simon Jones for Captain David Morris who was going to be her owner captain. The ship’s waterline length was 125 feet while her overall length which included the bowsprit and jib-boom gave her an extra 40 feet, her beam was 26.5 feet while the depth of hold was 14.5 feet and her international signal code was JQPN. The beautiful figurehead on her stem was a carving of Miss Jenny Morris the captain’s seventeen-year-old daughter, and the girl who’d performed the launching to the cheering crowd. Painted with a bottle green ship’s side and a band of gold around the hull at deck level, she had the usual scroll work on the bow. Once completed she loaded 500 tons of slate and general cargo at Porthmadog for her first trip to India with a crew of twelve, where she’d been chartered for seven years by the Indian government. But when carrying a full cargo the Pride of Wales was a very ‘wet ship’ in heavy weather, and all due to her low freeboard which was a mere three feet at the waist. When the Pride of Wales began on her charter running between Rangoon and Chittagong, the sailors who’d brought her out to India were paid off and replaced by Indians. That move enabled Captain Morris to pay his new crew a fraction of what he would have had to pay his Porthmadog sailors. The only three who completed the seven-year voyage on the Indian coast were the captain, the 1st mate, and John Hughes the carpenter cum bosun. But the Indian sailors were seldom up to scratch and were replaced at frequent intervals by the hard case Porthmadog 1st mate who stood no nonsense and ruled with an iron fist. However, after seven years of trading around the Indian coast, the Pride of Wales returned home to the UK after having paid for her building costs many times over. Captain Morris retired from the sea after that long trip having made more than enough money to retire at a relatively young age, while he still operated the slate carriers Ocean Monarch, Success, Excelsior and Royal Charter.

A short story of this wooden built three masted ship