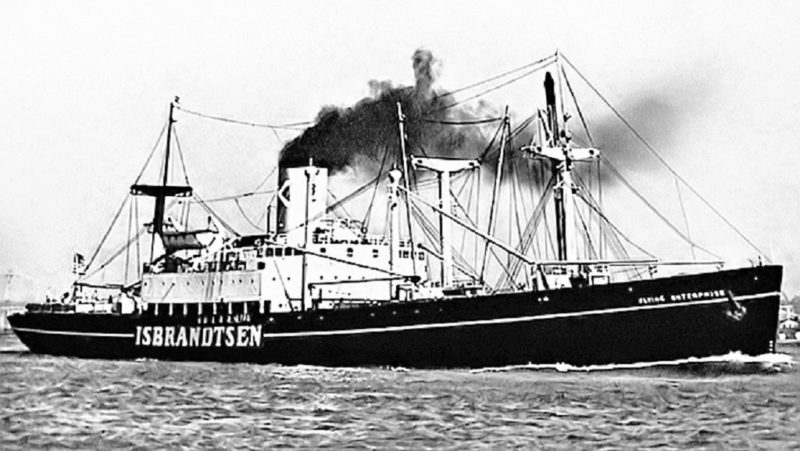 SS Flying Enterprise was a 6,711grt Type C1-B ship which sank in 1952. She was built in 1944 as SS Cape Kumukaki for the United States Maritime Commission for service in World War II. At the conclusion of hostilities, the ship was sold in 1947, and then operated in scheduled service under its new name Flying Enterprise, by Isbrandtsen Lines, mainly on the North Atlantic service. Isbrandtsen Lines, New York, was the leading US-flag shipping company from 1919 to 1977 operating between the U.S. east coast and the Mediterranean, offering both freighter and passenger ship services, until it became insolvent and declared bankrupt, when it was acquired by Farrell Lines of New York, in 1977.

On 21st December 1951, under the command of Henrik Kurt Carlsen, she left Hamburg, Germany bound for the USA. Among her cargo was 1,290 tons of pig iron and 494 tons of coffee, 454 tons of rags, 39 40 tons of peat moss, twelve Volkswagen cars, antiques and antique musical instruments, typewriters, 454 tons of naphthalene as well as ten passengers.

Four days later, on Christmas night, she encountered a storm in the Western Approaches to the English Channel. The stow of pig iron in the cargo holds shifted and collapsed causing the ship to list heavily to port. At some point the motor vehicles also broke loose causing the ship to increase its list even more. The ship’s hull and deck plating cracked just aft of the superstructure. This was a known problem with ships of this design during this era, hence the crew could do little and attempted to continue their voyage. The lifeboats on the Flying Enterprise were either lost or inoperable, due to the heavy list and rough seas.