The Manthos Family And Ship Surgery

The Greek shipowner Antonis (or Anthony) D. Manthos had in 1949 established a business in New York called Admanthos Ship Operating Co. Inc. to operate two newly acquired EC-2 type “Liberty” ships named Tainaron and Aktion. Manthos, whose operations were described by a former seafarer as “small but very good and honest”, had married Thetis Hadjilias, a daughter of the well established shipowner Elias Emmanuel Hadjilias whose other daughter Calliope had married the illustrious Manolis Kulukundis.

Two years earlier, in 1947, the Liberty Ship E.A. Peden had been jointly purchased with Emmanuel P. and Georgios P. Hadjilias. Given the name Sounion, she was sold in 1949 and replaced by the former Frontenac Park, given the name Akron, which was managed from London by Hadjilias and, later, by Mavroleon until sold to Japanese breakers in 1963. The former Fort Perrot, given the name Dorion, was similarly purchased in 1952. She was renamed Apollonia in 1959 but was soon sold to clients of Goulandris before also being scrapped in 1963 as Antonios S. 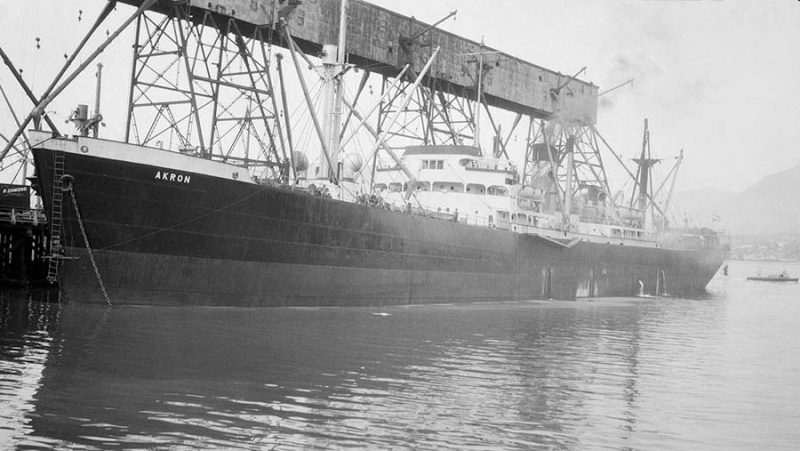 The Manthos family then proceeded to purchase on their own account additional World War II built ships, of which several were modified to increase their cargo capacity at minimum cost. Funnel colours were normally yellow with diagonal blue stripes on a white band although on some later ships the stripes were painted horizontally.

A full list of the modified ships can be seen in the following table:

A pictorial history of a Greek shipping company