Newbuild of the Month 8th December 2020 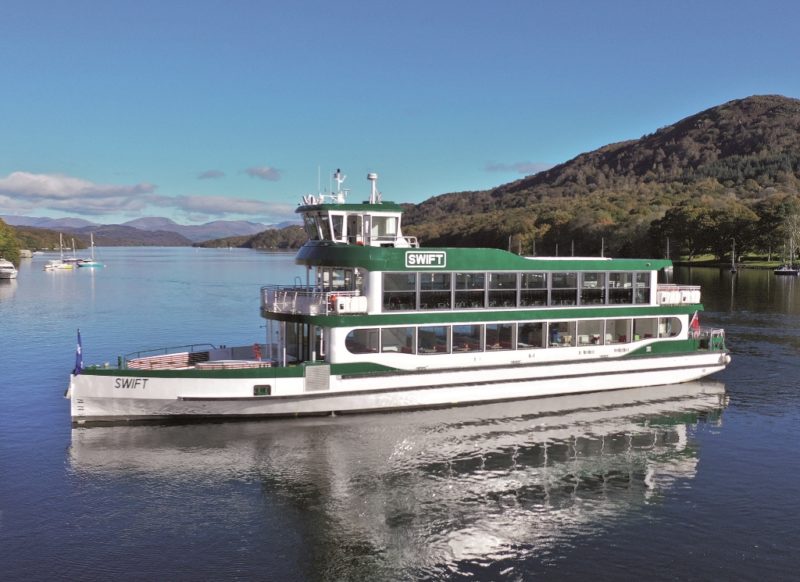 Windermere, England’s largest natural lake, is 10.5 miles (16.8m) long, 1 mile (1.6km) wide at its widest point and has a maximum depth of 200ft (61m). The lake forms part of The Lake District, which is a 912 square mile (2,362km2) region and national park in Cumbria in northwest England. The largest lakes total 16, ranging from Windermere (the largest) to Brotherswater. Lake Windermere is subject to a public right of navigation and in centuries past supported commercial traffic associated with slate and copper mining, timber, wool and fishing. In the early part of the 19th century a sailing packet service operated between Ambleside, Bowness, the Hawkshead Ferry and Newby Bridge. This service connected with the Ulverston to Lancaster Stagecoach at the Swan Hotel at Newby Bridge, and with the Lancaster to Whitehaven Stagecoach at Ambleside.

The first Steamer service began in 1845 using the 200-passenger capacity Lady of the Lake and served until 1865. The second vessel was the 1856-built Lord of the Isles but she succumbed to fire in 1850. In 1847 a second company, the Windermere Iron Steamboat Company, was formed to run cruises in conjunction with the newly opened Kendal to Windermere Railway. In 1849 they launched the Steamer Firefly with a second, the Dragonfly, following in 1850. After competing with each other, the two companies joined forces as the Windermere United Yacht Company in 1858. The Furness Railway Company opened a railway from Lakeside on June 1st 1869. The Furness Railway entered into an agreement with the Windermere United Yacht Company to purchase Steamer shares and in 1872 the Railway Company took sole control. The Steamers continued in Furness Railway ownership until becoming part of the London Midland Scottish Railway (LMS) network in 1923. Vessels came and went and traffic on the lake continued to grow rapidly during the Victorian years. In 1890 the Furness Railway commissioned Forrest & Sons of Wyvenhoe, Essex, to design and build a new Steamer. Originally to be called Swallow, a last-minute change of heart resulted in the vessel being named Tern. Launched in June 1891 with a passenger capacity of 633, the Tern still sails in the fleet today as the flagship of the Windermere fleet. The 121gt and 44.20m (145ft) long vessel was steam powered when built but in 1956 she was converted to diesel power in the form of twin 6-cylinder Cummins diesel engines, two auxiliary generators and a bow thruster. With a crew of 4, the 10-knot vessel can carry 350 passengers nowadays. Ten years later, the Swift, the last of the coal fired Steamers, was commissioned. The largest vessel ever built for service on Windermere, she was launched in 1900, carried 781 passengers and was converted to diesel in 1956 when her boiler burst and British Rail (who took over the service with nationalisation in 1948) installed Glennifer diesel engines for the 1957 season. She was withdrawn in 1981 and scrapped 1998-99 after attempts to preserve her were unsuccessful.

In 1935 the LMS decided to update and improve the Windermere fleet and a new motor vessel, the Teal, was ordered from Vickers Armstrong, of Barrow-in-Furness, and launched at Lakeside on 4th July 1936. The 251gt vessel had capacity for 877 passengers (533 in the present day). The sections of the Teal were transported by rail to Lakeside and assembled. The Teal is 43.20m (142ft) long, has a speed of 10 knots, a crew of 7 and was powered by twin 6-cylinder Kelvin diesel engines and two auxiliary generators. The Teal had new Volvo D13 engines installed during winter 2019-2020. The newbuild was so popular that a sistership, the Swan, was ordered by the LMS, also from Vickers Armstrong. The 251gt/43.20m (142ft) long Swan made her maiden voyage on 24th June 1938 and her passenger capacity nowadays is also 533 plus 7 crewmembers. Power is provided by twin 6-cylinder Cummins diesel engines and two auxiliary generators. Both vessels operate under the Windermere Lake Cruises flag today and have received improvements and new engines in recent years.

Swift is our New Build this month