Newbuild of the Month 8th February 2022 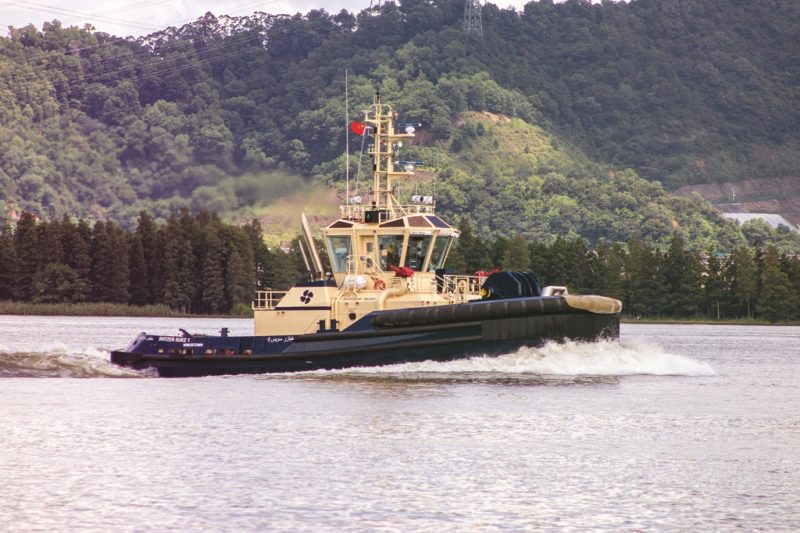 Svitzer Towage is a global brand with a history that began in 1833 when the salvage company Em. Z. Svitzers Bjergningsentreprise was established. The founder, Emil Zeuthen Svitzer, was an entrepreneurial tradesman who saw the potential of establishing a salvage business on the basis of the many unfortunate losses occurring on trade routes to and from Denmark. The company has been part of the Maersk Group since 1979 and boasts over 180 years of running a towage and salvage company with operations all over the world including across Europe, South America, Mexico, U.S.A, Canada, Angola, Australia, Singapore and Oman. Overall, the company has in excess of 430 vessels operating from over 100 locations and around 20 oil terminals across the globe. As of 11th November 2019, Svitzer added the Suez Canal Container Terminal in Port Said, Egypt to its sphere of operations after signing a 10 year agreement with the Suez Canal Authority (SCA) in March of that year to deliver two 70tbp ASD tugs to provide towage services at the Suez Canal Container Terminal (SCCT), which is operated by APMT, in Port Said. The first vessel, the 492gt/2019-built and 32m long Svitzer Port Said 1, an RAstar 3200 CL tug, went on duty on 11th November while the second, the 492gt/2019-built sister vessel Svitzer Port Said 2, arrived in January 2020. These tugs have Schottel SRP 490FP propulsion. The initial volume of 10 tug jobs per vessel per day was expected to double with the jetty extension at Port Said. Svitzer had already been successfully operating in Egypt at the Idku LNG plant since 2005 under a 20-year contract with Egyptian LNG and the Suez contract was Svitzer’s second operation in the country. On 11th August 2021 Svitzer announced that it had extended its current contract with the Suez Canal Authority to include two additional tugs. Whilst the initial tugs had been based at the Mediterranean entrance, Port Said, since 2019, the new vessels would be based at the Red Sea entrance to the canal at Port Suez. The new tugs were newbuilds delivered from the Cheoy Lee Shipyard and manned by all Egyptian crews. Operations were planned to commence in the fourth quarter 2021. The expansion of the SCA tug fleets was at least partially influenced by the extraordinary incident involving the 22,940gt/2018-built and 20,124 TEU capacity containership Ever Given, which ran aground in the Suez Canal on 23rd March 2021 whilst en-route from Tanjung Pelepas in Malaysia to Rotterdam in The Netherlands. The ship was stuck fast and remained in situ for 6 days before salvage crews freed her on 29th March 2021. The incident highlighted a number of areas for improvement including the need for additional support vessels for canal traffic.

The new tugs earmarked for the Port Suez contract were the first examples of the all-new RAstar 2800-CL ASD escort tug, designed by Robert Allan Ltd. of Canada and built by Cheoy Lee Shipyards, located 45 miles west of Hong Kong, China, a company with over 100 years and five generations of uninterrupted shipbuilding. The shipyard can trace its routes back to the 1870s although it was in 1936 that the family business moved to the then British colony of Hong Kong, marking the start of the Cheoy Lee Shipyards that we know today. Initially specialising in mechanising sail powered cargo vessels during World War II, by the mid-1950s Cheoy Lee had diversified into the production of teak sailing and motor yachts, mostly built for export to America. Come the 1960s, this now burgeoning pleasure craft division of Cheoy Lee accounted for 90% of all production from the yard. Expansion of the shipyard was required, and it was at this time that the Penny’s Bay site in Hong Kong was established. As a pioneer in the development of fibreglass as a boat building material, Cheoy Lee recognised the savings in weight, greater strength and longevity that this new material offered.

Svitzer Towage is a global brand with a history that began in 1833 here we introduce their latest newbuild.