A Century of Trading in South East Asia

The history of the Straits Steamship Co. Ltd. was closely tied up with that of its managers, Walter Mansfield and Company, the family having been originally shipbuilders in Teignmouth in Devon. George Mansfield was taken into partnership in 1872 by his uncle Walter Mansfield, the latter person having arrived in Singapore with his wife and an agency contract in his pocket on 29th May 1868 to begin the Alfred Holt agency in the port for the Ocean Steam Ship Company (Blue Funnel Line). An enterprising Dutchman, Theodore Cornelius Bogaardt, also joined Mansfield and Company as a partner in 1872, a year before the death of Walter Mansfield in England. The firm was now headed by George Mansfield and Theodore Cornelius Bogaardt, and between them they laid the basis for a new period of expansion. George became the Senior Partner, but Bogaardt was much more dynamic and took over the leadership of the company when George Mansfield retired on 28th August 1883 and sailed home on the Holt steamer Agamemnon.

Formation Of The Company

The Straits Steamship Company Ltd. was set up in Singapore on 20th January 1890 by Theodore Cornelius Bogaardt in conjunction with the powerful Straits Chinese Tan family of Malacca with a initial capital of 500,000 Singapore dollars. The initial subscribers were Theodore Cornelius Bogaardt, Tan Jiak Kim (1859-1917), a merchant and political activist and head of the Kim Seng Company, Tan Keok Saik, and Lee Cheng Yan, a merchant and philanthropist born in Malacca in 1841 and who died in Singapore on 18th May 1911, and also A.P. Adams, D.J. Mathens and J. Burkinshaw, the latter trio all being directors of Mansfield and Company.

Theodore Cornelius Bogaardt was as influential as John Swire in changing the direction in which the Ocean Steam Ship Company (Blue Funnel Line) would expand, with Singapore as the centre of activity, with the Straits Steamship Co. Ltd. acting as a feeder to the big deep sea ships of Blue Funnel Line from the smaller ports of Malaya into Singapore. The Kim Seng Company provided three of the first five ships of the Straits Steamship Company, which at first participated in the tin ore trades from the mining regions of the Western Malay States to the smelting works of the newly established Straits Trading Company Ltd. of 1887 in Singapore. The Straits Trading Company Ltd. was a very successful company in the smelting and exporting of over 55% of the tin mined from the Straits Settlements. It was established by James Sword, a Scottish businessman, and Herman Muhlinghaus with a capital of 150,000 Singapore dollars to mine the rich tin deposits of the Kinta Valley and the Klang Valley. The tin ore mines were most productive in the Kinta Valley area, and the ore was shipped from the small ports of Port Weld and Telok Anson, midway between Penang and Port Swettenham, into Singapore. The coolie Chinese labourers had arrived to work in these mines on Blue Funnel ships from Southern China to Singapore.

Port Weld was named after Frederick Weld, a Governor of Larut, Matang and Selama district in Perak. The tin ore mineral line from the mines in the interior at Taiping to the shipment port of Port Weld has now been dismantled, and the port is today called Kuala Sepetang. Telok Anson lies upstream in the Perak river with the current name of the port and town as Teluk Intan. During the British protectorate era, the name was changed to Telok Anson, in honour of the Lieut. Governor of Penang, Sir Archibald Edward Harbord Anson, who drew up the plan for the modern town in 1882, which today is the third largest town in the State of Perak. Services from Singapore also ran to Klang and Port Swettenham in Selangor and Port Dickson in Negri Sembilan. 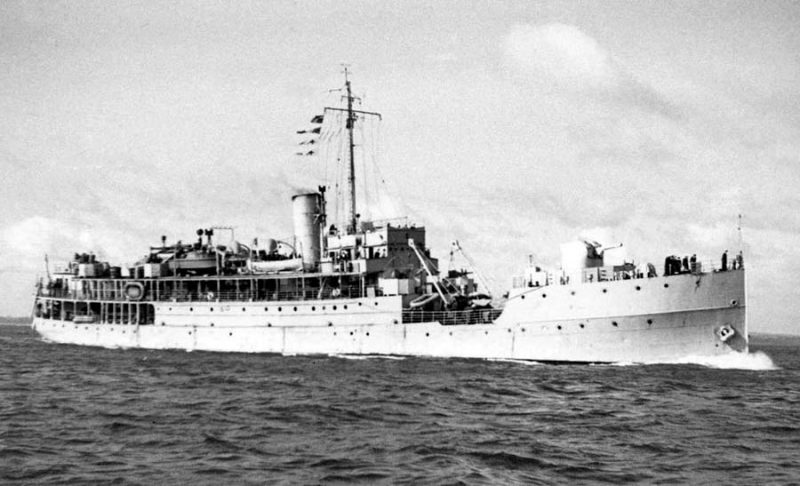 The 839grt Larut was built in 1927 by Hall Russell & Co. at Aberdeen. On 23rd January 1942 she was bombed by Japanese aircraft and set on fire. She was beached at Sabang, Sumatra but burnt out. Her crew were saved.In 1892, Mansfield and Company took over the management of Straits Steamship Company Ltd., with Theodore Cornelius Bogaardt then in control of both companies. A year later, Blue Funnel Line also set up its own feeder line, the East Indian Ocean Steam Shipping Company, with Mansfield and Company also managing the line. Theodore Cornelius Bogaardt left Mansfield and Company in 1895, and the link between both Holts and Mansfield and Company with the Straits Steamship Co. Ltd. was severed until World War I. The Straits Steamship Company Ltd. played a considerable part in the exploitation of tin and other minerals of Western Malaya, running a twice weekly service from Penang to Singapore, and a regular ore shipment trade from Port Weld and Telok Anson to Singapore. The ore trade carried on for over twenty five years, and was replaced by the rubber trade after the end of World War I, by which time the Straits Steamship Company Ltd. had major links to Malacca, Port Swettenham, Penang and the smaller ports of Western Malaya, as well as to Sabah, Sarawak, Sumatra, Siam, Burma and ports on both coasts of the Malayan peninsula.

A Century of Trading in South East Asia