These memoirs of my Uncle, who was born on a Kintyre hill farm in 1900, were kindly lent to me by his daughter Patricia Semple. Upon reading them it became apparent to me that the story he told was of a breed of men now largely forgotten, but who performed important work at sea until technology finally overtook them. These memoirs extend to nearly four hundred pages, and with the permission of his daughter, I have selected and edited some highlights of his most interesting story.

First trips 1917, the Scandinavian and the Celtic

My first ship was the Scandinavian, a moderately large passenger vessel of the type running on the North Atlantic at the beginning of the century. She belonged to the now defunct Allan Line of Glasgow, and was at that time in the process of being taken over by the new owners, the Canadian Pacific Railway Co. They called their shipping line the Canadian Pacific Ocean Services at that time and did not rename the Allan Line ships until after the 1914-1918 war. I joined the Scandinavian in Liverpool early in May of 1917, at which time the submarine campaign was at its height, and, although I do not remember many details of the vessel, I loved her from the start.

She had one extraordinary feature which I never saw again in the many ships on which I served subsequently. Her main deck was flush fore and aft and the navigating officers’ accommodation was on an island forward of the bridge and under the foremast, while the Wireless Room was perched on top of this structure. In an Atlantic gale the whole house was like a half-tide rock and, as the berths of the two Radio Officers were deep down in the 2nd Class passenger accommodation, it was quite a hair raising experience going on watch at 2.00 A.M. on a stormy night in the blackout. It was a situation which could not arise today because safety regulations now call for the Radio Officer to be housed near his place of work. On the Scandinavian it is most unlikely that the off-watch Radio Officer would ever have been able to reach the wireless room in a bad emergency. However, those things worried me not at all in those far-off days. I loved the ship and everything about her.

For a homesick and very young Scotsman there was a preponderance of good fellow country men aboard and, as I remember, the navigating officers were all Scots including the Captain, a God-like being to whom I never had the opportunity of speaking. The Captain’s name was Reith, and the Chief Officer was a short, rather dumpy and pompous looking man whose name escapes me, but whose nickname was Napoleon and whom he resembled to an extraordinary degree. The First Officer was Mr. Beaton, and I also recall the newly promoted from cadet to 4th Officer McGirr, a rather ‘gallus’ type Glasgow lad with a heart of gold. We were good friends from the start and I have never forgotten him although I never saw him again after l9l7. 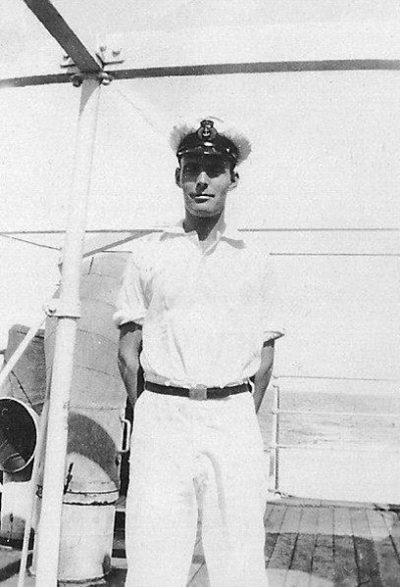 There were some extraordinary types in the catering department which is always the biggest on passenger ships, The Chief Steward, old Archie Stewart, well known on the North Atlantic and a man who always reminded me of a Turkish pasha when he sat in his room dispensing rough justice on his minions and issuing orders. The Chief Steward was a man of great power on any passenger ship but, for some strange reason, without officer status. Then there was Monkhouse the 2nd Steward and Bob Hunter the chief storekeeper, both great humorists and jolly good chaps. Hunter was especially kind to me and I used to visit his vast food storeroom in the bowels of the ship whenever I had a chance. While Bob worked at his accounts I never got tired of exploring this veritable Aladdin’s cave. Bob Hunter had married the daughter of the then Chief Engineer of the Campbeltown steamer ‘Davaar’, and this made a bond between us. Between voyages I spent some happy hours at their home in Egremont on the Wallasey side of the Mersey.

The Chief Engineer, old Jimmy Walker, was also a Scot and very typical of his profession, a dour but thoroughly likeable man. Of the other engineers on board I have literally no recollection at all and I find it hard to explain this. Of course, engineers on those old time Atlantic liners were housed in what was known as the ‘working alleyway’, a kind shipboard slum at the top of the engine room. They were seldom seen during the sea passage as they had their own messroom and spent many hours a day clad in boiler suits. It is a fact that in the old coal burning passenger steamers, the more junior engineers were little better than stokehole slave drivers. Together with their slaves, the old time Liverpool type firemen and trimmers, they worked desperately hard to maintain the necessary head of steam developed by multiple marine boilers needed to allow the ship to keep her schedule, and when off watch spent most of their time asleep. This hardy breed has long since disappeared from the scene, but the memory of the hard fighting, hard drinking and equally hard working men from Scotland Road vividly remains. In the case of the liner navigating officers, also of the more senior engineers during the era prior to 1920, it seems to me that they were invariably men in middle age or older. Promotion was slow in those days of individualistic shipping companies each with its own traditions and orderly seniority lists. Command or promotion to Chief Engineer was something that came with age and experience, and if a man could put in ten years as Captain before retirement he was lucky. But with it all there was a deep impression of professionalism and integrity. They were dedicated men who were sadly exploited by their employers.

The Scandinavian was built in 1898 as the New England for the Dominion Line and later, in l905, had been taken over by the White Star Line and named Romanic. She ran for the new owners until 1912 when the transfer to the Allan Line took place, after which she was given her final name. A good looking but rather slow (15 knots) vessel her career was quite successful considering the fact that she ran the gauntlet of the North Atlantic throughout the First War without incident. Oddly enough, despite her slowness, she was given some very important tasks at this time. During my two voyages on her, she was full each way on the Liverpool to Montreal run with passengers and Canadian troops. She was not requisitioned but was several times given an auxiliary cruiser escort to herself and did not sail in convoy in my time. In the vicinity of Cape Race in May 1917 gunnery practice by our 6 inch gun was carried out on an iceberg without much damage being done. The Returning Canadian troops were mostly invalided-out men and were an interesting bunch.

Radio silence was maintained throughout the voyage except for some relaxation in the St Lawrence River above Fame Point. It was a thrill for me to watch for the first time a radio-telegram being transmitted by a one and a half Kw fixed spark transmitter, the noise was appalling but very satisfying to our itchy fingers. We had been compelled during the eight days passage from Liverpool to listen only and maintain a log book recording all important signals heard. In those days a lot of them were distress calls from torpedoed ships or requests for assistance from ships being ‘gunned’. One such call I remember to this day – “SOS SOS SOS 45.40N 55.27W Kumara gunned”. Terse, and very much to the point.

We listened enviously to neutral passenger ships belonging to Norway, Holland, Spain and some others using their transmitters normally as it was still peace time with them. One in particular was the Bergensfjord of the Norwegian Line which always seemed to have a full file of telegrams for the various Canadian and American land stations. The Spanish liners also were very much in evidence, particularly the Alfonso XIII, which had the most powerful set built for ships by the Marconi Company, a 5KW Rotary Spark transmitter which could be heard over incredibly long distances on the pretty poor receivers extant at that time. Ships then had mostly three letter call signs and I can still remember those two. Bergensfjord was LFB and Alfonso XIII was EDT. Call signs then had some bearing on the ownership of a vessel besides, by the first letter, being identified nationally. The Scandinavian was MNC which indicated her previous White Star ownership. A ‘C’ ending meant a White Star ship, while an ‘A’ ending was usual in the case of the Cunard Line. This became very impractical later on as more and more ships were fitted with radio and changes of ownership anyway made the rule valueless. British ships then had mainly the initial letters of M (Marconi) and G (GPO) and this selected prefix still stands.