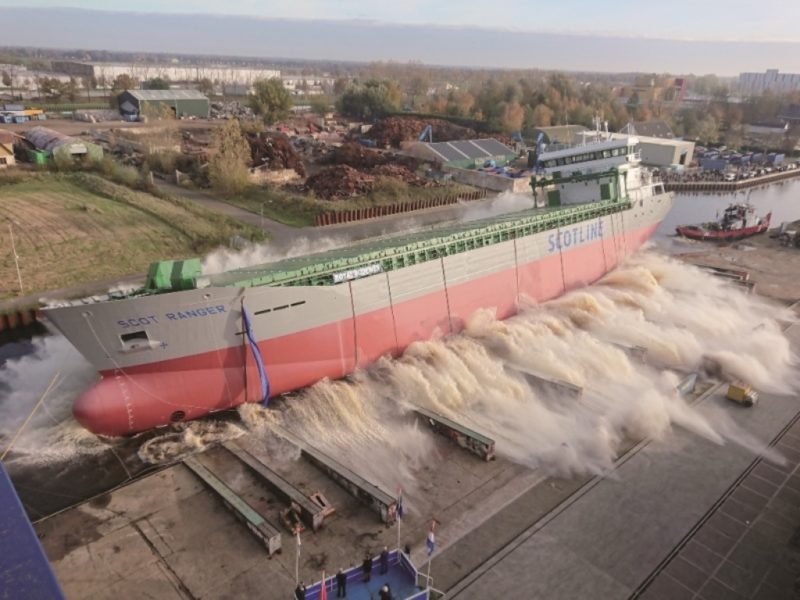 Scotline is a shipping company that has its roots planted firmly in the U.K with the present day registered offices being in Romford, Essex and an operational hub in neighbouring Kent at Rochester. The company celebrated 40 years of trading in 2019 and can trace its origins back to 1979. The first cargo was carried that same year under the Scotline trading name, a shipment of logs between Inverness and Bremen in Germany, which became a regular route, before this changed to Inverness-Varberg (Sweden). In 1981 the company chartered its first vessel and set up the Scotline liner service, transporting sawn timber from Varberg to Inverness as a joint venture with Scotlog Sales. In the present day the liner service has established trade routes between Denmark, Germany, Ireland, Norway, Sweden, the Baltic States and the U.K. The initial service employed charter vessels until 1994 when Scotline Marine Holdings Ltd., a close business partner, purchased its first vessel, the Hohebank, which was time chartered by Scotline. The original operation at Inverness was expanded to additional sites at Whitstable in Kent and Goole in Yorkshire, before moving to Gunness in Yorkshire and Rochester in Kent during 1994. The 10-acre site at Rochester, on the banks of the River Medway, is owned by Scotline Terminal (Medway) Ltd. and was much larger than the facility used at Whitstable. The site was developed to include office facilities, 2 large warehouses, secure storage for equipment and a base for an engineering team to meet the requirements of the ships and terminals. By 2010 the space at the Rochester site had been completely exhausted and more was required. A second terminal was sought and acquired in January 2011 by Scotline Terminal (Transit) Ltd., adding a further 14 acres to the storage space available to Scotline in Rochester. The company’s head office was originally based in Holborn, London, before moving to Romford where it still is today. The fleet has seen considerable investment in the past five years with the 2,571gt/2017-built Scot Navigator, a GS Eco Freighter 3700 design, being followed by the announcement on 1st February 2018 that a contact had been signed with the Royal Bodewes Group BV in Holland to build the 3,450gt/2018-built Scot Carrier in the November of that year. This vessel was followed by 3,457gt/2019-built sistership Scot Explorer. A further newbuild was ordered on 28th July 2019 in the form of the 3,457gt/2021-built Scot Ranger, also of the Bodewes Trader 4800 design. Scotline was pleased to have a Scot Ranger in the fleet again, with her previous namesake being the 2,260gt/1997-built Scot Ranger that was disposed of in 2019 after 22 years of service. She continues to work as the Rova for the Rova Shipping Company in Germany and was Scotline’s first newbuild vessel ever commissioned, as well as being the last ship built at Yorkshire Dry Dock in Hull.

Scotline's , Scot Ranger is our featured ship this month.