Newbuild of the Month 9th August 2022 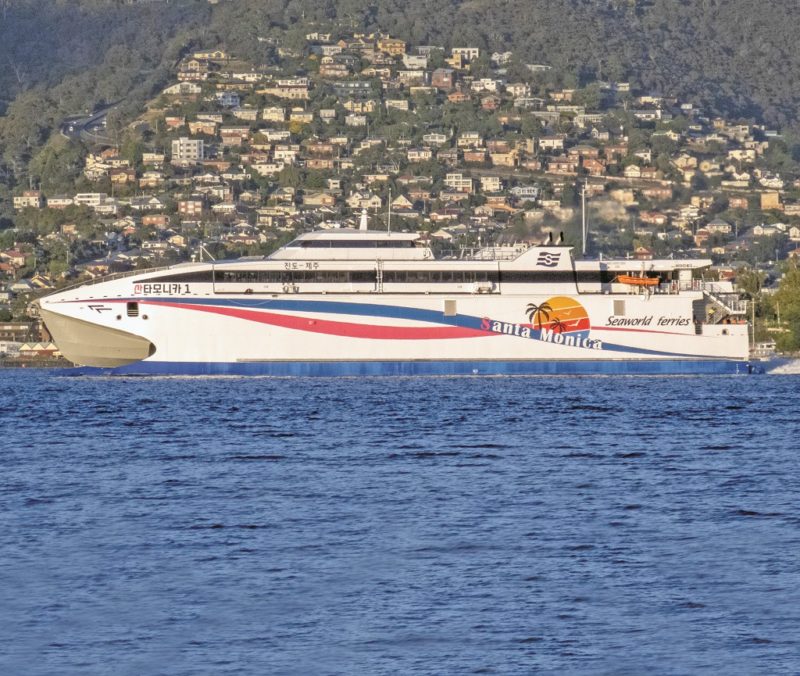 Large fast vehicle ferries have seen a renaissance in recent years as major ferry operators renew or expand their fleets. On the whole, the robust, twin-hulled designs have shone through with Austal and Incat taking the Lion’s share of orders. The unmistakable profile of the Seacat wave piercing vehicle and passenger carrying catamarans is carried through into the 21st century examples. The legacy of the Seacat family is scattered around the world, with the highest concentration still being in the northern hemisphere. All owe their existence to the rather humble beginnings of International Catamarans Pty Ltd. (Incat) in 1983. Incat conceived the Wave Piercing fast ferry design after much research and development. Hull 013 became the 8.70m prototype, named Little Devil, with trials taking place in 1984. The results encouraged Incat to proceed with a 28m Wave Piercing Catamaran, the Spirit of Victoria (Hull 016), which entered commercial operation in 1985. The Tassie Devil 2001 (Hull 017) was launched in December 1986 and Incat’s first foray into the UK market involved two passenger catamarans built for Sealink British Ferries’ Portsmouth-Ryde cross-Solent ferry service in 1986 (The Our Lady Patricia and Our Lady Pamela which survived until 2006/09 respectively). The current range of Wave Piercing Catamarans mirror the characteristics of various early craft. The mainstream design of vehicle carrying wave piercer burst onto the scene in 1990 when the 74m Seacat, the Hoverspeed Great Britain (HGB-Hull 025), was launched on 28th January 1990. On her delivery voyage from Australia to Britain the Hoverspeed Great Britain surpassed the Hales Trophy/Blue Riband transatlantic crossing record by 3 hours 14 minutes. Since then, the 91m Buquebus owned Catalonia (Hull 047 and now Golden Fast Ferries’ Super Express, 5,902gt/built 1998) captured this honour with a crossing of three days, 9 hours and 40 minutes whilst the current holder is another Incat vessel, the 5,619gt/1998 built and 91m Skane Jet (ex-Fjord Cat of Fjord Line).

Santa Monica is our featured ship this month.