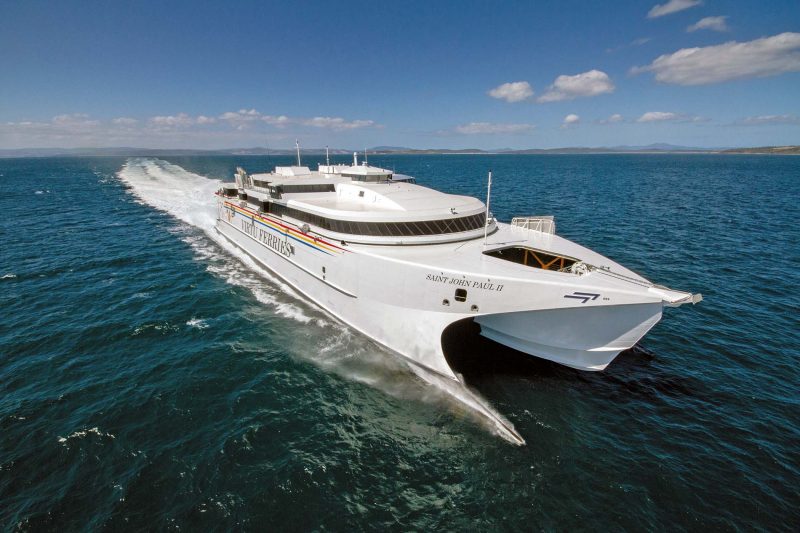 The unmistakable profile of the Seacat wave piercing vehicle and passenger carrying catamarans that are scattered around the globe nowadays owe their existence to the rather humble beginnings of the Incat Group. In 1983 International Catamarans Pty Ltd. (Incat) conceived the Wave Piercing fast ferry design after much research and development. Hull 013 became the 8.7m prototype, named Little Devil, with trials taking place in 1984. The results encouraged Incat to proceed with a 28 metre Wave Piercing Catamaran, Spirit of Victoria (Hull 016), which entered commercial operation in 1985. The Tassie Devil 2001 (Hull 017) was launched in December 1986 and Incat’s first foray into the UK market involved two passenger catamarans built for Sealink British Ferries’ Portsmouth-Ryde cross-solent ferry service in 1986 (The Our Lady Patricia and Our Lady Pamela). The current range of Wave Piercing Catamarans still reflects the characteristics of various early craft. The mainstream design of vehicle carrying wavepiercer burst onto the scene in 1990 when the 74 metre Seacat, the Hoverspeed Great Britain (HGB – Hull 025), was launched on 28th January 1990. On her delivery voyage from Australia to Britain the Hoverspeed Great Britain smashed the Hales Trophy/Blue Riband transatlantic crossing record by three hours and 14 minutes. Since then the 91m Buquebus owned Catalonia (Hull 047 and now Golden Fast Ferries’ Golden Express – 5,902gt/built 1998) captured this honour with a crossing of three days, nine hours and 40 minutes whilst the current holder is another Incat vessel, the 5,619gt/1998 built and 91 metre Fjord Cat that has operated across the Skagerrak for Fjord Line. The HGB’s service debut was not the smoothest but these ground-breaking craft quickly carved a niche for themselves and became commonplace at various ports around Europe and further afield. The craft grew in size and in 2007 the “Evolution One12” 112 metre design arrived, the largest so far, with the first example being delivered to Japanese operator Higashi Nihon Ferry. By 2008 Incat had built almost 40% of the world’s high-speed vehicle-passenger ferry fleet over 50 metres in length. In deadweight terms Incat has built around 60% of the world’s high-speed ferries with capacity over 750 tonnes. While the ferries initially revolutionised transport links around the United Kingdom, Incat-built ships now operate elsewhere, including North and South America, Australasia, the Mediterranean and Asia.

This month's newbuild is a fast ferry owned by Virtu Ferries