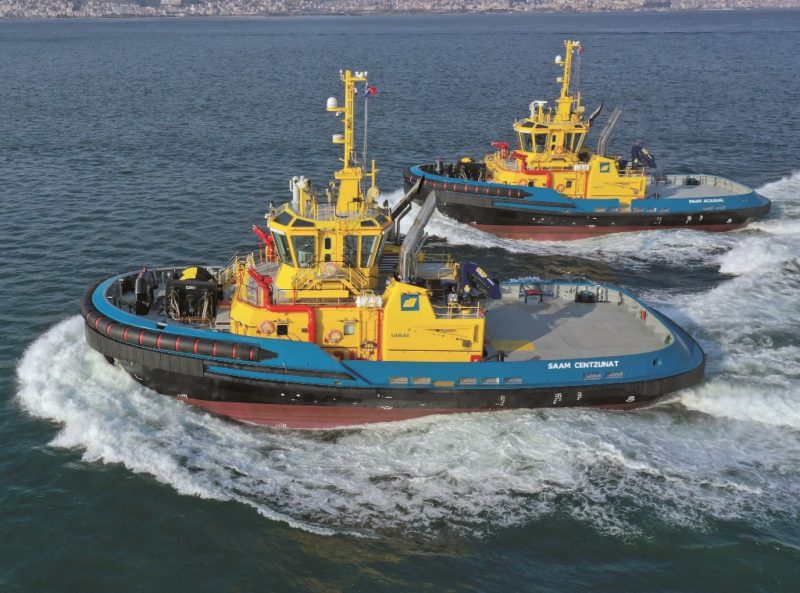 SAAM Towage (Sociedad Matriz SAAM) was founded in 1961 in Chile, South America, and has grown to become a major player in the towage industry across the Americas with operational bases in Brazil, Canada, Chile, Columba, Costa Rica, Ecuador, El Salvador, Guatemala, Honduras, Mexico, Panama, Peru and Uruguay. The company operates a fleet of over 170 tugs, 35 of which have been delivered in the past 7-8 years. SAAM has involvement with the marine sectors of towage, oil and gas, salvage assistance and special services (barges and civil construction). In 2014 SAAM commenced a joint operation with SMIT Boskalis before buying the latter’s share of this operation five years later. The common trading name of SAAM Towage was launched on 30th October 2019, reflecting the adoption of a single common operating model, name and image for SAAM’s nine towage operations. The company’s growth continued with the acquisition of 70% of Intertug in 2021, entering the Colombian market, strengthening its position in the Caribbean and strengthening its regional leadership. In April 2021, SAAM Towage announced the launch of its operations in Peru and commenced operations in El Salvador, providing services to the Energía del Pacífico LNG terminal. This terminal supplies the new Acajutla LNG power station, a 378mW natural gas-fired power project constructed at the Port of Acajutla, Sonsonate, El Salvador. This is fuelled via a permanently moored floating storage and regasification unit (FSRU), an underground natural gas pipeline, a 44km-long 230kV transmission line, and three substations. Energía del Pacífico (EDP), a joint venture between the US-based power generation company Invenergy and the El Salvador-based Quantum Energy, is the owner and developer of the project. Estimated to cost £702 million, the Acajutla LNG power project represents the largest energy infrastructure investment in the history of El Salvador. Work began in 2019 with commissioning in 2021 and the site is one of the first LNG-fired power projects in Central America. Some Readers may be interested to learn that the new gas-fired power station consists of no fewer than 19 Wartsila 18V50SG/ 500rpm/18.3mW engines, each fitted with heat recovery boilers and a combined steam cycle system generating an additional 26mW using the exhaust gases from the engines. These power units are designed to operate with low-pressure gas, while the plant will be equipped with Wartsila’s Dry Flexicycle technology to avoid the use of cooling water. The entire facility will increase the electricity production capacity of El Salvador by 23% and help reduce the country’s dependence on diesel and heavy fuel oil for power generation. The LNG is delivered to Acajutla via 165,000m3 capacity gas carriers 32 times per year, which will be transferred to the aforementioned 174,000m3 FSRU for storage and re-gasification.

Our Newbuild this month features these two new tugs.