Newbuild of the Month 13th September 2022 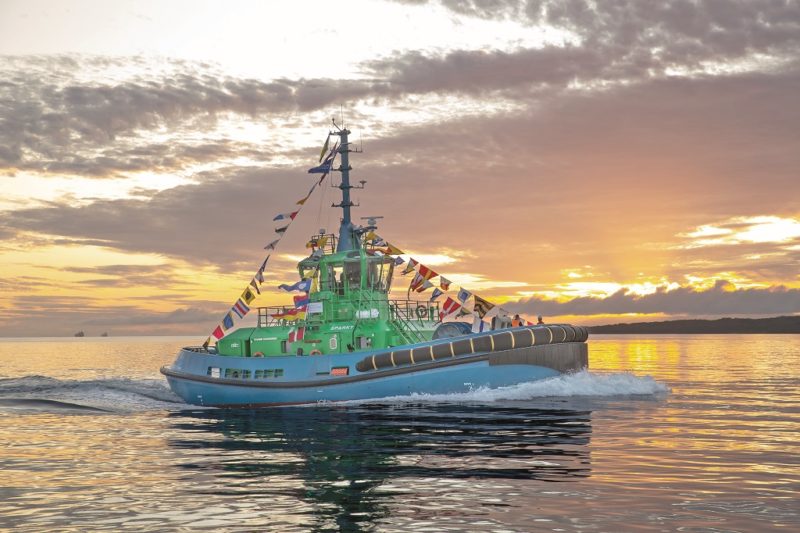 Various sectors of the maritime industry have evolved hybrid propulsion systems in recent years for use in a multitude of vessels. Some of these sectors, particularly the passenger and vehicle ferry categories, have gone one step further to develop all-electric powered vessels with (and sometimes without) conventional diesel engines as an emergency back-up. One of the most notable such newbuilds to date is the E-Ferry Ellen in Denmark. Perhaps a less likely sector of the shipping industry to rapidly develop an all-electric option was that of ocean-going ship handling/towage. However, as far back as 29th July 2019 Damen Shipbuilding signed a contract with Ports of Auckland, New Zealand, for a fully electric RSD-E Tug 2513 with full ship-handling capabilities and a bollard pull of 70 tonnes. The vessel was said to complete the green cycle of energy in the port with its unrivalled performance in sustainability. Damen’s RSD Tug 2513, unveiled in 2018, could already boast extreme green credentials, being fuel-efficient and IMO Tier III ready.

When the Ports of Auckland were looking to go a step further in terms of sustainable performance, they turned to Damen. The port had set itself the goal of being zero-emission by 2040 so a zero-emission option for the port tugs was one of the first steps, with the intention of making such a purchase initially explored in 2016. The port already had an example of the highly successful Damen ASD Tug 2411, and knew that Damen had been building hybrid tugs, so turning to the Dutch Shipbuilder was a logical choice for developing a fully electric model. Damen looked into the request and saw that it was technically possible. The next step was to consider the feasibility of full electrical operation from a business perspective. Data from the operational performance of the port’s ASD Tug 2411 allowed the battery requirements to be calculated for the proposed RSD-E Tug 2513.

Like Damen, Ports of Auckland and New Zealand as a nation are committed to sustainability. Already around 40% of primary energy generated in the country comes from renewable sources, including 80% of electricity, which comes primarily from hydropower and geothermal power. Damen Group was involved in every part of the design and build process for this pioneering project, the world’s first all-electric ship handling tug. The work included equipment such as the charging station, which is based on technology that has already demonstrated its credentials in the automotive industry. A simple system, it features four cables on the vessel being connected to the station. Once connected, the 1.5MW charger takes just two hours to fully charge RSD-E Tug 2513. The tug design also has high levels of redundancy in its power systems. The electrical system has built-in redundancy, with the batteries arranged in strings so if one battery in a string fails, the others simply carry on the work.

To ensure absolute safety, the electric tug also features a pair of 1,000KW generator sets, which provide enough power for the tug to operate at a bollard pull of 40 tonnes in the event of an electrical system failure, or if the vessel needs to operate beyond the battery capacity. However, the propulsion system is not hybrid. In normal operation, the generators are not used as the vessel and her battery system has been designed to meet the port’s normal operational needs.

After partnering with Echandia in 2018 to build the world’s first electric passenger ferry fleet in Copenhagen, Damen Shipyards again collaborated with the company in 2020 in creating another landmark of maritime transportation, the electric tug. The vessel is anticipated to have a 25-year life span and will save approximately 465 tonnes of CO2 in diesel emissions annually. The newbuild is powered by the Echandia E-TUG energy storage system (ESS) which is based on the Toshiba SCiBTM LTO cells. With their exceptional safety rating, supercharging capability, long life span and relatively light weight, the LTO battery racks, 80 of which are installed on the tug (representing 2,784 KWH of power), will allow the specified 70 tonne bollard pull on a single charge with two ships being handled before a recharge is needed.

The Dorset to New Zealand