The short lived Egyptian Mail Steamship Co. Ltd. of London ordered two large Edwardian passenger liners with accommodation for over one thousand passengers for the Marseille to Alexandria route for delivery during 1907/08. However, the directors had made the classic mistake of overestimating the potential demand on this route, given that it was operated by the firmly established Messageries Maritimes and the Peninsular & Oriental Steam Navigation Co. Ltd. as well as the Khedivial Mail Steamship Line, later majority owned by P. & O. Passengers used these services to avoid the rough sea passage across the Bay of Biscay to the Mediterranean. The powerful P. & O. connected to Marseille from London using its own dedicated company trains, timed to the arrival of their steamers. This overwhelmingly strong competition proved too much for the Egyptian Mail Steamship Co. Ltd. and their service was unprofitable. Heliopolis and Cairo had been launched by the Fairfield yard at Govan in May and July 1907, and completed in November 1907 and February, 1908. The Egyptian Mail Steamship Co. Ltd. was in liquidation by 1909 and Heliopolis and Cairo were put up for sale at Marseille. They had been built at enormous expense and cost a staggering £350,000 each, high for that time, making an investment of £700,000.

Heliopolis and Cairo were of 545 feet overall length, beam of 60.2 feet and draft of 26.8 feet, with a fo’c’stle of length 70 feet and Bridge Deck of length 308 feet. They had three passenger decks, plus three more decks and a shelter deck with freeboard below the weather deck. They had accommodation for 344 in First Class, 210 in Second Class, and 560 in Third Class giving a total of 1,114. The accommodation and excellent public rooms were lit by electricity throughout, and with hulls with strong transverse web frames, plenty of refrigerated food stores, and the latest safety equipment, they were well designed twin funnelled liners. On trials, both had achieved well over twenty knots, with Capt. G. Gregory taking charge of both liners on their maiden voyages. They flew the Red Duster as they were registered at London. 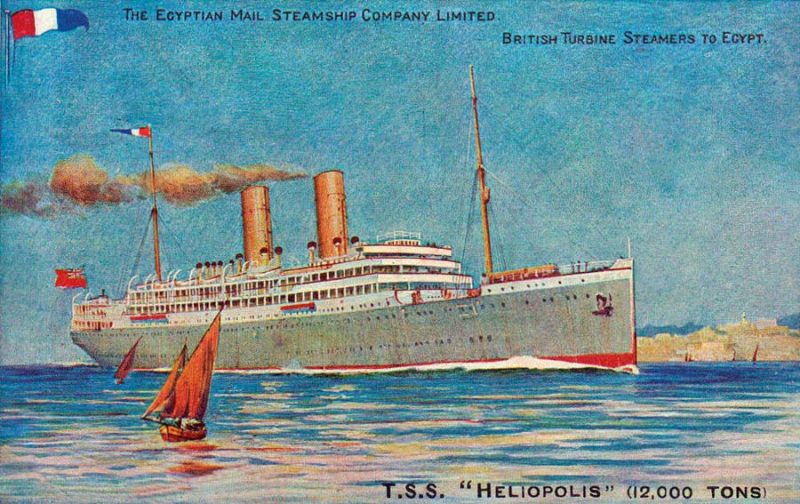 They had triple screws with three steam turbines fed with steam from four double ended and four single ended boilers at a pressure of 180 pounds to give a high service speed of 19 knots on coal consumption of 170 tonnes per day. This triple screw arrangement was used to avoid cavitation problems, and had been employed for the first time on the North Atlantic on two turbine powered liners, Victorian and Virginian of Allan Line of 10,750 grt and completed in 1905. Sir Charles Algernon Parsons had demonstrated the use of three propellers to avoid cavitation and the consequent decrease in speed in April, 1896, when his pioneer Turbinia was fitted with three parallel flow axial turbines with three propellers on each of three shafts and achieved 35 knots. He followed this a year later at the Spithead Naval Review with a sensational run through the line of warships at the same speed, thus immediately convincing their Lordships of the Admiralty of the power of the steam turbine. Turbinia is permanently on display in the Main Hall of the Discovery Museum in Newcastle upon Tyne.

A history of these two ships