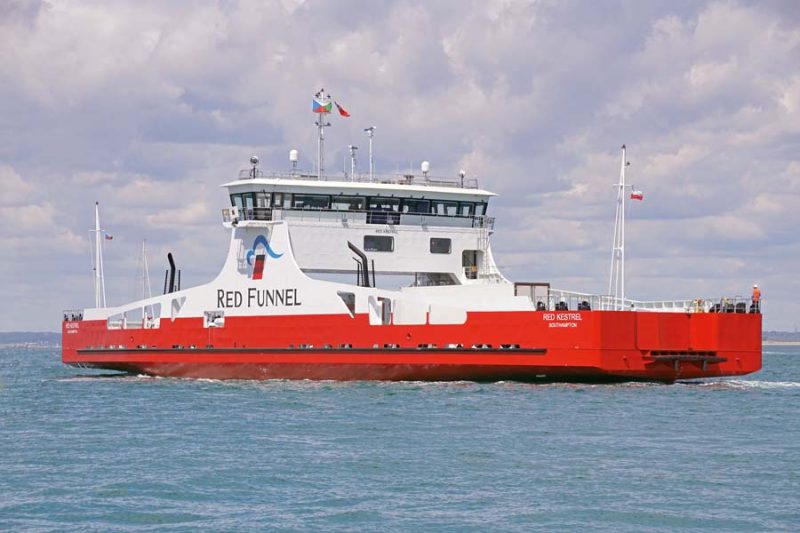 The Isle of Wight enjoys an intensive cross-Solent ferry service operated by three companies, Wightlink, Hovertravel and Red Funnel. The April 2019 fleets consisted of nine vehicle ferries, five passenger catamarans and two hovercraft with all but four of these being built in the 2000s following huge investment by the companies. The Southampton Isle of Wight and South of England Royal Mail Steam Packet Company Limited (better known as Red Funnel Ferries Limited) was formed in 1861 and proudly states that it is the original operator to the Isle of Wight and has a distinguished and colourful history that now spans 158 years. In a first for the cross-Solent routes, Red Funnel took delivery of the very first freight-only ferry in April 2019. Their third UK built ferry since 2016, the RoRo ferry received the name Red Kestrel.

The overall history of the company goes further back, to 1820, when George Ward and William Fitzhugh of Cowes established the Isle of Wight Royal Mail Steam Packet Company, the first steamer service between Cowes and Southampton. Steam Packet Services also started serving Ryde, Southsea and Portsmouth Harbour. Excursion Services were also a mainstay activity during those Victorian and Edwardian summers with daily trips along the South Coast and across the channel to France. In 1826 Southampton introduced its own ferry service to Cowes, known as the Isle of Wight Steam Packet Company. A third rival on the route then persuaded the two established operators to join forces. A new Board of Directors was formed and on 10th September 1861 the Southampton Isle of Wight and South of England Royal Mail Steam Packet Co. Ltd. was born. In the 1900s, the growing interest in travel provided the Company with an important side-line, namely the provision of tendering services to the great passenger liners. Many such ships would anchor in Cowes Roads and use these steamers for alighting passengers and transferring all kinds of cargo. In 1885 the Company expanded into tug ownership and Red Funnel Towage was formed, remaining operational until 2002 when sold. Red Funnel retains the company’s original and famous house flag as derived in 1861 from the names of the first four steamers in the newly merged fleet, the Sapphire, Emerald, Ruby and Pearl. The colours are explained as: Blue to the mast, Green to fly, Red on deck, White on high. Whilst Red Funnel’s primary cross-Solent services have always operated between Southampton and East/West Cowes, this potted history focusses exclusively on the vehicle ferry services that serve East Cowes, for reasons that should be clear. The route’s first vehicle ferry was the 473gt/1942 built Norris Castle (II), converted from the WW2 landing craft LCT 828 (LCT standing for Landing Craft Tank). She operated 1947-1962.

The company’s first purpose-built vehicle ferry arrived in 1959 in the form of the John I. Thornycroft built Carisbrooke Castle (672gt/58.27m/673 pax/25 cars) and was withdrawn in 1974. The 736gt/58.27m/673 pax/25 car capacity Osborne Castle arrived in 1962, replacing the Norris Castle (II) and served the route until 1978. The 786gt/58.21m/500 pax/25 car capacity Cowes Castle was delivered in 1965 and the 734gt/58.29m/250 pax/25 car capacity Norris Castle (III) followed in 1968. The first three ferries were single-ended (with sideloading possible at West Cowes) and offered passenger accommodation on a single level above, covering around half of the vehicle deck. The last vessel built had around 50% less superstructure (likewise passenger capacity) to give her a larger open vehicle deck and thus a greater freight capacity.

In 1975 the Cowes Castle and Norris Castle were sent to Belgium in turn for lengthening and conversion to drive-through operation. The 67m long ships could then each carry 900 passengers and 30 cars at a speed of 12-14 knots. The respective gross tonnage figures post-conversion were 912gt and 922gt. The Norris Castle was always recognisable after refit as her funnel moved to the aft end of the superstructure whilst the Cowes Castle’s was further forward. The base of the old funnel on both ships was converted into an upper level sun deck. In 1974 the company’s first purpose-built double-ended vehicle ferry was delivered in the form of the 1,858gt/73.8m long Netley Castle, built at Wallsend and completed at Woolston. She could carry 86 cars and 900 passengers. The vessel remained a one-off and was sold to Jaroldlinja of Croatia in 1997 following withdrawal in 1996. She continues there in service as the Sis.

Twenty years then passed until the next new tonnage with the Clyde-built Red Falcon and Red Osprey arriving in the March and October of 1994. These replaced the Cowes Castle and Norris Castle, which were sold to Jaroldlinja. The new 2,881gt Raptor Class ferries were 82.4m long with capacity for 895 passengers and 140 cars. A slightly larger sister (extended passenger lounge and raised wheelhouse to compensate visibility-wise, plus an upper deck bar lounge), the Red Eagle, was delivered in 1996. The ferries were dubbed the Raptor Class as they’re named after Birds of Prey (Raptors). In 2003-2004 the ‘Falcon and ‘Osprey went to Gdansk, Poland, in turn to be lengthened and to receive a new fixed upper car deck. The project increased the length to 93.22m, the car capacity to 220 and the gross tonnage to 3,953gt. To maintain the 3-ship service during the rebuilds, the 1975 built Norwegian fjord ferry Nordhordland was purchased from HSD and renamed Bergen Castle. To travel on her was a unique experience and she served the route during the conversion of the Red Falcon/Osprey only and was then sold. The Red Eagle followed suit in 2005 to complete the project. The 12-knot trio also received modified propulsion packages. The passenger spaces on the ships were not increased so new enclosed A-Deck lounges were fitted, with AA-Deck sundecks above, on the Red Falcon/Osprey in 2014/2015. The ‘Eagle was completed in 2018 with her works including a club-class style (and highly recommended!) Signature Lounge, which had also been retrofitted on her sisterships by this time.

As a solution to easing capacity on the vehicle ferries, on 14th February 2018 the Isle of Wight’s first purpose-built freight-only ferry was ordered from Cammell Laird of Birkenhead, Merseyside. No UK yard could cater for Wightlink’s 2018 newbuild Victoria of Wight (Turkish yard Cemre built her) so the order on home soil came as a crowd pleaser, as had the building of the Red Jet 6 and Red Jet 7 at Wight Shipyard, East Cowes. Cammell Laird is one of the most famous names in British industry and was founded in 1828 by Scottish entrepreneur William Laird and his son John. The company has built more than 1350 ships including many famous and innovative vessels. The company’s Birkenhead site expands across 130 acres and includes four dry docks, a large modular construction hall and extensive covered workshops. It is also at the centre of a marine and engineering cluster with easy access to support services, classification societies and port state authorities. Many notable Royal Navy ships have come from Cammell Laird with merchant navy products including the 1838 built Robert F. Stockton (the first screw steamer to cross the Atlantic), the Cunard White Star passenger liner Mauretania and smaller ferries such as Western Ferries’ 2013 built Sound of Seil and Sound of Soay. This duo formed the basis for the Red Kestrel’s design but differ in terms of length (49.95m), beam (15.01m) and also have a lower gross tonnage of 497gt. The River Clyde sisters offer capacity for 40 cars/194 lanemetres and 220 passengers and are powered by two Cummins QSK19M diesel engines. Some of Red Funnel’s Masters and a technical team visited the Western Ferries vessels on the River Clyde prior to the Red Kestrel being launched. Whilst the Western Ferries vessels have passenger capacity for their mixed traffic role at deck level, and a small offset wheelhouse over the car deck, the Red Kestrel boasts a full width accommodation area above the freight deck and a full-size bridge atop that. As mentioned above, the fourth ferry for the East Cowes service was seen as a way of making more space available on the passenger/vehicle ferries for tourist traffic, as well as moving drop-trailer traffic to the dedicated ship whenever possible. The latter factor will also help turnarounds at peak times as Tugmaster movements can delay embarkation to the main deck. However, passenger seating on the 3 ferries is already at a premium on a full mixed-traffic sailing during inclement weather, with extra bench seating etc. added where possible over the past couple of years. Red Funnel’s new CEO has hinted that a review of the passenger spaces will be necessary to ensure the optimum balance is achieved. Hopefully the Signature Class lounge will remain as, in the Writer’s experienced opinion, the £10 upgrade per crossing is worth every penny, especially on peak sailings.

Red Funnel's Red Kestrel is the focus of our newbuild feature