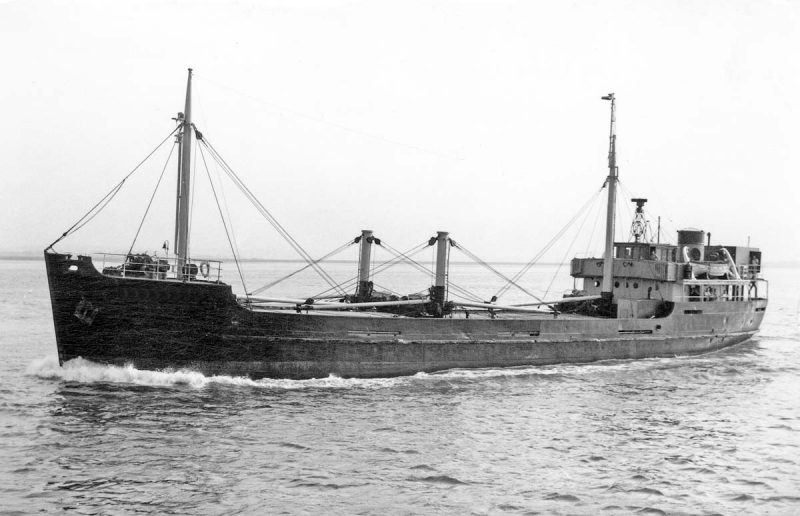 January’s unknown ship brought many replies most of whom identified her as the Glamis.

Alan Blackwood writes: This month’s ‘unknown’ is the 555grt single deck coaster Glamis, the second of a pair of essentially (at build) identical vessels constructed by the Caledon SB & E Co. Ltd. of Dundee to the order of the Dundee, Perth & London Shipping Company, the latter’s first motorships and equipped with suitably comprehensive cargo handling equipment to accommodate the service requirements of their owner’s all cargo liner operations between Dundee and London.

Glamis was completed during October 1936 and powered by a 4 cylinder, 500 bhp two stroke single acting Polar Atlas type oil engine constructed by British Auxiliaries Ltd., of Glasgow to return a service speed of 10 knots. Her overall dimensions were 176’ x 30’2” x 14’ (depth moulded), with a maximum draught of 12’2”.

She was requisitioned as an Admiralty supply vessel on the 5th of September 1939 when initially engaged in sailings between NW English ports to Northern Ireland until June 1942, when reassigned to operations between Leith or Methil to Scapa Flow and from August to December 1943 returned to the Irish Sea for sailings between Liverpool and the Isle of Man. During April 1944 she commenced operations preparatory to the Allied Invasion of Europe, in time undertaking regular sailings between the Solent and Normandy and later to Antwerp and the Scheldt. She was returned to her owners during July 1945.

With the changeable nature of the UK coastal trade, Glamis was during the 1952/3 period engaged in coastal tramping interspersed occasionally with her owner’s liner services, but by 1954 was found to be no longer capable of attaining service speeds to suit scheduled liner departures and arrivals, particularly at London to meet suitable Thames tidal requirements. As a consequence she was sold out of the fleet during January 1961 and acquired by Fotis C. Georgopoulis & Co. of Piraeus, when renamed Romilya for operations on Black and Red Sea services. Thereafter she endured a number of ownership changes including in 1963 to Stavros Kypriaos & Partners and whilst retaining PoR, renamed Agios Spyridonas, in 1966 and without change of name or PoR to E. Chaviaras & K. Diamontopoulos, in 1968 without change of name or PoR to Prodromos Varvakis & Co., in 1975 to Libra Ltd. of Thessaloniki when renamed Zygos 1, in 1976 to the Cypraea Stolida Shipping Co. Ltd. of Limassol when renamed Stolida and finally, during 1980 whilst retaining her Cypriot flag, sold to the Union Progress Shipping Ltd. of Nicosia when renamed Rola, with retention of her PoR of Limassol.

Thereafter nothing appears known of her ongoing career, but it is recorded that she was deleted from the register during 1995.

John Jordan writes: This coaster is a Dundee, Perth, and London Shipping Line vessel by the name of Glamis. She was built in 1936 by Caledon Shipbuilding & Engineering Co. Ltd. of Dundee.

She was renamed Romylia in 1961 when sold to Greek owners F.C. Georgopoulos. In 1963 sold to another Greek owner and renamed Agios Spyridonas. In 1967 she had a new owner then in 1969 another owner with name change to Zygosi. In 1975 she was renamed Solida and owner was Cypraea Stolida. Finally in 1976 her name changed to Rola followed by more ownerships. She was deleted from the register in 1995 after 59 years but her exact fate is unknown.

Mike Goadby writes: This month’s unknown ship is the 555grt M/V Glamis, built in 1936 by the Caledon Shipbuilding Co. Ltd., Dundee, for the Dundee, Perth & London Shipping Co. Ltd. She was powered by a 4cyl 2.S.C.S.A. by British Auxiliaries Ltd. Glasgow, 550bhp. The vessel was sold in 1960 to Fotis C. Georopoulus, Piraeus, Greece and renamed Romylia. She changed ownership with various Greek and Cypriot companies given the names, 1963 Agios Spyridonas, 1975 Zygos, 1976 Stolida, 1980 Rola. She was deleted from Lloyds Register in 1995. Her sister ship was Arbroath (III), built in 1935 and broken up in 1972.

She was sold in January 1961 to Fotis C. Georgopoulos, Piraeus renaed Romylia.

She served 25 years with Dundee, Perth and London.

Laurance Ward writes: I believe this ship to be the Glamis, completed in October 1936 for the Dundee, Perth and London Shipping Company Ltd., being built by the Caledon Shipbuilding & Engineering Co. Ltd., of Dundee.

She was removed from Lloyd’s Register in 1995.

Dave Haxell writes: I believe the mystery ship featured in the January issue is the Glamis (call sign GZDN) of the Dundee, Perth and London Shipping Company. Registered in Dundee she was built at the Caledon Shipbuilding and Engineering yard (yard number 359) in Dundee and was launched on the 2nd September 1936 and completed the next month. She was powered by a 4cyl 2SA British Polar engine which gave her a speed of 10 knots. Her gross tonnage was 561, net tonnage 280 and a summer deadweight declared by the owners to be 600 tons. This equated to a draught of 10ft 6ins. Having a length overall of 176ft and a beam of 30ft 2in she was employed on the company’s network of services from the Tay to London, Newcastle, Hull & Southampton and on occasions to Northern France. She carried many products of Dundee including Jute items and comics from the D.C. Thompson organisation including the Dandy, Beano & Topper as well as cases of Marmalade. In 1961 she was sold to Georgopoulos of Piraeus and renamed Romylia, she then had a variety of names including Agios Spyidonas in 1963, Zygos 1 in 1975, Stolida in 1976 and finally Rola in 1980. She was deleted from the register in 1995. The company ceased shipowning in 1967 after their last ship was sold falling victim as many coasting companies did to the rise of efficient road transport.

W.S. Sinclair writes: The unknown ship is the D.P.L. ship Glamis, built in 1936 by the Caledon yard in Dundee. She was sold in 1961 and traded under many names and companies.

David J. Smith writes: I think the January Unknown Ship is the coaster Glamis of Dundee, Perth and London Shipping Co. Ltd. She was built at the Dundee yard of caledon Shipbuilding and Engineering Co. Ltd and completed in 1936. Glamis was taken up from trade for war service and employed as a supply ship. In 1961 she was purchases by Greek owners and renamed Romylia. A succession of Greek and Cypriot owners and renamings followed. I am unaware of her fate, but she was believed to be still in service in 1980.