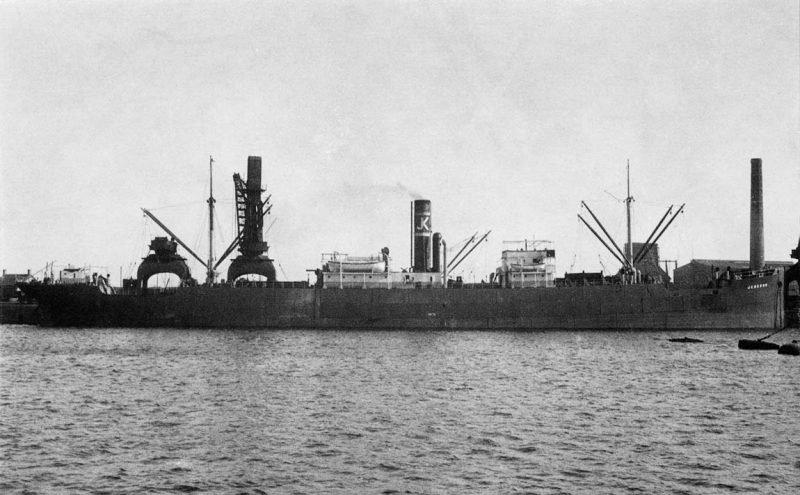 September’s unknown ship brought only a few replies all of whom identified her as the Jameson.

John Jordan writes: This ship is the 1924 Built SS Jameson, 3,585 grt of dimensions of 360ft x 50ft x 23ft 6 inches. She was built in the Dobson Walker Yard at Newcastle for Kaye Steam Navigation Company and would have traded to South America. She was sold on in 1934 to Coolham SS Co. Ltd. and renamed Joyous.

In April 1940 after colliding with an Argentinian tanker, she was beached in the Parana river on a voyage from Sante Fe via Buenos Aires to Liverpool and was described as wrecked.

Mike Goadby writes: This month’s unknown ship is the 3,585grt cargo vessel Jameson, built in 1924 by William Dobson & Co. Ltd. at their Walker yard in Newcastle-upon-Tyne. She was built for the Kaye Steam Navigation Co. Ltd., London, ON 147610 yard NO 221, dimensions of 360x50x23.6ft draft, fitted with a T3cyl engine built by North Eastern Marine at Wallsend, developing 370nhp. In 1934 she was transferred to Coolham SS Co. Ltd., (same managers) and renamed Joyous. On the 14th April 1940 she sank after being in collision with the Argentine tanker Ingenerio-Luis-A-Huergo in the Parana river whilst on passage from B.A. to Liverpool with a cargo of maize.

Alan Blackwood writes: This month’s ‘unknown’ is the 3,585 grt single screw tramp Jameson, completed during April 1924 by W. Dobson & Co. at their Walker Yard on the Tyne, delivered and as identified by her funnel markings, registered to the ownership of the Kaye Steam Navigation Co. Ltd., London, (Kaye, Son & Co. Ltd., Managers).

Following the Kaye, Son & Co. Ltd establishment during 1934 of a new subsidiary company, the Coolham Steamship Co. Ltd. of London, the vessel was renamed Joyous and her registered ownership transferred to this new entity, whilst retaining her original management.

On 14th April 1940 whilst proceeding downriver on the River Parana at commencement of a voyage from Santa Fe to Liverpool via Buenos Aires with a cargo of maize, she collided with the Buenos Aires registered 3,327 grt 1917 built Ingeniero Luis A. Huergo, was duly beached but later sank without loss of life in some 7 metres of water.

In 1934 Transferred to Coolham S.S. Co. Ltd. (same managers) and renamed Joyous. On 14th April 1940 she was lost in a collision on the River Parana on passage from Santa Fe to River Mersey with a cargo of maize.