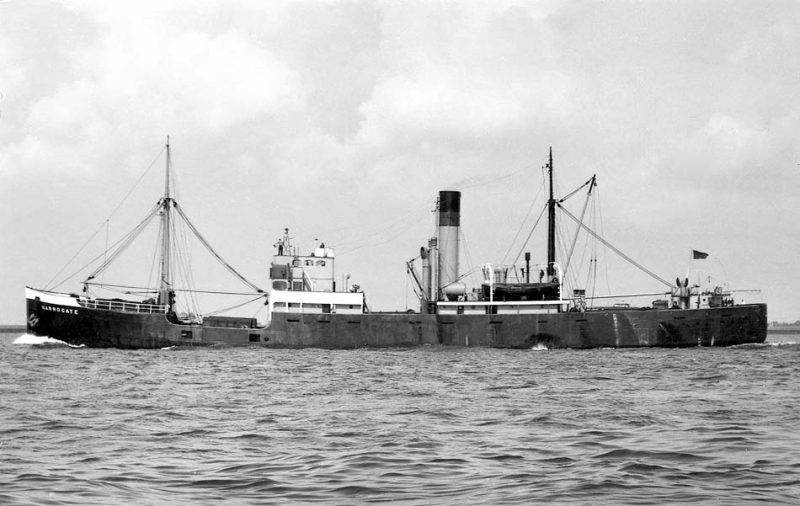 November’s unknown ship brought several replies most of whom identified her as the Harrogate.

John Chitty writes: This month’s unknown ship is the single screw steamship Harrogate built by Ramage & Ferguson, Leith at their Victoria shipyard as yard number 260 in 1925.

Built for the Wilson’s & North Eastern Railway Shipping Co. Ltd. of Hull for their Hull to Hamburg service, although she also covered the Hull to Rotterdam or Hull to Antwerp routes as required.

In 1935 management was transferred to Associated Humber Lines and with remained with them until broken up in 1958 in Holland.

Alan Blackwood writes: This month’s unknown is the 1,113grt single screw steamer Harrogate, completed during January 1925 by Ramage and Ferguson Ltd. at Leith for the joint ownership of Wilsons and the North Eastern Railway Shipping Co. Ltd. and registered at Hull for short sea operations on UK – Continental services. She was essentially an update of the similarly sized steamer Selby completed at Aberdeen for the same owners some two years earlier. With overall dimensions of 250’10” x 34′ x 14’2″ (moulded depth) and a max. summer draught of 15’10.5″, Harrogate’s propulsion consisted of a 257nhp triple expansion engine fed by steam from 2 x single ended boilers at a pressure of 225psi., the whole constructed by her builders to return a speed of 12 knots.

During 1935 her management was transferred to Associated Humber Lines of Hull. On 12th September 1941 whilst on passage from London to Dundee with general cargo and in a position off Southwold, Suffolk, she was attacked by enemy aircraft, sustaining some damage due to proximity of an exploding bomb rather than by direct hit.

At war’s end she returned to her owners’ Continental services under the continued management of AHL. Following acquisition by the British Transport Commission during 1957 of Wilsons’ interests in the joint operation with Harrogate together with sister Selby, sailings for the pair continued until May 1958 only, when both were sold for scrapping, with Harrogate purchased by N.V. Vereenigde Utrechtsche Ijzerhandel of Utrecht, arriving at Rotterdam on 31st May for demolition.

John Jordan writes: This ship was part of the Associated Humber Lines services. She is SS Harrogate built in 1925 by Ramage and Ferguson at Leith, for service to the European continent. She was a sister to SS Selby and both were scrapped around 1958.

Mike Goadby writes: This month’s unknown ship is the 1,113 grt steamship Harrogate, built in 1925 at Leith by Ramage & Ferguson Ltd. for the Wilson and North Eastern Railway and Shipping Co. Ltd. She was built for the Hull to Hamburg service, also Antwerp and Rotterdam when required. Her sister ship was Selby built by J. Duthie Torry at Aberdeen in 1922. Both ships were transferred to Associated Humber Lines Ltd. in 1935. Both ships were scrapped in 1958.

On the 12/09/1941 she was attacked by enemy aircraft off Southwold, Suffolk and suffered damage from a bomb exploding nearby. She was on passage from London to Dundee with general cargo. In May 1958 she was sold N.V. Vereenigde Utrechtsche Ijzerhandel, Utrecht for scrap arriving at Rotterdam 31/05/58.

Florent Van Otterdyk writes: The unknown vessel in November 2018 is Associate Humber Line’s Harrogate, of 1,029grt, built in 1925 by Ramage & Ferguson, Leith and scrapped at Utrecht in May 1958.